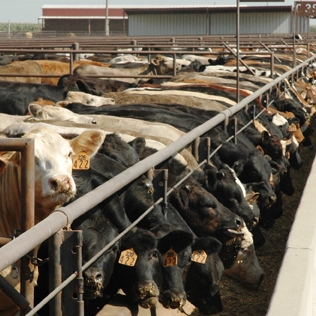 Cattle futures fell, heading for the biggest decline this week, on speculation that demand for U.S. beef will slow as consumers switch to cheaper pork and chicken. Hog prices also declined.

Slaughtering plants processed 368,000 cattle in the first three days of this week, down 3.2% from the same period a year earlier, U.S. Department of Agriculture data show. Supermarkets may have completed most of their buying before the Independence Day holiday on July 4, the busiest day of the year for outdoor grilling, according to Dick Quiter at McFarland Commodities LLC. While wholesale beef dropped 6 percent in the past four weeks to $1.9869 a pound, pork fetched $1.0698 a pound and chicken cost $1.0575, according to government data.

"Pork is considerably cheaper and there’s plenty of chickens around, so demand is relatively low for cattle," Quiter, an account executive, said in a telephone interview from Chicago. "It’s going to be hard to turn this cattle market around now that Fourth of July demand has passed."

Cattle futures for August delivery fell 0.4% to $1.199 a pound at 12 p.m. on the Chicago Mercantile Exchange, heading for the biggest drop since June 14.

Feeder-cattle futures for August settlement declined 0.3 percent to $1.44175 a pound.

Hog futures for August settlement fell 0.1 percent to 98.3 cents a pound on the CME. Prices through yesterday were up 4.8 percent for June and 15 percent this year.