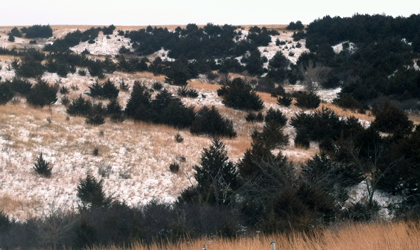 Cedar trees have been invading the prairies of the Great Plains and determine the best practices to manage the pesky plants has been challenging.
By: Pete Bauman, SDSU Extension, Range Field Specialist

The issue of cedar tree invasion into South Dakota’s rangelands tends to be a regional conversation. Those in the south central and southeastern portions of South Dakota understand well the challenges in controlling these invasive trees. There is generally broad agreement among most resource professionals that these trees are in fact changing our landscape in a negative way. However, forging a definitive path toward addressing the issue becomes a dilemma as best management practices are not always clear. Not only is control difficult, but the cedar tree has a long history of positive uses in shelterbelts and wildlife plantings. Therefore the issue becomes complicated by the debate over whether the appeal cedars have for humans and certain wildlife outweigh their overall threats to the landscape.

In February 2014, a symposium was held on cedar control in the Great Plains at the 67th annual Society for Range Management meeting in Florida. The symposium was organized to better understand the spread, control, and impacts of invasive cedar and juniper as major threats to Great Plains farms, ranches, and grassland ecosystems. Researchers from across the southern and central plains….range professors, economist, social scientists….spoke on the overwhelmingly negative impact these species have on the plains. The message was clear – juniper and cedar are spreading rapidly, the wave is heading north, they are creating changes on the landscape that are primarily negative, and the Dakota’s are the cedar frontier.

In a nutshell, the expansion of these species across the plains is now being dubbed the ‘Green Glacier’, and the reality is that this expansion will continue to impact rangeland productivity and management. The most challenging message to come from recent research is that cedar invasion appears to be primarily a product of removal of fire from the grasslands. While it is true that active planting of cedars will continue to create unnatural source populations, land management practices such as grazing do not significantly contribute to the spread of the plant. Simply put, the grand expansion of cedars is the by-product of active planting and fire exclusion. Where fire has been preserved or re-introduced as a management tool, the trees are generally controlled regardless of the other grassland management practices that occur.

We have two types of juniper species here in South Dakota that are of concern, the Rocky Mountain juniper (Juniperus scopulorum) and the eastern red cedar (J. virginiana). The Rocky Mountain Juniper is believed to be native to the Missouri River breaks region and the Black Hills, while the eastern red cedar is thought to be mostly introduced. For those unfamiliar with the difference, the juniper is more of a ‘bushy’ type plant while the cedar takes on more of an upright growth form typical of a pine or spruce tree. Eastern red cedars are the common tree utilized in shelterbelts and wildlife habitat plantings. Although juniper may be expanding in density and area in several regions of south central South Dakota, it is the eastern red cedar that appears to be the species of dominant statewide concern because of its popularity, hardiness in plantings, and appeal to birds which are the primary disperser of its seeds.

Escaped or volunteer cedar trees likely occur in every county of the state. Aside from initial plantings, volunteer trees are generally found in fence rows, under power lines, in hardwood shelterbelts, pastures, CRP, and other areas.

What can be done?
Biologically, cedars are tough. Their waxy coating and relative resilience can make them a formidable foe. Chemical applications are generally not practical, have mixed results, and can impact non-target vegetation. However, cedars are susceptible to two basic control methods. The first is that cedars lack the ability to re-sprout. While cedar saplings might cover a pasture, once they are dead, they are dead. Killing a small cedar can be accomplished easily through mechanical control either via chainsaw, hand-loppers, hand saws, ATV-mounted shears, or larger carbide cutters mounted to skid-steer loaders. When mechanically controlling cedar it is necessary to remove the tree below the lowest branch, so care should be taken if using rotary mowers.

The cedar’s second weakness is its susceptibility to fire – primarily when young. Fire can be an effective tool when applied to saplings less than 3 or 4 feet tall. The key to fire use is to ensure an adequate fuel load to create enough heat to kill the tree. This is best accomplished with resting the pasture for a full season prior to the burn. While larger trees can be killed with fire as well, these types of fires generally require implementation during hotter and dryer conditions (usually early spring). Burning in these conditions of increased fire risk requires experience and methods that most SD landowners currently do not have, so caution should be exercised.

The impacts of the invasion are immense if we look south. Texas, Oklahoma, Kansas, and Nebraska ranchers have lost large percentages of pastures, sometimes whole ranches, to the invasion. In these states ranchers have been forced to form community burn teams to combat the problem. We will likely be forced to employ the same tactics here in South Dakota in the not-to-distant future.

Below are some simple illustrations of the significant impact cedar trees can have on a grass land or pasture without the perception of a problem. Figure 2 is a photo of a portion of a section of CRP near Bruce, SD. Although several cedar trees are present, there does not appear to be much of a problem. 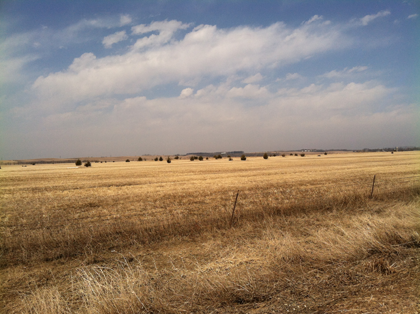 Figure 2: Cedar in a CRP field near Bruce, SD.
However, when further evaluation is performed across the entire section, a potential problem begins to take shape. Figure 3 below depicts the same section of land from an aerial view. While not overly obvious, this section is littered with volunteer cedar trees. 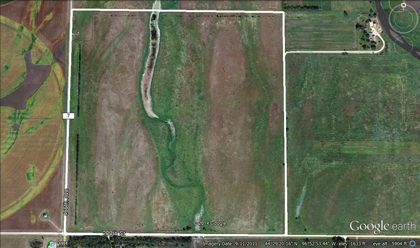 Figure 3: Aerial view of section of CRP depicted in Figure 2.

While not overly obvious, this section is littered with volunteer cedar trees. Upon further examination and a closer look, one can see that the land is in fact widely covered with trees that have likely escaped out of the planted shelter belts to the north and west. See Figure 4 below. 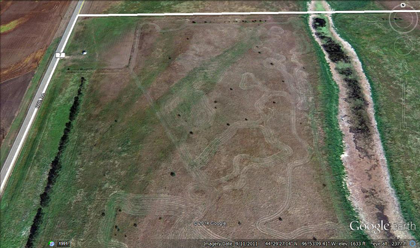 We then gridded the 640 acre section into 25 roughly equal blocks of about 25.5 acres to more accurately count the trees. Figure 5 depicts the results of that exercise. Note at this scale, it was only possible to count the trees that were obviously visible in the aerial image. It can be safely assumed that if these trees are present, likely hundreds or more saplings are hidden from view in the grass. In this simple exercise, we counted 348 trees outside of the shelter belts (or about 1 tree/2 acres). At a rate of 10 trees per hour, it would take nearly a week’s worth of work to remove even these sparsely populated, easily accessible trees. When combined with rough topography, difficult access, and much denser stands of volunteer trees, the enormity of the situation in the more rugged regions of the state becomes evident. 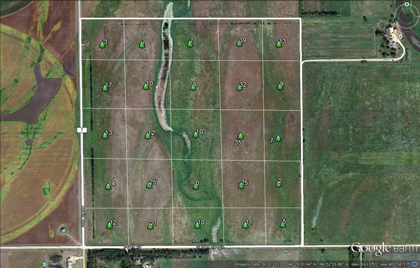 While it is beyond the scope of this article to go into all the details of burning for cedar control, SDSU Extension is available to those who may have questions in pursuing fire as a control strategy. See future articles here on iGrow for additional information on cedar control and burning in South Dakota. We commonly hear from ranchers in the southern tier of counties who are now recognizing that the best time to do something about their cedar trees was yesterday; the second best time is today!!