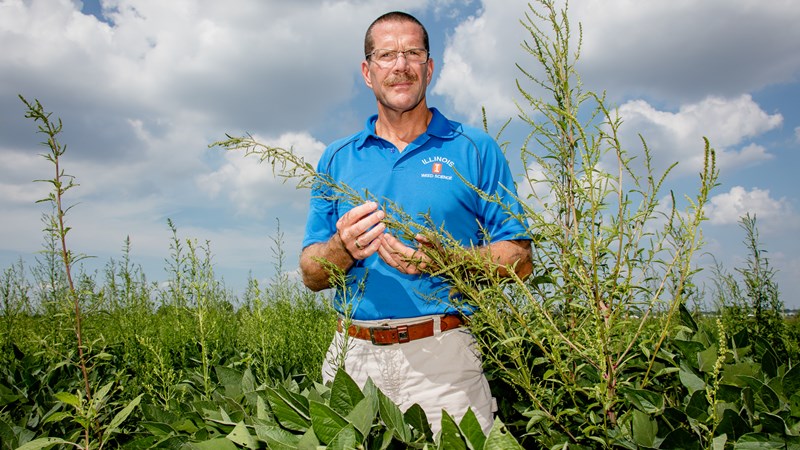 Aaron Hager is standing in a resistant waterhemp hot zone. The soybean rows surrounding him are a blanket of five-way herbicide resistance: atrazine, ALS inhibitors, PPO inhibitors, HPPD inhibitors and 2,4-D. The waterhemp population’s resistance to 2,4-D is telltale. As Hager leafs through pages of farm records, he realizes the central Illinois field is a 2,4-D virgin and has never been sprayed with that particular broadleaf herbicide.

Waterhemp is the bell cow of herbicide resistance. Hager, a weed scientist with the University of Illinois (UI), has witnessed waterhemp pile on genetic muscle and build documented resistance to herbicides from six separate site of action groups in the Prairie State. Yet, even more alarming are the consequences of stacked resistance in waterhemp. Once resistance begins stacking, what’s the snowball effect of a weed juggernaut?

Hager’s waterhemp hot zone contains metabolic HPPD resistance, and if his suspicions are correct, the metabolic resistance mechanism inside HPPD inhibitors might be a generalist instead of a specialist. Boiled down: Resistance to one chemistry might confer resistance to another, sight unseen. “Multiple resistant weeds may be better prepared to fight new chemistries, depending on the resistance mechanisms,” Hager says. “We’ll find six-way resistant waterhemp soon. It’s a mathematical probability exercise.”

Hager’s waterhemp arithmetic is a sobering study, filled with simple, but staggering numbers. Illinois’ combined corn and soybean ground totals roughly 22 million acres, and waterhemp is present on 75% of that acreage. In a given year, Hager estimates 5% of the acreage contains escapes (25 escapes per acre). If the average escape produces 50,000 seeds (which is only 10% of waterhemp’s potential), and only 10% of those survive, then approximately 10 billion new waterhemp plants are exposed to herbicides each year in Illinois. When numbers reach into the billions, even a tiny percentage of successful mutations ensures a horde of weed lottery winners. Just based on the maddening figures, Midwest farmland is a factory of herbicide resistance requiring constant farming vigilance.

Crop management practices fostered weed adaptability, but resistant waterhemp owes a huge debt of gratitude to primal promiscuity. Waterhemp plants are dioecious, either male or female. Females can potentially produce 1 million seeds with open access to any male pollen suitor. The waterhemp swinger’s ball never ends and is tailor-made for ensuring genetic diversity and promoting resistance genes. (Shared pollen means shared resistance.) If producer A develops Roundup resistance and next-door producer B develops Flexstar resistance, then resistant genes can be carried in pollen between fields to waiting females. The waterhemp populations on both fields become stacked with double resistance.

Producers find all forms of resistance surprises and are forced to learn or react on the fly. It’s extremely difficult to fight known entities of stacked resistance in waterhemp, but it can be debilitating to fight resistance to chemicals that have no historical record of use on a field or farm. Quite literally, even if a producer has never sprayed with a particular herbicide, resistance possibilities still lurk.

Going back 30 years, many producers had never heard of waterhemp. A native son of the Midwest, it once just wasn’t a blip on the radar … it wasn’t even on the radar. Fast forward to the 1990s: Waterhemp blitzed fields, adapted to agricultural chemicals in just 20 years, and jumped into the driver’s seat of regional weed resistance as the Midwest’s poster child of pigweed.

Waterhemp hoards resistance mechanisms, and even in the absence of herbicide use, the resistance mechanisms do not exit the population; they essentially become fixed. If an Illinois producer sprayed waterhemp in 1997 with a given chemical like Pursuit (an ALS inhibitor), and failed to control the population due to resistance, then the identical rate of Pursuit sprayed on the same field in 2017 likely will yield the same ineffective results. That applies even if the producer hasn’t sprayed an ALS-inhibitor over the entire 20-year span. Once resistance is selected in a waterhemp population, it stays and figuratively takes root. Time is not a resistant weed healer.

Typically, weed scientists don’t paint with an all-encompassing brush and declare an established multi-resistant weed as a permanent fixture of agriculture. Duration of resistant weeds is normally contingent on a fitness penalty factor: Does the acquired resistance mechanism make a particular plant less fit or less competitive compared with a herbicide-sensitive brother or sister plant? In the absence of a fitness penalty, there is no evolutionary reason for resistance to leave a weed population. The unsavory squatter or floater hiding in basement of the waterhemp complex becomes a permanent resident.

Waterhemp is able to stockpile resistance mechanisms with little fear of a fitness penalty. In a greenhouse trial, Hager’s colleague, UI weed scientist Pat Tranel, allowed glyphosate-resistant waterhemp to flourish for six generations before treating with glyphosate. Even after the sixth generation, the frequency of glyphosate-resistance remained the same. “Basically, you can’t rotate your way out of herbicide resistance,” Tranel says.

For all practical concerns, resistance becomes a permanent fixture on a given field, he explains: “I’d say a resistance lasts a minimum of 50 years for sure. At least I can tell a farmer: In your lifetime, once you’ve got a particular kind of resistance, you’re stuck with it.”

However, for all of waterhemp’s belligerence, Tranel says Illinois weed focus might shift to a pigweed cousin of the South: Palmer amaranth. Is the Midwest on track for a pincer movement between waterhemp and Palmer? “In 10 years we might not be worried about waterhemp if it’s displaced by Palmer,” Tranel explains. “In dual fields, Palmer takes over and has the upper hand.”

Palmer creep is ongoing and more Illinois counties (one-third have Palmer presence) are shaded in every year. Stick a combine into a field blanketed with waterhemp and the hopper will still fill with bushels. Palmer is a different beast, and its ability to reduce yield is second to none. “We lose bushels every year to waterhemp, yet still harvest a decent crop,” Hager says. “With Palmer, take similar density and the comparison goes out the window. Competitive ability on a per plant basis distinguishes Palmer.”

Biology wins over chemistry in the end, and agriculture can either fight from the front or chase from behind, according to Hager: “The big difference from 30 years ago is we’ve got resistance in species that accumulate resistance mechanisms. As we learn more about fitness penalties, we know weed resistance is only going to become more common. Resistance doesn’t diminish because it has no reason to do so.”

“When new technologies come out, we’ve got to steward them with evolution in mind. Depending on rotation or hybrid, chemical options do not work by themselves, but people don’t necessarily like that,” he says.

Two effective modes of action have to target every weed to truly combat resistance, he says. A pre-emerge and a post application, aren’t targeting the same individual plants. Waterhemp’s history of multiple resistance indicates the “two effective modes” strategy isn’t bullet proof. “Ultimately, farmers really need to think seriously about non-chemical strategies to control weeds,” Tranel adds. “That’s not what they always want to hear, but that is the reality of what we’re facing.”