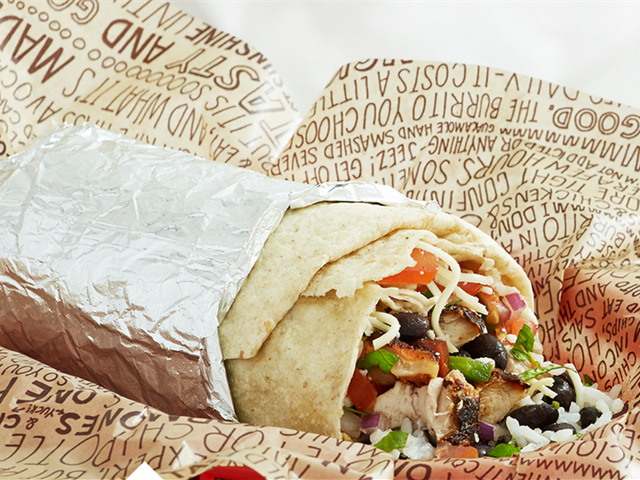 Thanks to the World Health Organization, Chipotle has wrapped itself into a giant GMO-free pickle. To help the big burrito marketer better understand the repercussions of its misleading marketing campaigns, we’re asking you to sign a petition that urges Chipotle to ban pork and beef from its menu.

A controversial classification, for sure, but one Chipotle would be hypocritical to ignore.

That’s because when the WHO classified glyphosate as “probably carcinogenic” earlier this year, Chipotle announced with great fanfare that it would remove all ingredients containing GMOs from its menu, since the herbicide glyphosate is used extensively in the production of GMO corn and soy.

Here’s what Chipotle said when it banned GMOs from its menu: “The world Health Organization designated Glyphosate as ‘probably carcinogenic to humans.’ The use of glyphosate is extremely widespread. More than 9% of the landmass of the continental United States is planted with crops genetically modified for glyphosate resistance. Given the concerns surrounding these types of GMOs and the chemicals associated with them, we felt it was particularly important to seek out non-GMO ingredients when possible.”

From that statement, one would naturally assume Chipotle would be equally shy about putting red meat  in their burritos. So why doesn’t Chipotle make a similar announcement banning beef and pork?

In fact, there’s a Change.org petition calling on Chipotle chairman Steve Ells to do just that. The petition says: “Just as GMOs were removed from most of their menu items because glyphosate is a class 2A carcinogen, pork and beef now need to be removed as well.”

The petition further states, “we feel it is particularly important to seek out alternative ingredients.” Except, well, there aren’t any alternative ingredients for pork and beef…unless Chipotle switches to an all-vegetarian menu. That, of course, is an unlikely option since it would vastly reduce Chipotle’s target audience.

Therein lays the Catch-22. Steve Ells and his crew must decide whether to continue with their hypocritical stance on GMOs while at the same time selling equally dangerous – says the WHO – pork and beef, or stop pandering to fads and pseudo-science scaremongers by putting GMO foods back on the menu.

We think one way for Chipotle to get the message is to sign the Change.org petition and leave a comment – as many others have done – to stop the hypocrisy. Here’s a sample comment: “I’m signing because ‘Stupid’ has got out of control and Chipotle is leading the parade of stupid down the path of fear.”