Climate Change May Reduce Some U.S. Grain Harvests by Half 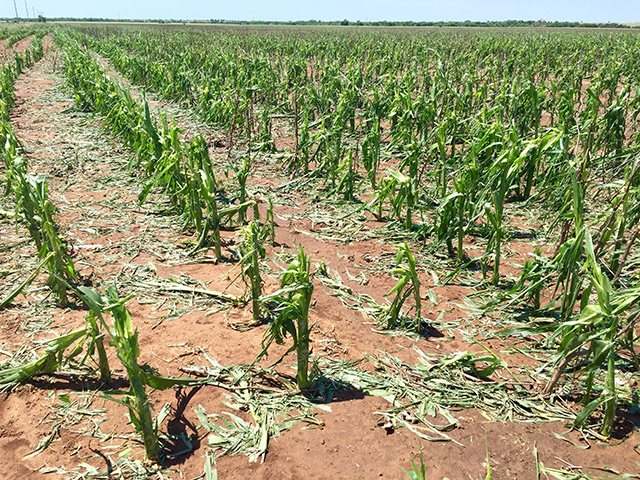 Some of the most important U.S. crops, from wheat to soybeans, are at risk of substantial damage from climate change.

Higher temperatures may cut the wheat harvest by 20 percent by the end of the century without efficient carbon reductions, according to a study by researchers including the Potsdam Institute for Climate Impact Research and the University of Chicago. Yield reduction could reach 40 percent for soybeans and almost 50 percent for corn, relative to non-elevated temperatures, the group said in a report released Thursday.

"The effects go far beyond the U.S., one of the largest crop exporters," the researchers said. "World market crop prices might increase, which is an issue for food security in poor countries."

For each day above 30 degrees Celsius (86 Fahrenheit), corn and soybean harvests could lose about 5 percent, according to the findings. Those temperatures will be more common amid “unabated” climate change, and yields could be further lowered if temperatures are above 36 Celsius. The researchers ran a set of computer simulations of U.S. crop yields.

Without further pledges to curb emissions, world temperatures are set to rise by as much as 3.4 degrees Celsius compared with pre-industrial levels, according to a November report from the United Nations’ Environment Program. Scientific consensus is that any increase above 2 degrees would lead to catastrophic changes to the climate -- from extreme droughts and coastal flooding to disruptions to world food supplies.

In 2016, global temperatures were record hot for a third straight year, according to U.S. National Oceanic and Atmospheric Administration figures released this week.

"Increased irrigation can help to reduce the negative effects of global warming on crops," the crop study’s researchers said. "This is possible only in regions where sufficient water is available. Eventually limiting global warming is needed to keep crop losses in check."

Not all climate research has found the same results. A study from the European Union’s Joint Research Centre last year said wheat yields may benefit from higher carbon-dioxide concentrations in the atmosphere, while corn could suffer. The uncertain position of the Donald Trump administration is clouding the future of environmental research conducted by agencies such as NASA and the National Oceanic and Atmospheric Administration. Trump takes office Friday.

Rising temperatures have yet to slow growth in U.S. crop yields. U.S. corn and soybean output has soared in recent years, aided by increased plantings of genetically modified seeds. Corn yields reached a record 174.6 bushels per acre in the 2016 season, up 37 percent from two decades prior, U.S. Department of Agriculture data show. Soybean yields at 52.1 bushels an acre were also an all-time high.

Still, crop production has been vulnerable to dramatic weather shifts. In 2012, a drought across American growing regions shriveled harvests and sent corn prices to an all-time high.