Climate Change Research is All Wet

Climate change can be a difficult topic of discussion, especially when the mainstream media does a poor job covering it, says Chris Anderson, the assistant director of Iowa State University's Climate Science Program.

"What you hear on TV is weather trends described as climate change, so that becomes confusing," he says. "This is a terminology problem."

In other words, it's a case of mixed-up cause-and-effect, he says. Another problem is most of the climate change debate is centered around atmospheric temperature gains, but the real action is occurring elsewhere - we've been looking in the wrong place.

Nearly two-thirds of the "added energy" associated with climate change has been pumped into Earth's oceans. Average ocean temperatures have climbed about 0.9°F in the past century. That may not seem like much, but Anderson and others who study weather trends say a warmer ocean will produce a higher frequency of wet springs in the Midwest.

Here's how it works - a warming ocean produces more water vapor, which in turn fuels U.S. rainstorms in the spring. Anderson and his colleagues looked at precipitation data in Iowa for the past 100+ years, and flagged each year that had a wet spring - defined as having 15 or more inches of rainfall in April, May and June. They found that historically, Iowa had around a 10% chance of this occurring. Since 1981, it's happening one out of every three years, Anderson says.

By 2030, wet springs could hit the U.S. as much as 40% of the time. In fact, the wet spring / dry summer combo that plagued the Midwest last year could be much more common in the future, Anderson says. 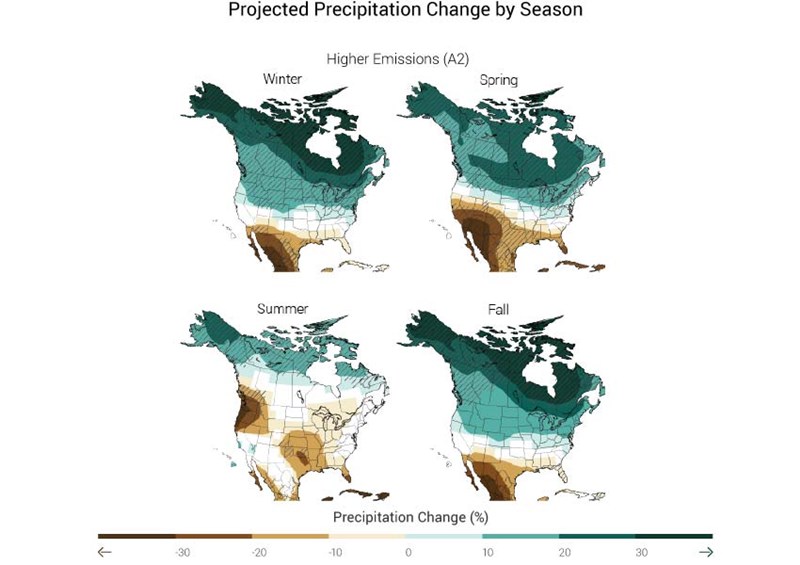 One of Anderson's goals is to help farmers prepare for any plausible weather scenarios. For example, if more frequent wet springs are projected, highly-erodible land is more vulnerable than ever, and cover crops and other conservation practices are more valuable than ever.

With change could come opportunity. As the National Climate Assessment recently reported: "Taking advantage of the increasing length of the growing season and changing planting dates could allow planting of more diverse crop rotations, which can be an effective adaptation strategy."

Other institutions have taken a renewed interest in helping farmers remain resilient amid potential future climate changes. Purdue University is one of 10 universities participating in the Sustainable Corn Project, funded by the USDA National Institute of Food and Agriculture. Purdue's team is studying how practices such as drainage water management can make crops more productive even with variable weather and climate, says Eileen Kladivko, Purdue agronomy professor.

"We are researching practices that are not yet widely adopted across the state," she says.

Controlled drainage, for example, raises the outlet of the drainage system immediately after spring planting to give crop increased availability to water during dry periods.

"While that system has shown only small increases in crop yields in some years, the potential benefits may become more important in the future due to climate variability and change," Kladivko says.

To see what else the NCA is saying about how climate disruptions could affect agriculture, click here.