Commodities Set to Break Into Bull Market After Four-Year Rout 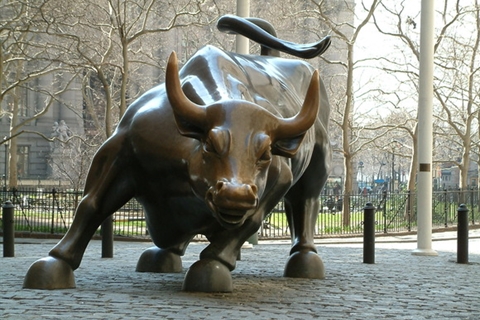 The four-year bear market that pushed commodities to the lowest level in a quarter century is coming to end as supply constraints drive a recovery in everything from soybeans to zinc.

The Bloomberg Commodity Index, which tracks returns from 22 raw materials, is on track to close more than 20 percent above its low on Jan. 20, meeting the common definition of a bull market. While the index has come close to breaking out of the bear market that began at the end of 2011, it has never sustained a rally long enough, until now. It’s still down about 50 percent from the high reached in that year.

Raw materials have outperformed bonds, currencies and equities this year on speculation that supply disruptions and production cuts are whittling away the surpluses that caused the biggest price collapse in a generation while demand improves. Citigroup Inc. said last month that commodities had turned a corner, increasing its forecasts for metals to grains amid an oil-led recovery.

“The broad-based recovery in commodity markets this year has tipped several
markets into bull market territory,” Mark Keenan, head of commodities research for Asia at Societe Generale SA in Singapore, said by e-mail. “Overall, sentiment is good but remains cautious, the market is evolving significantly, specifically across the oil markets.”

Brent crude has surged above $50 a barrel from a 12-year low in January amid disruptions from Nigeria to Venezuela, and as U.S. output declined, pressured by OPEC’s policy of sustaining production. The global oil market has flipped to a deficit sooner than expected, Goldman Sachs Group Inc. said in May.

Prices of zinc, used to rustproof steel, climbed above $2,000 a metric ton for the first time since July last week after mine production cuts by Glencore Plc and others. Goldman Sachs has dubbed zinc the “bullish exception” among metals.

“Zinc has been the best performing industrial metal this year, supported by
fundamentals,” Keenan said. “It should continue to improve over the medium term as the concentrate market moves into structural deficit and the recent cutbacks take hold.”

Soybean meal and soybeans have the strongest returns of any commodity on the Bloomberg index this year. Futures for the agricultural products used in livestock feed and cooking oil are up 58 percent and 33 percent, respectively, as floods reduce crops in South America and concern mounts that dry weather will cut U.S. output.

Gold and silver are also among the strongest performers this year after concern over the health of the global economy and a retreat in the U.S. dollar bolstered demand for precious metals as stores of value.

The recovery has boosted the shares of the miners, drillers and farmers supplying the world with raw materials. The Bloomberg World Mining Index is up 23 percent after a three-year collapse, with BHP Billiton Ltd., the world’s biggest mining company, up 7.6 percent. Exxon Mobil Corp. has advanced about 13 percent while Archer-Daniels-Midland Co., one of the largest U.S. grains traders, has risen 19 percent.

China’s economy will have to stabilize and U.S. industrial production recover for there to be a sustained recovery in commodities prices, Dominic Schnider, head of commodities and Asia-Pacific foreign exchange of the wealth-management unit at UBS Group AG, said by phone. Until that happens, they may retreat again, he said.

“Commodities have outperformed, that’s the reality,” Schnider said. “I still think prices can fall in the short run, they should find a bottom during summer. I think prices of commodities in general, not so much base metals but predominantly energy, will come off again.”