Considerations for Winter Injury and Winter Kill in Alfalfa 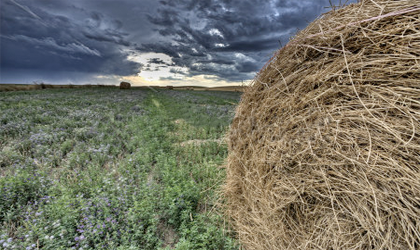 Main concerns about alfalfa production during this time of the year are the potential for winter injury and winter kill. We have had a pretty mild winter with some cold temperatures and some above freezing temperatures for the most part. However, the lack of snow cover is one of the main issues producers are worried about for the next season’s crop production, as alfalfa plants could certainly die if exposed to extremely cold temperatures.

In general, alfalfa plants can tolerate up to three weeks of winter injury before the plants are killed. The length of time will be less if soil temperatures are near freezing and longer if the soil is colder. This is primarily due to the plant being forced into a deeper dormancy when the soil is colder. The plant is therefore less likely to leave dormancy in early-spring conditions, and hence becoming susceptible to an early frost.

What are the factors that could affected alfalfa plants this winter leading to a winter kill?

When and where to look for winter injury and winter kill?

Once the snow cover melts, it is advised to walk through your field, assessing for potential problems with your upcoming season’s alfalfa production. Here are some tips that will help you get started on where to look for possible winter injury:

If you think your stands have been injured, you can follow this guideline to make decisions to either keep or replant your alfalfa field after winter injury and winter kill.