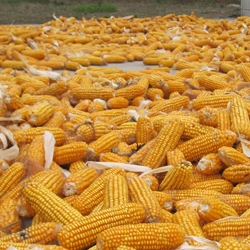 Corn prices peaked in August, moved sharply lower in September, and have been in a sideways pattern over the past two months. Within that sideways pattern, prices have moved higher over the past two weeks, with March 2013 futures trading within $0.10 of the post-September high. The recent rally has been fueled by some supply concerns and more optimism about near-term demand.

There are two concerns about potential supply of corn in 2013. First, the on-going wet weather in Argentina may reduce the magnitude of planted area of corn relative to intentions. Fewer acres would threaten the projected rebound in production. The USDA has forecast the 2013 harvest at a record 1.1 billion bushels, a third larger than the drought-reduced harvest of earlier this year.

The USDA will update the forecast in the monthly World Agricultural Production report to be released on December 11, but a large change in that forecast is not expected this early in the season. During last year's drought, the forecast of production was not reduced in December, but was reduced sharply in January and again in February. The potential implications of wet weather on acreage and yield are even more difficult to discern than the implications of drought conditions.

The second supply concern is for the upcoming U.S. crop in the face of continuing widespread drought conditions. The latest U.S. drought monitor map shows exceptional drought conditions in large portions of the Plains states and severe to extreme drought conditions extending to the Mississippi River and in northern Illinois and southern Wisconsin.

Significant drought conditions also persist in some southeastern states. Very dry soil conditions underscore the need to replenish soil moisture and for timely rain during the 2013 growing season. The production risk of continuing drought conditions is being balanced against the potential of a record corn harvest if acreage is not reduced and 2013 growing season weather is generally favorable for corn yields. The balancing act is reflected in futures prices for the 2013 crop that are below old-crop prices, but high by historic standards.

Unshipped export sales totaled only 278 million bushels as of November 22, 238 million less than on the same date last year. New sales need to average17 million bushels per week for sales to reach 1.15 billion bushels. Sales exceeded that average for the two weeks ended November 22 and the more rapid pace may continue as supplies of competing grains are reduced.

Domestically, ethanol production continues to be well below the rapid pace of a year ago. Production last year, however, was accelerated by the impending end to the blenders' tax credit. Through the first quarter of the 2012-13 marketing year, cumulative ethanol production was about nine percent less than during the same period last year.

The USDA has projected a 10 percent decline in the amount of corn used for ethanol production during the current marketing year. The decline in expected ethanol production reflects the plateauing of domestic consumption, increasing imports from Brazil, and steady to declining exports of ethanol. The so called blend wall will continue to limit domestic ethanol consumption and production, but corn use this year should at least reach the USDA projection.

The rate of feed use of corn is not known. The USDA projects use for the year at only 4.15 billion bushels, nearly nine percent less than apparent use of last year. However, marketing year feed and residual use estimates and projections are confused by the harvest of a large quantity of corn before the start of the 2012-13 marketing year on September 1.

Taken together, current livestock inventories, slaughter numbers, and slaughter weights suggest strong overall feed demand. The number of cattle on feed on November I was five percent less than that of a year ago, but the number of dairy cows during October was only 0.3 percent less.

The USDA's December 1 stocks estimate and 2012 final U.S. production estimate to be released on January 11 will add some clarity to corn market fundamentals. Current conditions point to continued strong corn prices until then.