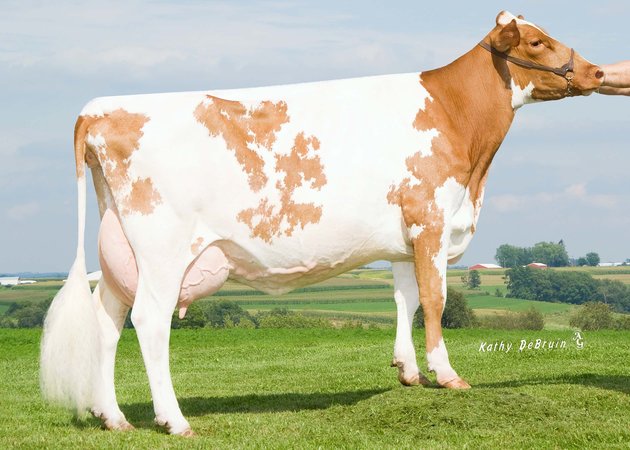 She will be honored during World Dairy Expo in Madison, Wis., Oct. 3 during the International Guernsey Show.

MADISON – First, Lorilyn and her mother defied the odds and became the first mother-daughter Guernsey duo to each produce more than 40,000 pounds of milk per year. As if that weren’t enough, Lorilyn’s daughter went on to do the same, becoming the first Guernsey in history to be the third generation to produce more than 40,000 pounds of milk in a year.

No wonder Lorilyn gets to be Cow of the Year.

The Wisconsin Guernsey Breeders Association has selected Coulee Crest Nick Lorilyn as the 2014 Wisconsin Cow of the Year. Lorilyn, who is 6 years old and the mother of more than 20 nationally ranked progeny, will be honored during World Dairy Expo in Madison on Oct. 3 during the International Guernsey Show. She is bred and owned by Kurt and Scot Peterson of Cashton.

"The dairy cow is an important part of the economic landscape of Wisconsin," said Wisconsin Department of Agriculture, Trade and Consumer Protection Secretary Ben Brancel. "Each breed brings its own attributes to the success of the industry, and the Guernsey breed is known for the high fat and protein components in its milk. Lorilyn is an outstanding selection, exemplifying fine genetics and quality milk produced by Wisconsin cows. The multiple generations of high-producing females in the family are a tribute to Kurt and Scot’s excellent breeding and management practices."

Lorilyn was 3 years old when she produced 42,437 pounds of milk while being milked three times per day in 365 days, according to her Dairy Herd Index record. For perspective, that’s 4,935 gallons of milk in a year, or about 14 gallons per day. The average Guernsey on Coulee Crest farm produces about 21,000 pounds of milk every year, Kurt Peterson said. The state average for Guernseys is around 17,000 pounds per year, he said.

The Petersons milk 210 cows on Coulee Crest. About 85 are registered Guernseys, and the rest are grade Holsteins.

Each year, a Wisconsin purebred cattle association selects a cow to represent her breed as the Cow of the Year at World Dairy Expo. The honor is rotated annually between the seven major dairy breeds.

"The genetics of the Lorilyn family have and will continue to make a distinct influence on the future advancement of the Guernsey breed," said Deb Lakey, executive secretary of the Wisconsin Guernsey Breeders Association. "We couldn't be more excited and proud of the Peterson Family and their accomplishments breeding this tremendous cow."

The Cow of the Year ceremony is scheduled at 9:30 a.m. Friday, Oct. 3 at the Alliant Energy Center. Secretary Brancel and 67th Alice in Dairyland Zoey Brooks will present the award.

World Dairy Expo takes place from Sept. 30 to Oct. 4 at the Alliant Energy Center in Madison. The annual dairy industry trade show and cattle show draws more than 70,000 visitors to Madison from around the world. Learn more at worlddairyexpo.com.