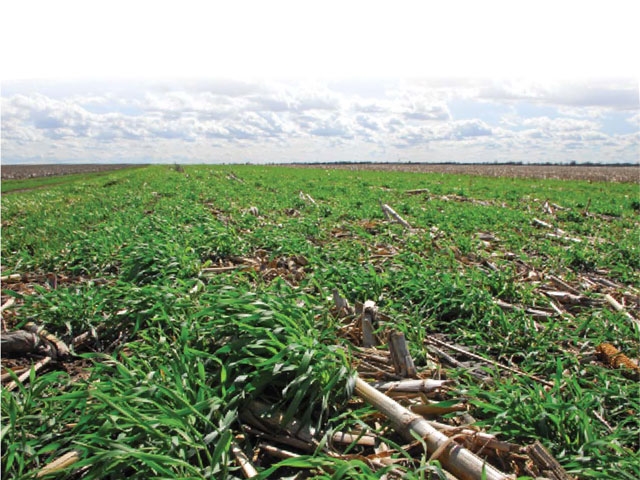 A series of strip trials comparing soil beneath a cover crop to an adjacent strip with no cover crop is revealing increases in microbial activity, water soluble carbon, water infiltration and carbon to nitrogen ratio.
( Darrell Smith )

Side-by-side strip trials over several clients’ fields suggest soil health improvements from cover crops might show up faster than expected, says Farm Journal Field Agronomist Ken Ferrie. After only one year of cover crops in a corn–soybean rotation, he has documented improvements in microbial activity, carbon storage and water infiltration.

But getting to the point of actually measuring results was somewhat of a detective adventure. Reviewing yield maps and soil tests from thousands of acres, year after year, left Ferrie and his staff puzzled why some fields or parts of fields refused to yield with identical soil types.

For example, in one field of Drummer silt loam soil, 15 years of yield maps proved one area was not keeping up with the rest of the field.

In that field as well as others, Ferrie and crew fixed the obvious problems, such as pH, fertility, compaction and drainage in the low-yielding zones, and eliminated disease or insect pressure as the cause of the yield difference.

“Those were easy fixes,” he says, “but the areas still lagged behind in yield. We could see something was different in the low-yielding zones—appearance, soil structure, even the odor—compared to the higher yielding area. Finally, there was no other explanation except soil health.”

“In the one-day carbon burst test, we found 45% more respiration in the higher-yielding soil,” Ferrie says.

The experience ignited Ferrie’s passion to learn about soil health and how to improve it. Cover crops and no-till were logical first steps, but documenting the results were challenging.

“Many of the tests used to document soil health produce varying results during the growing season and from one year to the next,” Ferrie says. “That’s because they measure biological processes in the soil, which are affected by many factors, such as weather and the previous crop.

“Numerical scores from soil health tests can vary from day to day during the growing season. I’m not sure we will ever get numerical scores we can compare from one year to the next. We needed another way to see if our soil health practices made a difference.”

Side-by-side strip trials are proving to be the answer. Ferrie uses soil health tests to study the impact of cover crops in many fields, where both strips—with and without a cover crop—are affected by the same weather, previous crop, etc.

After five years of strip trials across his customer base, Ferrie has learned:

“After one year of a cover crop, we found an 8% increase in water soluble carbon,” Ferrie says. “After two years, we found a 27% increase.”

The higher carbon to nitrogen ratio indicates cover crops are storing more carbon in the soil. That results mainly from the cover crop’s root mass, as well as the above-ground vegetation, and it’s a good thing. “But remember a higher carbon to nitrogen ratio puts pressure on crops like corn early in the season, because of nitrogen tie-up,” Ferrie notes. “Be sure to provide some nitrogen for the young plants early in the season, to protect them from this carbon penalty.

“We have much more to learn about using cover crops to improve soil health,” Ferrie says. “Various covers will have different impacts in different regions of the country. But I’m becoming confident we are moving the needle from a soil health perspective. Our trials seem to indicate that it won’t take quite as long as we thought to make a measurable difference in soil health.”

So far, Ferrie’s strip trials have not produced a consistent yield benefit. “I think one will eventually show up, as soil health improves,” he says. “This will be very important because farmers, especially in cash rent situations, need to know how long it will take for them to recover the costs of improving their soil’s health.”

A long-term nationwide series of strip trials similar to Ferrie’s is being conducted by the Soil Health Partnership (www.soilhealthpartnership.org), an initiative of the National Corn Growers Association. It should shed some light on yields and costs, as well as soil health benefits, Ferrie notes. “This effort looks like it will produce valuable information,” he says.

Although it’s not directly related to soil health, Farm Journal Field Agronomist Ken Ferrie was pleased to document a weed suppression benefit from his cover crop studies in 2016. “If a cereal rye or cereal rye–radish cover crop mixture, planted ahead of soybeans, was thick enough when we killed it, there was a noticeable reduction in the waterhemp that escaped our herbicide treatment,” he says.