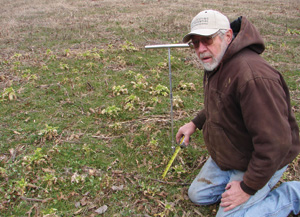 Tips to ensure a clean kill of annual ryegrass

Too often, pioneers don’t get the credit they deserve. There’s a class of farmers whose curiosity and optimism drive them to seek practicality and profitability in what appear to be crazy, risk-taking ventures. The early adopters of no-till experienced failures but also doggedly chalked up successes to the point where no-till practices are used on an estimated 90 million acres today, according to USDA.

It is this same group of hearty individuals that are now directing their curiosity toward incorporating cover crops into their no-till operations. The hopeful outcome is to boost their
profit margin and overall farm equity. University Extension research shows that annual grasses, small grains, legumes and vegetable root crops are being used to cut input costs, boost yields and provide green forage for grazing, replacing hay production and feeding expenses.

One of the cover crops that does double duty to achieve all of the above benefits is annual ryegrass. It comes with a caveat: using a cover crop such as annual ryegrass "involves a learning curve," says Dan Towery, agronomy consultant with Ag Conservation Solutions in Lafayette, Ind. With an extensive and fibrous root structure, unlike other cover crops, annual ryegrass can be a challenge if you don’t do your homework and adjust to adverse weather conditions, he cautions. "You need to know the growth pattern of annual ryegrass and use the proper system to kill it."

The biggest challenge in getting a good ryegrass kill is working with the weather, according to Mike Plumer, farmer and consultant with Conservation Agriculture near Creal Springs, Ill. Pay attention to the maturity stage of ryegrass and the ambient air temperature, Plumer advises.

Both consultants say annual ryegrass is ideally sprayed with glyphosate once the temperature gets above 50°F (when annual ryegrass actively starts growing) and before it reaches the first joint stage, or 7" to 10" tall. Ryegrass is easier to kill young, but there will be less mulch left on the ground. Larger plants (less than 16") can be controlled with warmer expected temperatures, but wait too long to spray and the plants will be entering the boot stage, with the threat of seed production. Also, the plants are producing lignin in the stem at this stage, tying up nitrogen and making it unavailable to young plants, and residue decomposition is slowed.

When the weather doesn’t cooperate and you can’t get an early kill, things can head south. If La Niña hangs around this spring, farmers might be faced with another cool and wet spring in the eastern Corn Belt, so they will need to plan ahead or risk planting delays. The key is to get organized for a spring burndown, and that might entail the use of an ATV sprayer for wet, warm conditions.

Choose your weapons. Plumer says to be ready to spray, but you need sun for maximum effect from a herbicide that kills by translocation. His research shows kill success using a souped-up version of glyphosate such as 32 oz. of Roundup WeatherMax, which has a surfactant; or add your own surfactant, such as AMS, to a glyphosate formulation. Use 10 gal. of clean water per acre with a low pH, or modify it with citric acid and include ammonium sulfate, which is "mandatory," Plumer says. The cost of the additives is less than $1 per acre. He recommends using flat fan nozzles on the sprayer at 30 psi for best coverage.

Plumer cautions against using atrazine in a tank mix with glyphosate, a common dealer applicator mix used to take out winter annuals in no-till fields. His research shows the atrazine (a photosynthetic inhibitor) interferes with the glyphosate translocation in annual ryegrass, so you’ll have a weakened plant that will not be as responsive to a second application.

Mix it up. Noting the need to change the herbicide program, Bill Johnson, a weed science professor and researcher at Purdue University, suggests alternating glyphosate applications with another postemergent translocator such as Select herbicide. "This is adequate to delay the onset of plant resistance," he says.

Nick Bowers, grower and owner of KB Seed Solutions, suggests mixing 6 oz. to 8 oz. of Select, 12 gal. to 15 gal. of water and an adjuvant such as AMS or MSO (methylated seed oil).

Time to spray. Plumer’s research shows this glyphosate mix is most effective when sprayed on annual ryegrass in midmorning when daytime temperatures reach 60°F and nighttime temps don’t fall below 40°F. Spraying should cease in the early afternoon to get at least three to four hours of sunlight on the sprayed ryegrass. The longer the plant can interact with the glyphosate and sunlight, the better the kill, which has been as high as 99% in test plots.

Towery says that if you are spraying in cool conditions, you should be prepared to spray a second application. Anything above 60°, and a good kill can be expected if the ryegrass hasn’t jointed (meaning it has entered the reproductive phase or started head development). Spraying too early or in cool temperatures will just weaken the stand, making it harder to get a complete kill on the second application due to weakened translocation ability. Conversely, Plumer says, if you spray too late, the ryegrass will be jointed.

You don’t want the plant to go to seed at this point in its physiology. Translocation has slowed, making your glyphosate application less effective and therefore requiring more herbicide horsepower.

It’s gotten ahead of you. Should you find yourself with knee-high stands of ryegrass due to uncooperative weather, try this per-acre recommendation from Chris Nuest, a farmer and herbicide applicator near Winamac, Ind.: Mix 2 qt. of Roundup and 0.5 oz. of Basis, and add AMS (amount depends on water pH) and a pH reducer. Nuest says another addition to the same mix could include Balance Pro at label rates, depending on your soil type.

Once the annual ryegrass is sprayed with a glyphosate mixture, industry recommendations are to wait a week before planting. "I don’t know any people who follow that recommendation," Plumer says. "Actually, 12 hours is probably enough if the plant is transpiring, and in warm weather probably less, although I have never checked it.

"Some of my cooperators have done 10 to 12 years of ryegrass in a row without any problems; but they always scout fields to make sure there are no escapes after the crop is planted," Plumer says. "They use multiple herbicides and rotate them. Where there are weed resistance problems, you’ll find there is poor management and five or more years of using only one herbicide."

Dave Robison, an agronomist with CISCO, likes annual ryegrass for its nutrient scavenging and soil building benefits, but suggests it only "to folks who are good managers who will stay on top of it in the spring," he says.

As in any new venture that pokes at the edges of a limited knowledge base, farmers working with cover crops face a blank page. It’s their attitude, their soils, their local weather. "There is no recipe," Towery says. "There are still gray areas where only experience will lead to the answers."