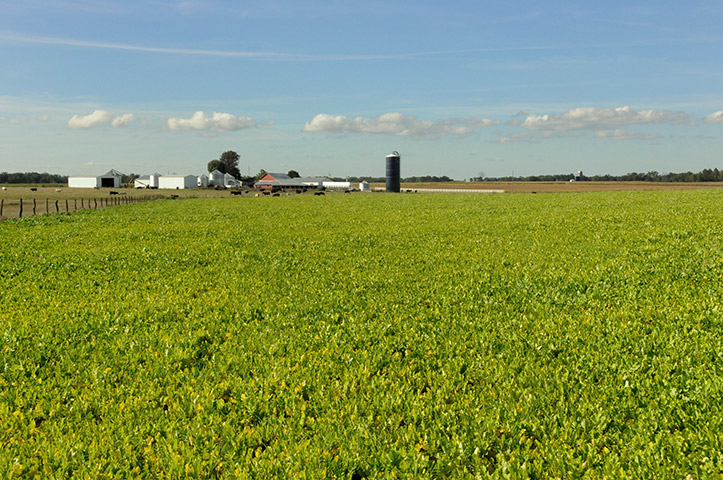 Although they complicate management, cover crops can increase diversity and improve soil health in various ways

When you can spot a new practice from the highway, without even looking for it, it’s about to go mainstream. The latest example is cover crops.

Dan Towery, conservation consultant with Ag Conservation Solutions of West Lafayette, Ind., and Farm Journal Field Agronomist Ken Ferrie agree that cover crops offer significant soil health benefits. But just like any other practice, you need to do some homework, start small and then expand as you become more confident.

"A variety of crops in a rotation increases microbial diversity and helps manage insects and nematodes," Ferrie says. "Growing a legume cover ahead of corn can reduce the requirement for nitrogen fertilizer.

What to expect. It might take many years to make big changes in soil health, especially if soil has been abused, Ferrie says.

"We have 2,000 acres in a corn, soybean, cereal rye rotation," explains farmer Steve Berger from Wellman, Iowa, who has no-tilled for 35 years and used rye as a cover for 10 years. "While it’s been challenging, especially to grow corn after the rye cover, we have seen organic matter creeping up, and we’ve had significant rains where we’ve avoided erosion."

In some situations, you might see signs of improvement fairly soon. In a one-year study, Ferrie saw how a rye cover crop improved carbon content, surface hardness, bulk density and water infiltration.

However, Ferrie has seen few situations where a cover crop actually provided a short-term financial return. "Perhaps we’ll find examples with future research," he says. "But it’s worth doing for stewardship and to increase the productivity of land for your heirs." Soil will improve some every year you grow a cover crop, Towery says. But how soon you’ll see measurable yield improvement depends on field history and what limiting factors, such as weather, are present in a given year.

"Finding problem areas in your soils will tell you which cover crops to plant," Ferrie says. "For example, if your soil is in pretty good health with good aggregate stability and waterholding capacity but short on mineralizable nitrogen, consider legumes such as clovers or Austrian peas.

The learning curve can be steep. Consult neighbors and other local sources to find out what covers are being grown successfully in your area and how to manage them. Online cover crop selection tools, such as the one published by the Midwest Cover Crops Council (www.mccc.msu.edu), can be helpful, too.

"When farmers ask me for advice, my first question is to ask them where they are from," Berger says, "because using cover crops is very geography and environment dependent." If you farm rented land, keep the landowner informed as you make your plans. Explain what you’re doing, and make sure he or she is supportive. Call on your local Natural Resources Conservation Service staff and ask whether you qualify for cover crop cost-share incentive programs.

Your first cover crop. "Start on a few acres," Ferrie says. "Expect problems, and don’t be discouraged—learn from them and make changes."

You can learn a lot by planting small plots of covers in your garden or sweet corn patch and watching how they perform, Towery adds.

In cooler regions, crops that winterkill, such as oats and radishes, make good first-time covers.

"They eliminate the need to kill the cover crop in the spring," Ferrie says. "As you transition to covers that must be killed in the spring, plan your spray program or inform your custom applicator well in advance. In its own way, getting a timely kill of your cover crop is just as important as timely planting of row crops."

Planting cereal rye ahead of soybeans or an oats/radish mix ahead of corn are good starter covers for many parts of the Midwest. Mixtures provide more diversity than a single species.

Towery cautions that planting radishes in timely fashion after harvest "is a real challenge in northern areas."

"Planting too late is the most common mistake by beginning cover crop growers," Towery says. "If you’re too late, you won’t reap all of the benefits."

He suggests planting an earlier soybean variety or trying cover crops on an early harvested crop such as sweet corn, silage corn or seed corn.

"Be flexible, and switch to a different cover crop if the weather prevents you from planting your first choice on time," Towery says.

In-season impact. "Cover crops help manage certain soil diseases and parasites, but they also can bring in some pests," Ferrie says. "Understand which diseases may move from covers to row crops and insects the covers may draw in, such as cutworms or armyworms."

"Stay on top of your pest scouting in the following row crop," Towery advises. "Consider the re-cropping intervals and carryover potential from residual herbicides, especially with post-emergence applications. Carryover isn’t often a problem, but it can occur. As soil health improves, herbicides will degrade faster due to improved biological activity, and carry­over will become less of a concern."

"The additional residue from a cover crop may trigger a carbon penalty," Ferrie adds. "With that additional food source, microbe populations can increase, creating a temporary shortage of nitrogen for young corn plants. The solution is to apply some nitrogen as starter fertilizer when you plant. Equip your planter to handle the increased residue while still closing the furrow and providing good seed/soil contact."

Looking for results. As with any other new practice, you’ll be eager to deter­mine whether cover crops are having an impact. "Your soil physical provides a benchmark so you can follow up later and see whether soil health is improving," Ferrie says.

Another way to evaluate cover crop effects is to plant replicated plots, Towery says. "Splitting a field is better than nothing," he says. "But it’s difficult to get an accurate evaluation without replicated strips.

"Don’t expect to see huge benefits the first year," Towery says. "But take a look because they might be there. You should see some definite results in three years. A lot depends on the status of the soil you’re starting with. Expect fastest results in abused soil or lighter, low-organic-matter soils."

Back to the Future with Cover Crops

"In grandpa’s time, most farmers had livestock, which brought diversity to their farm operations," Ferrie says. "Manure stimulates biological activity in the soil. Grandpa rotated pasture and hay through his operation. He moldboard plowed, which is not good for soil physical health, but he only did it every two to 10 years, with legume and grass crops in between."

Today, market demand forces farmers into short rotations, often just two or three crops.
"We can’t return to the farming practices of grandpa’s time," Ferrie says. "But we can incorporate some of his sustainable practices into modern rotations by learning to use cover crops and other techniques, such as no-till, strip-till and vertical tillage."

Farm Journal Field Agronomist Ken Ferrie estimates 40% of his farmer clients are starting to investigate cover crops, and 10% are growing them. In areas such as the Chesapeake Bay Watershed, where farmers are tackling water-quality issues, the percentage of users is far higher.

Cost-share incentive programs are one of the reasons for the surge in cover cropping. But, beyond that, "farmers want to be good stewards of their soil," Ferrie says. "Recent crop prices have allowed them to invest some money to improve soil health."

The Natural Resource Conservation Service’s emphasis on improving soil health—moving beyond mere erosion control—has resonated with growers, adds Dan Towery of Ag Conservation Solutions in West Lafayette, Ind. "Continuous no-till farmers understand the concept of increasing organic matter and putting more nitrogen in the soil profile. They see the benefits of cover crops and are willing to take on the increased manage­ment challenge," he says.

Building on the Systems Approach, the Soil Health series will detail the chemical, physical and biological components of soil and how to give your crop a fighting chance.