Cow-Calf Producers Should be Cautious of Twin Births 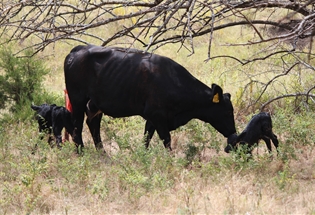 Twins for beef producers can be seen as a blessing and a curse.
By: Donald Stotts, Oklahoma State University

Oklahoma State University recommends cow-calf producers write down calf numbers of twin births while the animals are still nursing the cow, and to never retain a heifer as a replacement female is she is born as a twin to a bull.

Freemartinism is recognized as one of the most severe forms of sexual abnormality among cattle. This condition causes infertility in female cattle born as a twin to a male.

"When a heifer twin shares the uterus with a bull fetus, they also share the placental membranes connecting the fetuses with the dam," said Glenn Selk, OSU Cooperative Extension emeritus animal scientist. "A joining of the placental membranes occurs at about day 40 of pregnancy, and the fluids of the two fetuses are mixed thereafter."

This causes exchange of blood and antigens carrying characteristics that are unique to each heifers and bulls. When these antigens mix, they affect each other in a way that causes each to develop with some characteristics of the other gender.

"Although the male twin in this case is rarely affected by reduced fertility, the female twin is completely infertile in about 90 percent of cases," Selk said. "A transfer of hormones or cells can cause the heifer's reproductive tract to be severely underdeveloped and sometimes even contain some elements of a bull's reproductive tract."

"The external vulvar region can range from a very normal looking female to a female that appears to be male," Selk said. "Usually, the vulva is normal. However, in some animals an enlarged clitoris and large tufts of vulvar hair exist."

Although freemartinism cannot be prevented, it can be diagnosed in a number of ways, ranging from a straightforward examination of the placental membranes to chromosomal evaluation.

"The cow-calf producer can predict the reproductive value of this heifer calf at birth and save the feed and development costs if he or she is aware of the high probability of freemartinism," Selk said.

Estimates of the percentage of beef cattle births that produce twins vary. One study, led by Lester Gilmore, puts the percentage at about 0.5 percent or essentially one in every 200 births. Approximately half of the sets of twins will contain both a bull and a heifer calf. In some cases, there may be few if any symptoms of freemartinism because the male twin may have been aborted at an earlier stage of gestation.

"Hidden freemartins are often difficult to identify if replacement heifers are purchased," Selk said. "This is another good reason to cull any non-pregnant replacement heifer soon after her first breeding season."

Selk said producers – in some cases – may want to consider early weaning of the twin calves to allow the cow to recycle in time to remain ready for rebreeding with the other cows in the herd.