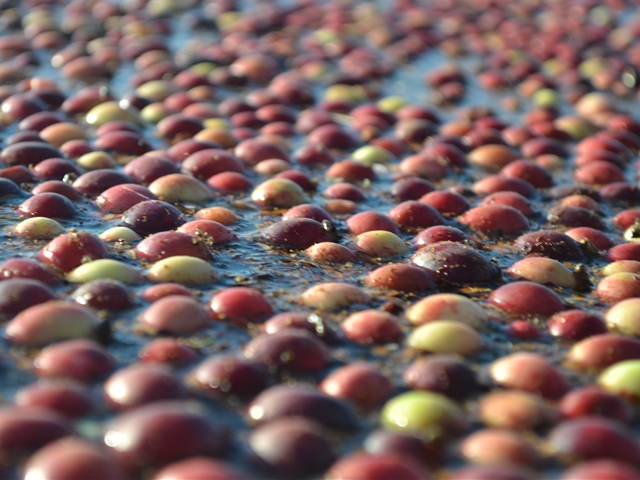 At midnight, Dick Ward drives to the pump house. There, at the edge of his cranberry bog, he pushes the pump speed to 800 rpm and sets in motion the final leg of his 50-year run.

Ward likes to be in charge. You could say he’s built for it. At 74, he stands 6-foot-4 with a lean, athletic frame and a squint that’s all business. The Boston Red Sox cap set over white hair makes you imagine him swinging the stick at some old- timers’ game. He’s been a coach, classroom teacher and gym teacher with a reputation for enforcing the rules. He is chairman of the selectmen who govern his southeastern Massachusetts town of Carver.

At heart, the man is a farmer. Something deep inside clicked when he was 10. He loved taking care of animals and grew fond of people who did the same. Yet cranberries are what came to define his working life. He knows the varieties through and through, the Early Blacks that his wife, Judy, favors, the Howes and the larger Stevens.

His craft was practically invented in Carver. Cultivation began down the road on Cape Cod before the Civil War. By 1900, one in five cranberries produced in the U.S. was a Carver berry. The clean Carver sand and water left by the glaciers made for a bounty at harvest, which stretches from mid-September to a week or so before Thanksgiving, making the berry America’s holiday fruit.

Ward first worked in cranberries in 1964. By the 1990s, he was getting $70 for a 100-pound barrel, and life was good. He bought new equipment and helped cover the college tuitions of his five children.

Now there is a glut. Ninety percent of expected global demand was in freezers before this season’s first berry was scooped, according to Brian Wick, executive director of the Cape Cod Cranberry Growers’ Association, which counts Ward as a member. Blame the new high-yield hybrids and players late to the game such as Quebec, which is expected to surpass Massachusetts in production this year for the first time, with more than 2 million barrels, Wick said.

Instead of $70 a barrel, Ward’s price has dropped to $7, a pinch he says all independent growers are feeling. Each pound costs Ward 23 cents to grow. He sells them for seven, which means he loses 16 cents on every pound. By contrast, friends lucky enough to be in the Lakeville-based Ocean Spray cooperative got a price based on sharing the profits of cranberry and non-cranberry products, or about $45 a barrel.

Ward has dipped into his retirement, skimped on the herbicide. Still, he was in the red, forced to live on savings and retirement benefits.

Enough! he decided in consultation with Judy. After this year’s harvest, he’d turn the eight-bog, 14-acre operation over to his oldest, Steve, who already manages 90 acres.

“Steve’s younger and we’re older,” the plain-spoken Ward said. “Our energy levels aren’t as high, so doing things we’ve done for years is more difficult.” His son is also more optimistic about the price bouncing back, he said.

Implicit in Ward’s decision was the weightier matter of how one prepares for the end of things. What if he or Judy one day needed long-term care? The 14 acres of bogs and another 36 acres of mostly buildable land might be taken to bankroll a lengthy nursing-home stay. To preserve his legacy, he’ll deed the 50 acres to Steve and two other children, and Steve will run the bogs.

He’ll pay the property taxes and help with some of the operation.

“You never stop being a parent,” Ward said. But gone will be those cold, dark trips to the pump house.

Pump speed is critical. Greater speed means more water pouring from Ward’s man-made canal into the bogs that start off dry. It means the berries, already loosened off their woody vines by a machine called a reeler, will float high enough over the plants to be easily corralled.

“You don’t get the water right, nothing’s right,” he said.

After his midnight run, Ward is up again at 4 a.m. for another water check and out of bed for good just before 6. He leaves for his morning coffee and the neighboring town of Wareham, where he retrieves a 65-foot-long trailer truck.

To offset losses in the bogs, Ward drives for Sure Cran, a company that provides services to operations too small to have the personnel or equipment for harvesting. Ward has, in turn, hired Sure Cran, which means he will be hauling his own berries today, earning $18 an hour.

By 8 a.m. he’s back to greet a Sure Cran crew of six young men who will harvest. He and another driver will haul.

Sitting in his idling truck, he talks of his early love for farming. Growing up in nearby Pembroke, he raised sheep in the local 4-H club. He was a good athlete, too. In his senior year at the University of Massachusetts, he won a national hammer- throw championship.

He met Judy in high school. They were married after his sophomore year at college and lived together for the remainder of his time there. She worked in the campus cafeteria to help cover his tuition.

From then on, it was a true partnership. Judy kept the books, weeded the bogs and bought the coffee and doughnuts for the pickers.

Ward is most grateful that his life’s work kept him outdoors. A long driveway leads to the log-cabin house he built in 1974. Beyond that are the low-lying bogs surrounded by the browns and yellows of the October woods.

The sights nature has dished up have never disappointed, he says: a red-tailed hawk soaring out of sight, a praying mantis crawling across the palm of his hand.

As he talks, the first bog, an acre, empties quickly. The crew lets out yards of boom, a plastic-covered foam collar like the containment for oil spills. The boom is pulled tighter, the berries pushed by the men in neoprene waders toward a pump anchored underwater. The pump sucks in the berry-water mix and sends it through a green tube and 20 feet up into a rig anchored on land. The berries are cleaned and spit into the flatbed truck.

One truck is filled, then Ward’s is piled high and he pushes his 65-foot rig through the winding roads to Decas Cranberry Products Inc. in Carver, which buys his berries for juice and other products. He toots the bass horn for police directing traffic and others he knows, and Ward knows just about everybody.

Returning home, he finds the men at work on the last bog, an acre and a half of the Stevens hybrid.

Total barrels taken that morning from the four bogs would come to a disappointing 700. Some years, the same land yielded 1,200.

Noon approaches. Ward stands with Judy and their tiny Jack Russell Terrier, Moto, as the crew finishes. Later, Ward says he has great confidence in his oldest boy, but he knows the transition won’t be simple. Giving up control, confronting one’s mortality -- these are not topics to be settled in a day.

“It’s going to take some time,” he says.

For now, the pump roars to a halt. The last of the bobbing berries is gone. Ward stands looking over his bogs and beyond with the hope that a hawk will rise.