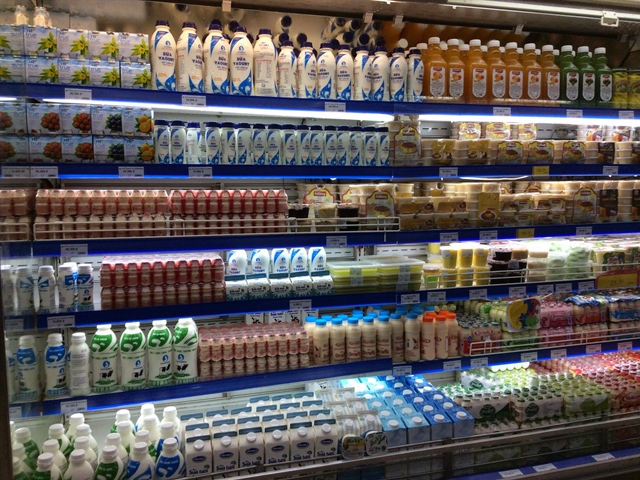 The biggest drop in dairy prices in almost a year helped drag down global food costs for a ninth month, the longest stretch of declines since 1999.

An index of 73 food prices fell 1 percent in July to 164.6, the lowest since September 2009, the United Nations’ Food & Agriculture Organization said in a report Thursday. Dairy product costs slumped 7.2 percent, the most since August 2014, to a six-year low.

The European Union ended milk production limits on April 1, leaving farmers free to boost output, and supply has also expanded in New Zealand and the U.S. as China reduced imports. Prices for whole milk powder have fallen to the lowest in at least seven years, according to GlobalDairyTrade data. A drop in dairy and vegetable oils more than offset increases in sugar and cereals prices, the FAO said.

“If it wasn’t for the grains it would have come down much sharper,” Abdolreza Abbassian, senior economist at the FAO, said by phone from Rome. “It looks like we’ll head down again next month, there is really not much scope for any commodity to rise next month.”

EU milk production is ahead of last year and some dairy manufacturers in New Zealand cut prices to clear out inventories before the end of the financial year, the FAO said.

The organization’s index of global foods, which includes prices for grain, meat, dairy, edible oils and sugar, slumped 19 percent from a year earlier.

“It’s a very long slide, and the extent of the slide is also surprising,” Abbassian said. The drop is reminiscent of the decline in food prices after the oil crisis in the 1970s, he said.

A measure of vegetable oils fell 5.5 percent to the lowest since July 2009, with palm oil declining because of more output from Southeast Asia and soybean oil slipping due to better available supply from South America, the report showed.