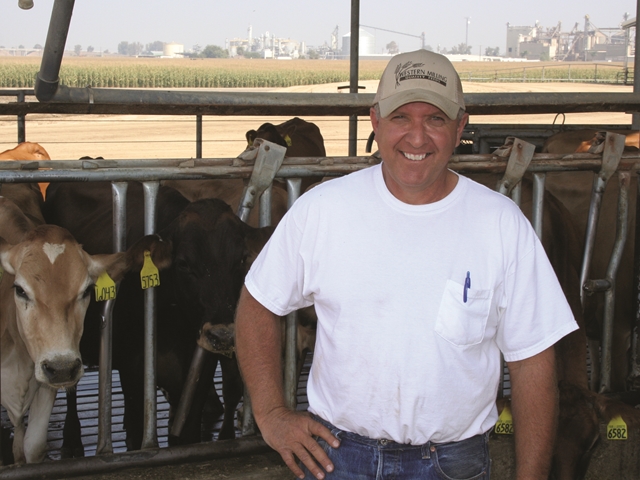 Six years in the making, California’s first biogas project connecting a dairy to an ethanol plant is nearing the end of its first year of operations in the San Joaquin Valley.

The $9.5 million renewable energy project relies on manure piped from a dairy to an anaerobic digester a mile away at the Calgren Renewable Fuels ethanol production facility in Pixley, Calif.

Calgren’s digester captures manure-generated methane gas and burns it as clean biogas to power the ethanol plant. In turn, the plant yields nearly 60 million gallons of ethanol a year that, blended with gasoline, creates a low-carbon fuel for many of California’s 27 million cars.

Officials says the Pixley biogas project is the first California digester to use agricultural waste to create renewable natural gas to power another renewable energy facility. It’s also the first digester in the Golden State to be 100% American-made and constructed. And its now the state’s lowest-carbon commercial ethanol producer.

“This project is a model for biorefineries in California and throughout the U.S.,” says Jim Mckinney, program manager for the California Energy Commission. The state agency contributed $4.6 million in grant funds to the project.

The project produces several benefits, according to officials.

“We turn waste into fuel,” says Lyle Schyler, president of Calgren Renewable Fuels. Ethanol comprises 10% of fuel at California’s gasoline pumps. Moreover, the project’s carbon output “is quite low” because of the digester and other emission-controlling equipment at the plant. “This project is exceptionally green,” Schlyer says.

“Electricity and hydrogen are getting a lot of media attention these days as the fuels of the future,” Mckinney says. “But it is the workhorse plants like this Calgren facility that reduce the carbon content of our fuel supply. At 58 million gallons per year, that’s enough low-carbon fuel for 145,000 cars every year.”
The new biogas system will reduce the amount of natural gas used to fire Calgren’s boilers by 6% and reduce the carbon footprint of the plant’s fuel product by 67 grams of carbon per megajoule, Mckinney adds. “That’s one-third less carbon than gasoline and one-third less carbon than most of the corn ethanol we import from the Midwest,” he says.

The project’s benefits don’t stop with Calgren and the California environment. Frank Junio and his family also have profited from the project—their Four-J Dairy is  supplying the manure to Calgren’s plant. For their role in providing the manure, the Junios got a new manure management infrastructure for their 1,800-cow dairy operation.

The new infrastructure includes a new, double-lined lagoon. The dairy also gets the dried manure solids that are discharged at the back end of the digester cycle. Those manure solids are trucked daily to Four-J Dairy, where they’re used as bedding for the Junios’ cowherd.

The digester’s remaining effluent is piped back to the dairy each day to be applied to field crops.

While 90% of the waste going into the digester comes from the dairy right now, the digester has received permits to use all kinds of feed stocks, including municipal and food processing waste.
Located 12 miles south of Tulare and adjacent to Freeway 99, the Calgren facility was built in 2008. It’s one of only four commercial ethanol production plants in California.

Corn feed stock for Calgren’s plant arrives by train from the Midwest at the neighboring JD Heiskell facility. It’s then transferred via elevators and conveyers to Calgren’s plant for processing. In addition to ethanol, the Calgren plant produces wet distillers grains and corn oil.