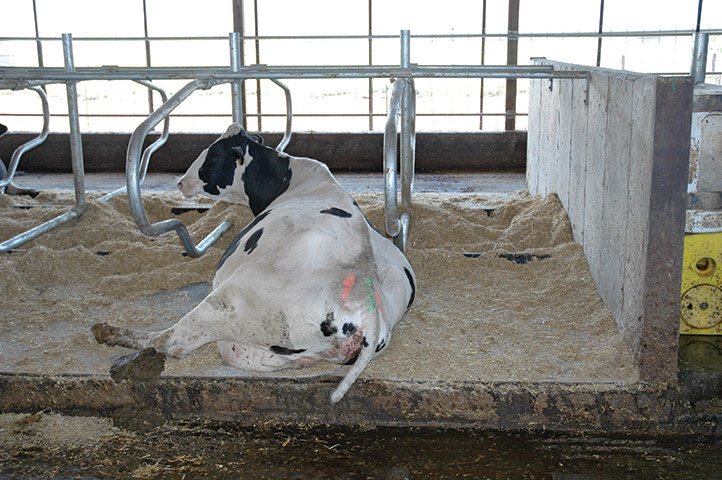 These protocols can help

The problem is that cows can go down anywhere—in tie stalls, in freestalls, in milking parlors, in exit lanes, in foot baths, in loading chutes.

At some point, you have to deal with this reality. The critical issue is how you deal with it. What is acceptable, humane handling and what is out of bounds?

Mike Costin, a professional services veterinarian with Animart, has done a fairly exhaustive review of existing veterinary literature on the handling of down cattle. He found little guidance outside of generalities.

So he, along with Kurt Vogel, a dairy scientist at the University of Wisconsin-River Falls, set out to establish specific protocols for dealing with down cows. (Vogel received his Ph.D. under Temple Grandin, the renowned animal-welfare specialist.)

First and foremost, these protocols will serve only as templates. Farms must develop their own protocols specific to their dairies because no two facilities are alike, Costin says.

"These should be long-term, trustworthy employees who have at least a year of employment at your farm," Costin says. The team should include at least one shift supervisor or manager who is calm and has decision- making authority.

"Moving a down cow is not a spectator sport. Only members of the down cow team need to be present," Costin says. Having others present adds to safety concerns for both the animal and employees, and increases the risk of having someone videotape the proceedings.

Team members should be trained in proper animal-handling techniques. Hip hoists, for example, can be used to help an animal stand. But they should not be used to move animals. For that, use a sling that supports the animal both front and rear.

If a sling isn’t practical, animals should be rolled onto sleds and moved slowly to a recovery area. Rolling animals into front-loader buckets is acceptable, as long as the buckets are large enough to accommodate the animal. Some producers have dedicated buckets, equipped with rubber mats, which are used only for transport of down cattle.

The last resort, if an animal can’t be humanely moved, is euthanasia. But protocols should clearly spell out who has the authority to make the euthanasia decision, who should do it and how it should be done. Even after euthanasia, the animal should be treated with respect. "It does make a difference," Costin says.

Costin and Vogel have developed a nine-point protocol for moving down cattle in various situations. See sidebars for how to use a hip hoist and a sled for transport of down cows. Other suggestions, such as moving cows out of a milking parlor, freestall or traffic lanes, can be found by clicking on the bonus content to this article online.

Standard operating procedure:  1. Proper Use of a Hip Hoist

1. Use of a hip hoist will be decided by the shift manager in charge of the down cow team.

2. A halter will be placed on the cow’s head so that she can be controlled.

3. The hip hoist will be placed over the hip/pin bones of the down cow.

4. The hip hoist will be tightened to a point that when pressure is applied the cow will not slip free.

5. A skid loader will be positioned as close as possible to the rear of the cow with the bucket elevated to maximum height to avoid injuring the cow or an employee, and so that the bucket is directly over the hip hoist.

6. The bucket will be lowered to a point that allows the hip hoist to be attached and leave a gap of 2' to 3' between the bucket and the back of the cow.

7. The skid loader will raise the bucket to a point where the cow can stand straight-legged and no higher.

9. If the cow does not place her feet and begin to bear any of her own weight, she may hang in this position for no more than 5 minutes before she must be lowered back to the ground.

Standard operating procedure:  2. How to Move a Recumbent Cow Using a Sled

1. A sled will be placed on her backside (opposite her feet) as close to her body as possible. (Whenever possible, the sled should be positioned so the cow will be moved headfirst).

2. The cow will be adequately restrained to prevent injury to itself or employees. A halter will be placed on her head, allowing her head to be tied to her back leg. Her two front feet should be tied together and her two back feet should be tied together. This is to prevent her from kicking out and injuring an employee. If necessary, and safe for the cow, chemical sedation or restraint can be administered. A protocol for this should be established with your herd veterinarian.

3. Once properly restrained, the cow should be rolled on her side onto the sled.

4. The cow, while on the sled, will be dragged to the desired location by heavy equipment.

5. The driver of the heavy equipment will drive at a speed that ensures the safety of both the employees and the cow. The equipment should drive no faster than a person can walk. Two members of the down cow team should walk along side of the sled to make sure the cow does not slide off.

6. Once the team has arrived at the desired location, the cow will be rolled back to her belly and off the sled.

7. The restraints on her feet will be removed.

8. The cow’s head will be untied from her back leg and the halter removed.