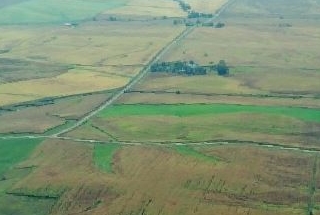 After years of struggling to keep drinking water for almost 500,000 residents in Des Moines and its surrounding areas clear of contaminants largely from upstream farms, the Des Moines Water Works board says it plans to sue three counties.

Water Works' lawsuit would aim to hold Calhoun, Buena Vista and Sac counties responsible for the high nitrate levels in the Raccoon River, a primary water source for Des Moines. Before the suit can be filed, the Water Works board must approve doing so in a vote, which is planned for Thursday.

It could be one of the first lawsuits in the U.S. filed by a water utility holding local officials responsible for pollution from farm drainage systems.

"They're transporting groundwater that is heavily polluted because of the agricultural activities," Water Works CEO Bill Stowe said. "They're a point-source polluter like a factory or a city stormwater system or a wastewater plant. The state has chosen to turn its head from regulating them and we're obviously at a point where we no longer consider that to be a tenable outcome."

The Sac County Board of Supervisors who were meeting about the issue Wednesday had no immediate comment, a woman in the county auditor's office said. That board oversees seven drainage districts in coordination with Buena Vista and Calhoun.

Drainage districts were established to help move water out of farm fields so they can be more agriculturally productive. Northern Iowa has the most extensively drained farmland in the country — an estimated 9 million acres.

The three counties that would be targeted under the lawsuit have about 1.2 million hogs, more than a million turkeys and 96,000 cows, according to the most recent U.S. Department of Agriculture statistics. Manure and fertilizer are rich in nitrogen, which helps produce high corn yields. But when left unused in the soil, it can wash into rivers and streams as nitrates.

Iowa began a voluntary program in May 2013 that encourages farmers to reduce runoff, but Stowe and environmental groups argue that strategy lacks measurable benchmarks or a timeline for improvement.

Republican Gov. Terry Branstad and his administration have refused to consider stronger regulation.

"I believe the voluntary approach we have is the most likely to be effective," Branstad said Wednesday. "I think a lawsuit would be a big mistake. I think it would be much better to work in a collaborative basis to try to identify where the problems are and how they can be addressed."

The struggle to maintain drinkable water leaves Stowe with little choice, he said, adding that equipment that removes nitrates has been running since early December at a cost of thousands of dollars a day — which is passed on to water users.

The EPA has set a safe limit of 10 milligrams per liter for city water systems. The Raccoon River was at 14 mg/l on Wednesday morning and above 12 mg/l on the Des Moines River, which is another source of drinking water for Des Moines. The treated water distributed by Water Works was just under 8 mg/l on Wednesday.

Each drainage district is set up so that each landowner pays an assessment equal to the benefit received, which means farmers in the districts will bear the legal costs, according to John Torbert, the executive director of trade group Iowa Drainage District Association.

"It would be like suing the highway because cars travel the highway and cause pollution," he said.