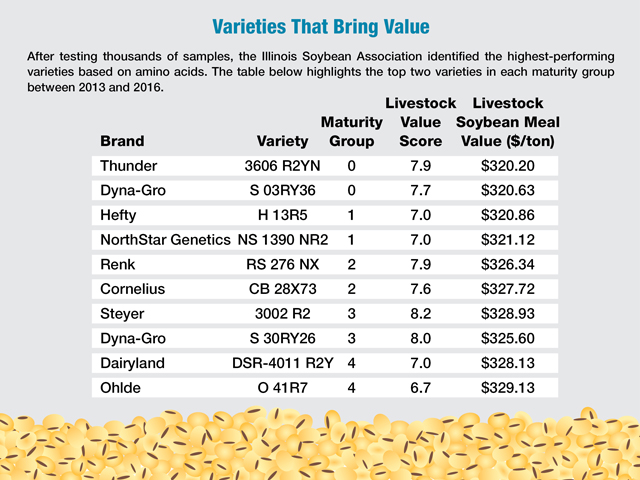 Soybeans used for feed have traditionally been valued for their protein. Some researchers now suggest the value of amino acids in soybeans is worth even more.

“We want to change the approach to focus on end-user value based on amino acids that drive animal productivity,” says John Osthus, Illinois Soybean Association (ISA) High Yield Plus Quality program lead. “Our goal is to encourage seed companies to offer varieties that deliver top performance to livestock customers.”

When animal nutritionists create feed rations, they look to soybeans for amino acids—not protein. With more synthetic amino acids and DDGS available, soybean meal’s share of feed rations is diminishing. However, soybeans high in isoleucine and valine are valuable because there are no cost-effective synthetic alternatives.

Despite this, “overall demand for protein and amino acids is up, so demand for soybean meal continues to be strong despite competition from other sources,” Osthus says. “It’s tricky because feed need is increasing because of a larger number of animals overall, so farmers and processors don’t necessarily feel the pain of decreased soybean meal per animal.”

Still, farmers receive fewer dollars from feed rations, and livestock feeders are missing potential savings—up to $3 per hog and 7¢ per chicken, according to ISA research.

In 2017, farmers submitted more than 1,800 soybean variety samples from across the U.S., and researchers also used information from 2013 to 2016 F.I.R.S.T. trials, which included 710 additional varieties. Any farmer who submitted a sample to the U.S. Soybean Export Council in 2017 can see how their varieties rank in feed value at www.soyvalue.com.