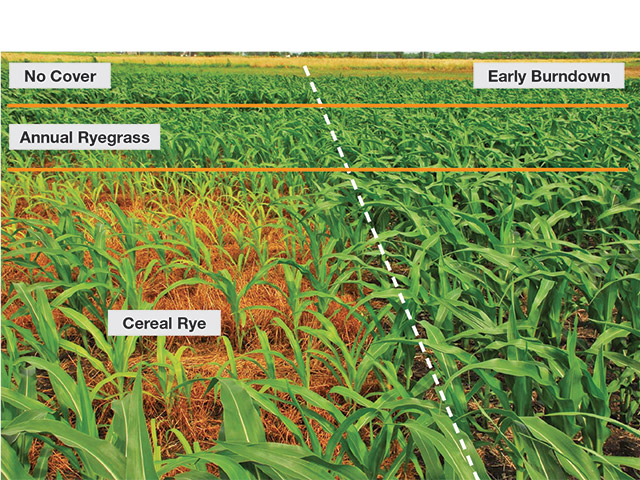 The effects of a late kill of cereal rye on corn plants is evident. The impact appears to result from a combination of the carbon penalty and allelopathy exerted by the cereal rye.
( Darrell Smith )

Manage the carbon penalty, allelopathy and disease to improve soil health and yield

Cover crops are wonderful tools to improve soil health. They increase microbial diversity, improve aggregate stability and enhance water infiltration. They add organic matter, might help control weeds and some of them produce nitrogen for your next corn crop to use.

But cover crops can cast a shadow over the subsequent cash crop—especially corn, but to a lesser extent, soybeans. A new Farm Journal study demonstrates how covers—if they are improperly managed—can reduce corn yield. The study also shows you can avoid or minimize problems—and keep your corn plants thriving—by selecting the right cover crop and adjusting planting and nitrogen management practices.

“Cover crop selection begins with choosing a variety or mixture that will achieve your goal for the soil—biological diversity, aggregate stability or whatever,” says Farm Journal Field Agronomist Ken Ferrie. “Then you narrow your choices to fit your planting window, rotation, herbicide program and geographic location. Finally, look ahead to the following cash crop.”

“With corn, you must manage the cover crop to avoid jeopardizing the fundamentals of yield,” Ferrie says. “Ear count is what matters. To maximize ear count, we must have uniform plant spacing and growth.”

Corn plants set their maximum limit on yield very early in life, which means corn must never have a bad day after it’s up and growing. Early stress affects ear size by reducing girth—the number of rows of kernels around the cob—and ear length. Once yield potential is capped, it won’t bounce back (unlike soybeans, which will recover from early stress).

Some farmers are experiencing this effect. “One grower I know has been getting amazing cover crop stands for several years,” Ferrie says. “But his corn yields have nosedived. He’s had great success growing cover crops, but the financial part is not working out.”

Cover crops can reduce corn yield by acting as weeds in the row and by tying up soil nutrients when they decompose. “If cover crop plants are allowed to grow in the corn row, the corn plants see them as weeds, and it creates stress,” Ferrie says. “Stress lowers yield potential. The longer weeds and corn plants grow together in the row, the greater the reduction in ear size. Even if you take out the weeds, or the cover crop, a few weeks later, the damage has been done. Yield potential has been lost, and you will never get it back.”

Another source of stress on young corn plants is the carbon penalty. When cover crops are killed, the influx of carbon in the residue leads to a higher population of soil microorganisms. They temporarily tie up soil nitrogen and other nutrients, leaving corn plants to go hungry in the critical early weeks. If a cover crop has a high carbon/nitrogen ratio, the longer it’s allowed to grow in the spring, the more residue and the higher the carbon penalty.

Some cover crops release allelopathic toxins that can help control weeds. In some situations, those toxins might negatively affect the cash crop.

The Farm Journal study documented the impact of in-row competition, the carbon penalty and allelopathic toxins on corn ear length and girth. The corn followed annual ryegrass and cereal rye with no-till planting into old-crop residue as a check. Ferrie killed the covers at three different heights.

“Letting annual ryegrass grow as tall as 9" had only a small effect on the girth of the ear,” Ferrie says. “But cereal rye reduced ear girth even at 3" and had a much greater impact if it was allowed to grow taller. Ear length began to suffer when annual ryegrass was allowed to grow taller than 3", and it was reduced significantly by cereal rye at all three growth stages.”

The differences, Ferrie believes, resulted from the carbon penalty, which increased as cover crops grew taller. With cereal rye, the allelopathic effect also appeared to be a problem. “With cereal rye, the impact showed up earlier and the loss was greater because there were two mechanisms, rather than just one, working against the corn,” he says.

“Putting nitrogen next to the plants with the planter made a big difference,” Ferrie says. “When the second nitrogen treatment was paired with later cover crop kill dates, some plants produced no ears at all. Even applying nitrogen with the planter, there was still a carbon penalty from the cover crop residue, but it was much smaller.

“This is the same kind of adjustment you have to make to your nitrogen program when dealing with a large volume of cash crop residue,” he adds.

A third aspect of the study looked at the value of row cleaners to kick cover crop residue aside. “We found using a good aggressive row cleaner added 800 to 1,000 ears per acre when corn followed cereal rye,” Ferrie says.

While timing and placement of nitrogen overrode some of the carbon penalty, the row cleaners also helped the carbon penalty and the allelopathic effect of the cereal rye. Strip-till will also help eliminate competition in the row if you’re planting into a growing cover crop, Ferrie adds.

Unlike corn, soybeans can encounter problems early but still bounce back without losing yield by producing more branches and nodes. “Killing the cover crop later slowed the soybeans’ early growth, probably because of lower soil temperatures under the cover crop residue,” Ferrie says. “By late July or early August, when soybeans make their yield, we saw no visual difference. Soybeans are not bothered by the allelopathic effect of cereal rye, nor the carbon penalty because they make their own nitrogen.”

Think about disease issues when planting a cover crop ahead of soybeans. “Make sure the cover crop you select doesn’t increase disease pressure,” Ferrie says. “Legumes could create a bridge for disease into the soybean crop. If a field has nematode problems, don’t choose a cover crop that serves as a host to the nematodes. We observed a measurable increase in soybean cyst nematode populations when the cover was a host crop.”

There’s also a disease concern with corn. Research from Purdue University indicates annual ryegrass (but not cereal rye) can be a host for Goss’s wilt. “If you planted annual ryegrass this fall, scout it for Goss’s wilt next spring,” Ferrie says. “If you find Goss’s wilt and plan to plant corn, choose hybrids with strong Goss’s wilt resistance. If you have the disease in your area, you’ll need to think about this with every cover crop.”

In northern areas with a shorter post-harvest planting window, you might be forced to grow cereal rye ahead of corn because it can be planted later. “In that situation, plan to kill the cereal rye early in the spring to minimize the allelopathic effect,” Ferrie advises.

“With either annual ryegrass or cereal rye, use strip-till or aggressive row cleaners to clear residue from the row and avoid inter-row competition. Band nitrogen with your planter to eliminate or minimize the carbon penalty,” Ferrie advises. “Remember, your goal is to never let those corn plants slow down.”

Building on the Systems Approach, the Soil Health
series will detail the chemical, physical and biological components of soil and how to give your crop a fighting chance.
www.FarmJournal.com/soil_health

Ears from a Farm Journal study show the results of delayed killing of annual ryegrass and cereal rye cover crops in comparison to a check where corn was no-tilled into old cash crop residue. Letting annual ryegrass grow as tall as 9" had only a small effect on the girth (kernels around the ear). However, cereal rye reduced girth even at 3" and had a much greater impact if it was allowed to grow taller.

Ear length (kernels) began to suffer when annual ryegrass was allowed to grow taller than 3", and it was also reduced significantly by cereal rye at all three growth stages.