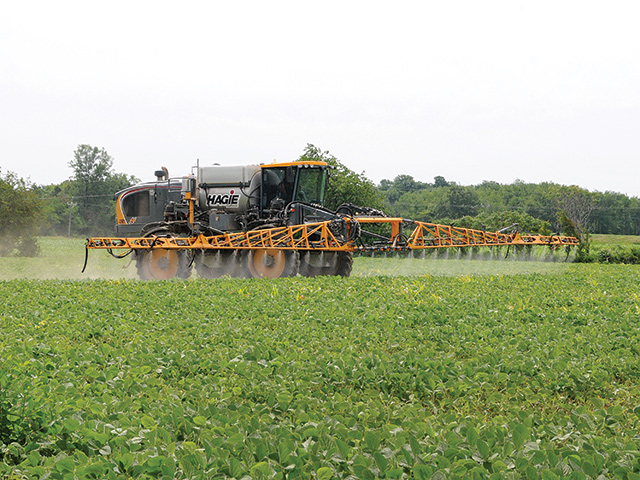 To maximize your chances for a successful cover crop, use row-crop herbicides, including late-season rescue treatments, with short residual time in the soil. Consider the impact of soil type and weather on herbicide degradation as well.
( Lindsey Benne )

Timely tips to help you succeed with cover crops

When he’s not planting or harvesting corn and soybean trials, you’ll often find Farm Journal Field Agronomist Ken Ferrie gazing at cover crop studies and asking why. Why did one cover crop establish here but not there? Why did it winterkill following corn but not when it followed soybeans? Why did the same cover successfully establish this past year but not this year?

At least once, Ferrie’s cover crop gazing has led to an Aha! moment. “I noticed a cover crop did better following soybeans than corn,” he says. “It wasn’t the kind of damage you’d notice unless you planted two plots side by side, as we did. But it made me realize for the first time the atrazine we had applied on the corn was affecting the cover crop. That suggests we need to think ahead about herbicides if we want to maximize the health of our cover crop.”

The effect of residual row-crop herbicides still present in the soil might answer many of Ferrie’s questions about cover crop performance. Although his observations are anecdotal, rather than scientifically documented, they might help increase your success with cover crops.

Ferrie’s thoughts might be especially important this fall because of unusual weather conditions in many areas. “Wet spring weather led to late planting, late spraying, weed escapes and late applications of rescue herbicides,” he says. “All those factors increase the chance of herbicide remaining in your soil when you plant your cover crop.”

Here are several factors to think about before you plant cover crops:

2. Accurate application starts at the sprayer tank. “Measure products carefully and mix them correctly,” Ferrie says. “If possible, use auto-steer and auto-swathing technology on your sprayer to prevent overlap.”

3. Know how long the herbicide remains active in the soil and understand the effect of each row-crop herbicide on the cover you intend to plant.

4. Consider the impact of the soil environment and the weather following a herbicide application.

“If you were successful with cover crops while following a glyphosate-based herbicide program but are starting to encounter problems, the reason could be the change to more residual herbicides,” Ferrie says. “Growing cover crops was easier when glyphosate was a big part of herbicide programs. Now, because of resistant weeds, many farmers are going back to soil-applied residual herbicides.”

There are also more wide-row soybeans now, Ferrie adds. In years such as 2015, those fields were slow to close their rows, leading to more residual herbicide rescue-type applications, often applied fairly late in the growing season.

If you plan to follow a cash crop with a cover crop, spend some time researching your row-crop herbicides. Understand how long each herbicide persists in the soil, which is affected by their half-life. Common weed killers can last a few days to four months.

After reading “Herbicide Persistence and Rotation to Cover Crops,” a publication highlighting research by Penn State University Extension weed scientists Bill Curran and Dwight Lingenfelter, Ferrie realized why his plots were having trouble with some cover crop mixtures. (To access the publication complied by Cover Crop Solutions, visit http://bit.ly/covercrops15.)

Drawing from the Penn State research, here’s an example of what you need to consider: Corvus herbicide has a half-life in the soil of 50 to 120 days. You’ll probably be OK if you plant a cover crop of wheat, triticale or rye, but you might have problems if you plant small-seeded legumes, mustards or sorghums. You’ll have your best chance of success with sensitive crops if you receive 15" to 30" of rainfall after Corvus application.

“If you are applying a tank mix, be sure to look at the half-life, cropping restrictions and other concerns for both herbicides,” Ferrie says.

The publication also discusses how herbicides vary in their effect on cover crop species because of their different modes of action (listed as a Group Number on a herbicide label). “For example,” Ferrie says, “many cover crops, such as rye, oats and radishes, are sensitive to Group 5 herbicides, which are photosynthesis inhibitors. If you plan to plant one of those cover crops, you might want to choose a different herbicide for your cash crop.”

Because cover crop species vary in their sensitivity to herbicides, you might be able to avoid or minimize damage by choosing a different cover. In a greenhouse study, Iowa State University Extension weed scientist Bob Hartzler and Extension field agronomist Meaghan Anderson examined the impact of several row-crop herbicides on popular cover crops, ranking the risk of injury from 1 (least risk) to 3 (most risk). For example, Hornet is rated 1 for cereal rye and oats but 3 for hairy vetch, lentils and radish. (Visit www.weeds.iastate.edu/mgmt/2015/CCherbicides.pdf for the full report.)

In addition to planning and knowing how row-crop herbicides can impact your cover crop, soil type and weather conditions also affect the longevity of residual herbicides. “Heavy soils with high organic matter content cause herbicides to degrade faster, reducing the risk to a cover crop,” Ferrie says. “Ironically, lighter soils, where we are trying to build organic matter with cover crops, carry the greatest risk of herbicide residual.”

“Although we had moisture in the fall, an early season drought prevented soil-applied herbicides from degrading in the soil,” he says. “In one field, we flew on cover crop seed, but none of it caught. When we planted the cover crop, the field was still free of weeds; that should have tipped us off that the residual herbicide was still working and we should save the money we invested in cover crop seed.”

Warm temperatures are helpful, too, because herbicides break down faster in warm soil, Ferrie notes. As a rule of thumb, every 10° of soil temperature doubles microbial activity.

Choosing short- or medium-residual herbicides for your row crops becomes even more important in northern areas. There, cooler temperatures allow less time for herbicide breakdown, as well as a shorter window for planting cover crops. “Wherever you farm, using row-crop herbicides with the shortest possible residual will help lengthen your cover crop planting window,” Ferrie explains.

There are two ways to test for herbicide residual before you plant this fall’s cover crop. “For many herbicides, you can have soil analyzed in a lab to determine the amount of active ingredient remaining,” Ferrie says. “These tests can be fairly expensive.”

You also can conduct your own bioassay, or growout, test. “Collect surface soil two or three weeks before cover crop planting,” Ferrie says. “Put the soil in pots and plant cover crop species. Include a check in your test, using soil from a fencerow or someplace where no herbicides were applied. Watch the young plants to see if a herbicide is stunting growth and which species in a mixture are stunted the worst.”

Oats is a good choice for a growout test, acting like a canary in a coal mine at detecting herbicide residue. “If you are considering a mixture of oats and cereal rye, your growout test might persuade you to plant straight rye instead,” Ferrie says.

Do whatever you can to help your cover crop establish and fight the lingering effect of herbicides in the soil. Drilling might give seed an edge, compared with flying it onto the surface. Plant your cover as early as you can, based on the longevity of your herbicide, soil conditions and weather. “Planting early increases the chances of successful establishment and reduces the risk of winterkill,” Ferrie says.

Even if there is some degree of risk, planting a cover crop might be worthwhile in the end.

“You might still reap some soil health benefits even if the stand isn’t perfect,” Ferrie says. “Just understand the risk factors, including herbicide residual, and do everything you can to minimize them. Consult herbicide labels and visit with successful cover crop growers in your area.”

A Herbicide Issue for Livestock Producers

Some might argue a cover crop harvested for forage isn’t a true cover crop, but Farm Journal Field Agronomist Ken Ferrie disagrees. “If a farmer harvests silage that creates an opportunity, as well as a need, for a cover crop,” he says. “The producer might graze the cover crop eventually, or chop it for silage, but while it’s growing, it protects the soil surface and provides soil health benefits.”

“The farmer also realizes some economic benefit, which gives him an incentive to plant the cover crop,” he adds.

Harvesting a cover crop of oats or rye adds another challenge to row-crop herbicide selection. “With a traditional cover crop, you only have to think about how much of the herbicide’s active ingredient remains in the soil and how the mode of action impacts your cover,” Ferrie says. “But many row-crop herbicide labels contain restrictions as to how soon after application you can harvest forage. Often, those restrictions are as long as nine to 18 months. If you fail to follow those label guidelines, you are violating the law.”

Building on the Systems Approach, the Soil Health
series will detail the chemical, physical and biological components of soil and how to give your crop a fighting chance.
www.FarmJournal.com/soil_health