Don’t Leave Yield Behind in the Field 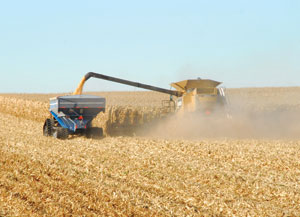 An odd thing happens when a farmer activates a combine system to match groundspeed to optimal grain threshing and separation: The combine generally slows down.

"Combine operators often have a certain groundspeed in mind," says Jeff Gray, senior product specialist, Claas Lexion. "I’ve noticed that once our Cruise Pilot auto-throughput control system settings are optimized, it may not drive the combine at the groundspeed the farmer desires. Farmers tend to think in terms of acres per hour harvested. With high grain prices, it’s more profitable to go a little slower, adjust the combine for minimum grain loss and maximize bushels per acre."

Gray and other combine performance experts say mandating a specific groundspeed can disrupt the critical balance among combine settings that optimize performance. Understanding how the machine responds is key to maximizing yield and minimizing loss.

A domino effect. "A combine is a system," says Kelly Kravig, Case IH product marketing manager. "No single aspect of a combine stands alone. The performance of the concave and rotor is related to how material is cut and fed into the machine by the header. How well the header feeds is tied to groundspeed, which is related to engine revolutions per minute, which influences sieve shake speed. You can’t change one setting without considering how it affects all the other settings."

Kravig starts his analysis of combine performance at the front of the machine.

"My first goal is smooth, even feeding," he says. "Don’t blame concave and rotor settings or your sieve and cleaning fan settings for trash in the tank if the header is set wrong and ‘wad feeding’ the combine."

Wad feeding, slug feeding, bunch feeding—whatever you choose to call it—temporarily overloads the threshing and separating components in combines and produces bursts of trash in the grain tank, along with temporary high grain losses out the rear of the combine. Operators often adjust concaves and rotors, or fans and sieves, to compensate for uneven feeding, when the cure is adjusting the header to feed crop smoothly into the machine.

"One of the best ways to check a combine’s performance is to move the [straw] chopper out of the way and temporarily windrow the material coming out the back of the machine," Gray says. "You want that windrow consistent—no bunches, no thin spots. Every time a dense slug or wad of
material goes through, the potential for grain loss and damage increases. If you’re dropping ‘beaver huts’ in the windrow, a good place to start correcting the problem is at the header."

Even if bunch feeding isn’t a problem, Gray likes to check for grain loss with the straw chopper in windrow position.

"Choppers mask a lot of losses," he says. "They grind and spread any grain coming off the sieves or rotor and spread it so it’s harder to get a grip on how much you’re losing. When you put everything in the windrow, you can use our grain loss tables in the owner’s manual to count kernels or beans per square foot and calculate your actual losses, based on the size of the header."

Kravig says his grain loss goal when setting combines is 1% or less of total yield. Careful adjustments often allow him to trim losses to much less.

"The best way to adjust a combine is to do a kill-stall when you’re in average-yielding crop, traveling at average groundspeed," Kravig says. He recommends reviewing instructions in the owner’s manual on how to kill-stall a particular combine and assures operators that a properly conducted kill-stall will not plug or harm the machine.

"Once everything in the separator has stopped turning [after conducting a kill-stall], restart the engine and allow it to cool down, then shut it off and open the side shields," Kravig says. "That way, you can see what’s happening where inside the combine."

Kravig checks the concave section to see if most of the grain is threshed in the first third of the concave. He checks the upper and lower sieves, and wants little "free grain" on the rear of the upper sieve and minimal grain moving off the lower sieve into the return elevator.

Even though high volumes of air are critical to proper grain separation, operators often worry that excessive cleaning-fan speed will literally blow grain out the back of the combine.

"In low-yielding or light test weight grains, cleaning fans can blow grain out the back," admits Richard Bunton, a recently retired combine marketing representative with John Deere. "In heavier grain, like corn, I’d say it’s difficult to blow grain out the back if you’re running appropriate sieve settings. I want a lot of air moving through the sieves to keep things floating and encourage grain separation, especially when you’re dealing with high-yielding corn or green-stem soybeans."

Check your speed. Bunton notes that the cleaning-fan speed, along with the sieve "shake" speed, is sensitive to engine speed.

"If you lug the engine below 2,000 rpm, you decrease cleaning-fan speed, shake speed of the sieves, rotor speed, chopper speed—the whole harvesting system is affected," Bunton says. "You need to ease up on the hydro handle long before the low engine rpm warning light comes on because the threshing and separating process degrades rapidly as revolutions per minute fall below optimum."

"It depends on how dry the crop is, how much material is moving over the sieve and other variables, but the biggest problem on slopes is with high-yielding, dry corn," Bunton says. "You can see dry corn move to the downhill side of sieves on as little as a 5° slope. Newer combines have self-leveling sieves as an option. On older combines, you can add dividers to keep grain from shifting sideways on the sieves."

Most combines have grain loss monitoring systems to notify operators if grain is going out the back of the combine. The trick is to calibrate those monitors to accurately report grain loss.

The cure for excessive grain losses out the back of a combine is often to adjust the concave, rotor, sieves or cleaning fan. In high-yielding crops, such as corn, or heavy-residue crops, such as green-stem soybeans, Gray suggests adding "reduced groundspeed" to the list of potential changes to minimize grain losses.

"At today’s grain prices, I’d rather slow down slightly and cut my grain losses in half," Gray says. "It’s hard when you have a lot of acres to harvest, but the grain you save is the bonus you pay yourself for being patient."

The next time your combine’s engine lugs down, consider where all that horsepower is going.
Eight-row corn heads can easily gobble more than 60 hp to 80 hp when harvesting high-yielding, high-moisture corn. Twelve- and 16-row corn heads can consume nearly 200 hp. At the rear of the combine, straw choppers set to cut and spread residue from high-yielding corn or green-stem soybeans often demand from 100 hp to 150 hp.

Add the ponies necessary to simply move a combine—with its grain tank stacked with nearly 400 bu. of grain—up a hill or through a wet spot, and sometimes there’s barely enough power left to thresh and separate grain.

The best option to ensure there’s enough horsepower to actually thresh and separate grain is to reduce groundspeed. Pushing less material through the machine reduces the load on the header, chopper and ground drive system, leaving more horsepower available for the critical threshing and separating components of the machine.

Get Dirty to Save Money

Not all combine adjustments to optimize performance can be done via the touch of a button in the cab. All manufacturers offer optional components or out-of-cab adjustments to fine-tune operation in specific crops.

"One of the big misconceptions about modern combines is that one configuration or range of settings is good for all crops," says Jeff Gray, senior product specialist, Claas Lexion. "It may be worth a farmer’s time to change or reconfigure concave grates for different crops. Or maybe it would improve threshing and separation to change the rotor speed range. It’s not hard to make those changes, but you can’t do them from the cab."

"Adding the inserts to the first section of our round-bar concaves makes a huge difference in reducing splits and cleaning up our grain samples," Luther says. "It takes a little time and you’re going to get dirty, but with us combining so many seed beans, it’s definitely worth the effort.
Local equipment dealers are in tune with area crops and can help combine operators decide if changing concaves, adding components such as concave inserts or making other changes will be of benefit.

Next Year's Crop Starts at Harvest

Combine operators often are so focused on combine adjustments related to threshing and separating grain that they overlook the importance of adjusting their combine’s residue chopping and distribution system.

"I tell farmers that next year’s crop starts with how well they cut and distribute the residue from this year’s crop," says Jeff Gray, senior product specialist, Claas Lexion. "They need to make sure the chopper’s knives are sharp, and that it’s set up and adjusted to spread residue evenly across the width of their header’s swath.

"It’s especially important in green-stem soybeans to get that residue cut up as fine as possible and evenly distributed," Gray says. "If you don’t get it cut up enough, it can cause problems with plugging tillage or seeding equipment next spring. If you don’t get it distributed evenly across the full width of the header, it can cause uneven warming of the soil at planting and affect plant emergence next year.

"It’s not exaggerating," Gray says, "to say that the way operators adjust and operate their combines affects two crops—the crop they’re harvesting and the crop they’ll plant the next spring."