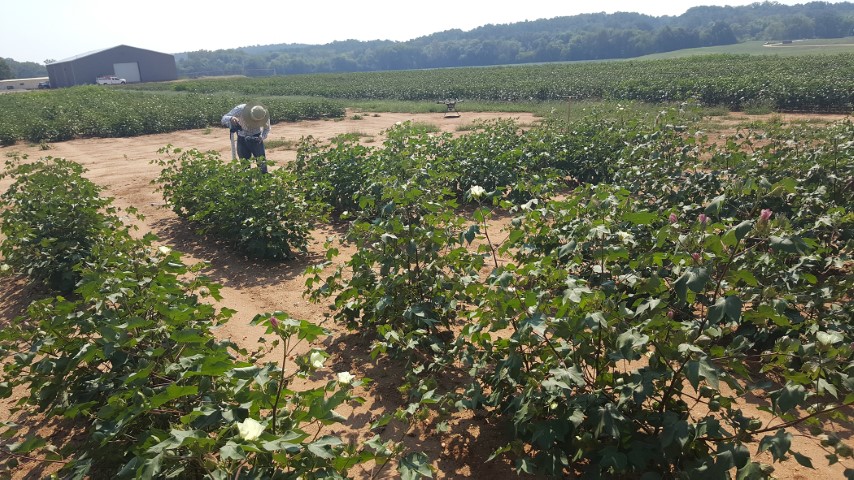 Changying “Charlie” Li, a professor in the UGA College of Engineering, calibrates a prototype all-terrain robot while a drone hovers nearby at the Iron Horse Plant Sciences Farm.
( UGA / Kyle Johnsen )

The robots aren’t coming – they’ve already arrived. At least, that’s the case at the University of Georgia, where a team of researchers use all-terrain rovers on the ground and drones in the air to quickly and accurately gather crop data, including growth patterns, stress tolerance and general health.

Changying “Charlie” Li, a professor in UGA’s College of Engineering, says the information collected is vital to his colleagues, who say they are in a race to increase agricultural production amid rapid world population growth.

“By the middle of this century, scientists estimate the world’s population will reach 9.1 billion people, which is a 30% increase in a little more than 30 years,” Li says. “This increase in population will demand that we nearly double our current food production.

That’s a tall order, but one solution is to use genomic tools to develop high-quality, high-yielding, highly adaptable crops. Using drone and robot helpers, the researchers hope to remove an “expensive and painstakingly slow” bottleneck of scientists manually recording data one plant at a time, according to Andrew Paterson, co-principal investigator.

“The robots offer us not only the means to more efficiently do what we already do, but also the means to gain information that is presently beyond our reach,” he says. “For example, by measuring plant height at weekly intervals instead of just once at the end of the season, we can learn about how different genotypes respond to specific environmental parameters, such as rainfall.”

The robotic assistants will be outfitted with multispectral, hyperspectral and thermal cameras, plus LiDAR sensors. During preliminary testing in 2016, researchers soaked up 20 terabytes of data in six months. Once the system is fully operational, they could collect as much as 30 times that amount of data, according to Li.

Researchers will need help to analyze these massive data sets, so they are developing an artificial intelligence algorithm. Just like Facebook’s facial recognition program identifies your friends and family to “tag” in photographs, this AI feature could help identify distinguishing characteristics in a crop field.

“As an example, our algorithm will be able to scan an aerial photo of a large field and automatically identify the location and number of flowers on each plant,” Li says.

A separate set of algorithms will serve as “traffic control” – ensuring multiple ground and aerial vehicles can operate independently but collaborate, all while staying out of each other’s way.

This project is supported by a $954,000 grant from the National Robotics Initiative, which is jointly sponsored by the National Science Foundation, USDA, NASA, U.S. Department of Energy and the National Institutes of Health.