According to the National Drought Monitor, drought covers 52.57% of the contiguous U.S., which is down slightly from 53.36% last week. Slight expansion was noted to the drought across the Midwest, with expansion in western and southern states also noted. 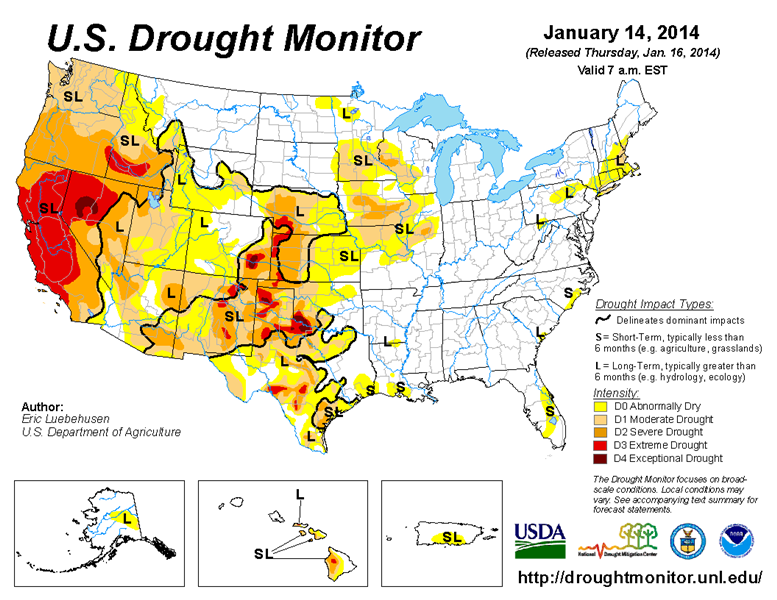 The monitor notes: "An increasingly active weather pattern brought rain, ice and some snow to the eastern half of the nation, with locally heavy rain observed over portions of the Southeast. In contrast, drought persisted or intensified across the West, where increasingly poor water-year precipitation and alarmingly meager mountain snowpacks continued."

For the Midwest, the monitor states 33.79% of the region is covered by drought, a slight increase from 33.1% last week. Drought covers 76.6% of Iowa and 50.16% of Illinois, which is unchanged from last week. The monitor notes that last week's moisture that fell across portions of Missouri and Iowa did little to reduce longer-term deficits. "In particular, precipitation over the past 180 days has totaled locally less than 50% of normal from east-central Missouri into central Illinois, where D1 and D2 persist. Similar precipitation deficiencies are also noted across Iowa and along the Minnesota-Wisconsin border and environs," states the report. "Not only was the precipitation during the period insufficient to reduce drought, but increasingly dry conditions led to an expansion of Abnormal Dryness in south-central Missouri (less than 50 percent of normal precipitation over the past 60 days). Impacts are generally minimal during the winter months, though subsoil moisture reserves remain limited in the worst drought areas." 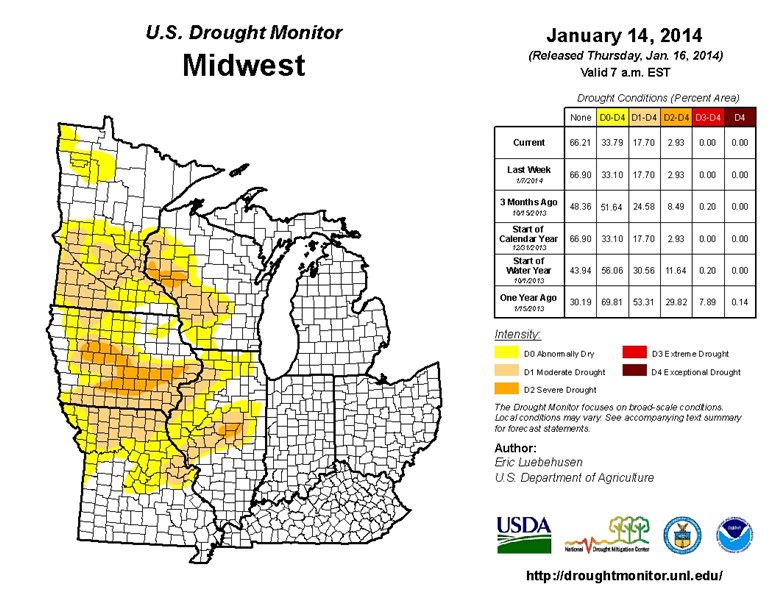 For the Southern Plains, the monitor notes most of the core drought area of the region remained dry. "Short- and long-term drought is prevalent from northern Texas into central Oklahoma, where 90-day precipitation has totaled 50% of normal or less (locally less than 30% of normal). Topsoil and subsoil moisture remained extremely limited across much of north-central Texas and neighboring portions of Oklahoma; soil moisture percentile rankings are in the 5th percentile or lower in the Extreme and Exceptional Drought (D3-D4) areas of the Southern Plains," it states. "The drought continues to take a toll on Texas’ winter wheat, which was rated 38% very poor to poor as of January 12. In southeastern Texas, areas that mostly missed the past week’s 1-inch rainfall were included in the expanded D0 area (Abnormally Dry) to reflect drier-than-normal conditions over the past 60 days (50% to 60% of normal) and increasingly low soil moisture (10th percentile or lower)." 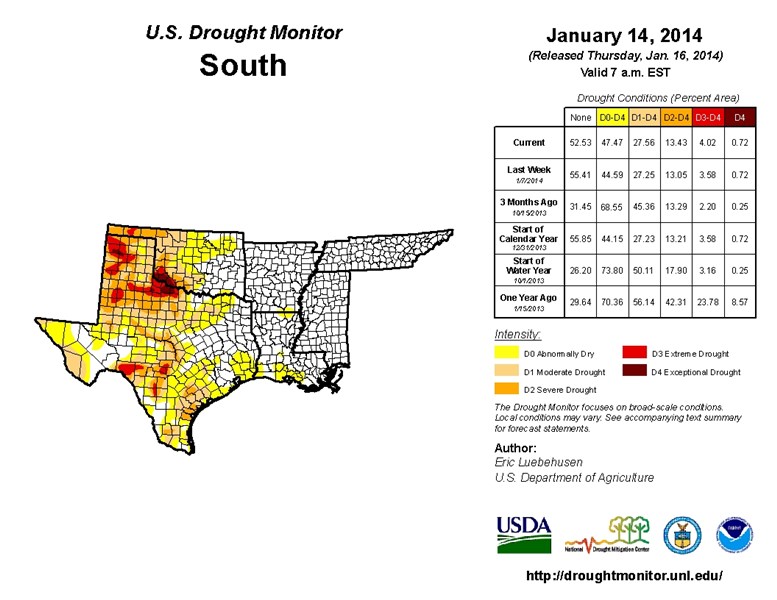 Regarding the large drought area covering the western states, the monitor says that despite the arrival of rain and high-elevation snow in the Northwest, drought persisted or intensified across the region. The most notable drought increases were from central California into the Pacific Northwest. 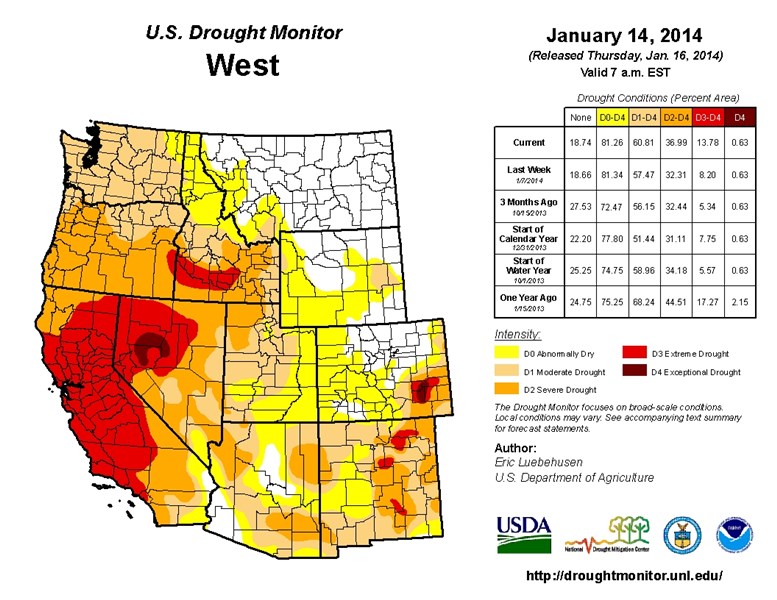 Looking ahead, the monitor notes that little — if any — drought relief is expected from the Plains to the Pacific Coast states, with precipitation during the upcoming monitoring period mostly confined to the northeastern quarter of the nation. "A stronger-than-normal ridge of high pressure will span from the Canadian Rockies into the Southwest, maintaining dry, warmer-than-normal weather across much of the west. Temperatures will regularly top the 60-degree mark as far north as the central High Plains, and will exceed 80°F in the Desert Southwest," it states. "Farther east, a modest surge of cool air into the eastern one-third of the U.S. will be followed by another round of below-normal temperatures across the Midwest and East toward week’s end. On Wednesday night and Thursday, a high-wind event can be expected across the northern and central Plains and the western Corn Belt, while blizzard conditions will affect the Red River Valley."

Tags:
$100 Ideas
Supporting Science and Innovation are the Best Defense
Analyst: June PPD "Blowing the Doors Off Anything We've Seen Before"
Retrograde Motion
FMC Corporation Partners with Nutrien Ag Solutions to Deploy Arc
A Look at USDA’s Farmers to Families Boxes at the Food Pantry