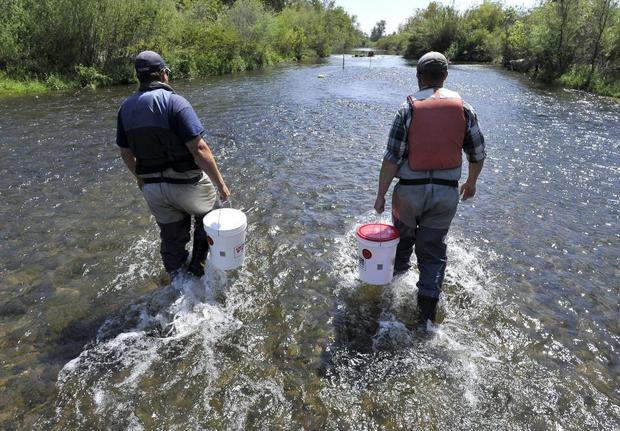 A multi-billion dollar project to bring salmon back to a dried-up section of California's second-longest river is moving forward despite the state's historic drought and complaints from some farmers who reluctantly agreed to give up some of their water allotments to support the effort.

Federal biologists say the San Joaquin River Restoration Program is yielding valuable information about spawning conditions in a part of the river where salmon hadn't been seen for almost 60 years and that suspending the project now would mean sacrificing hundreds of young fish, The Fresno Bee reported Sunday.

"We learned a lot last year about this river in a drought," U.S. Bureau of Reclamation fish biologist Don Portz told the newspaper. "We know a lot more about where the fish are in the river and what they need to survive in this river."

The 6-year-old project resulted from a legal settlement between the Natural Resources Defense Council, an environmental group, and the Bureau of Reclamation. The environmental group sued the bureau in 1988 over claims that the government violated state wildlife laws when it erected Friant Dam near Fresno in the late 1940s and diverted water that had allowed salmon to run on the San Joaquin.

Now that California is in the grips of a record drought, some farmers think the project needs to be reevaluated in the context of other priorities, according to The Bee. Kole Upton, a member of the Chowchilla Water District board who grows wheat, cotton, almonds and other crops, said reviving the 60 miles of river that have gone dry will deplete about 300,000 acres of farmland.

"If society values a few salmon over that much agriculture, I guess that's what we have to live with," he says. "But it will be a huge cost to the Valley, not to mention billions of dollars to complete this project. Is that reasonable?"

The drought has kept the bureau from releasing water specifically for the river restoration for more than a year. So far, the fledgling salmon populations have survived on water directed to farmers, including a larger than usual release last year from a reservoir north of Fresno that was tapped to supply growers who were unable to get their usual allocations from the Sacramento-San Joaquin River Delta, the Bee said.

"A few people might have thought it was for fish," Portz said. "It wasn't."

To revive the salmon, he and his colleagues trap young fish on the river and truck them upstream so they can make their way to the Delta and eventually the Pacific Ocean. Last year, they captured trapped 2,393 fish, but this year the number has dropped to 561. Portz thinks the salmon have succumbed to the appetites of river bass and warmer water.

The cost of the project is expected to include the construction of bypass channels that would allow the salmon to travel to the Pacific Ocean and back to the river for spawning.

"The goal is to work together to restore a swimmable and fishable river that flows past farms and communities," Natural Resources Defense Council senior scientist Monty Schmitt said.