It also widened the price differential between Henry Hub and foreign markets outside of North America, increasing interest in the potential export of liquefied natural gas (LNG). As of May 17, 2013, 26 applications have been filed with the Department of Energy (DOE) for authorization to export domestic LNG to foreign countries. The Sabine Pass Liquefaction LLC and the Freeport LNG Expansion LP and FLNG Liquefaction LLC are the only two companies that have received DOE's approval to export domestic LNG to both Free Trade Agreement and non-Free Trade Agreement countries. These companies also need to file with the Federal Energy Regulatory Commission (FERC) for approval to construct LNG export facilities. Sabine Pass is the only company that has received FERC's approval to construct liquefaction facilities in Sabine Pass, Louisiana. This terminal is expected to start service in 2016.

Strong natural gas exports and lower imports reduced net imports to around 1,516 Bcf in 2012, the lowest level since 1990. 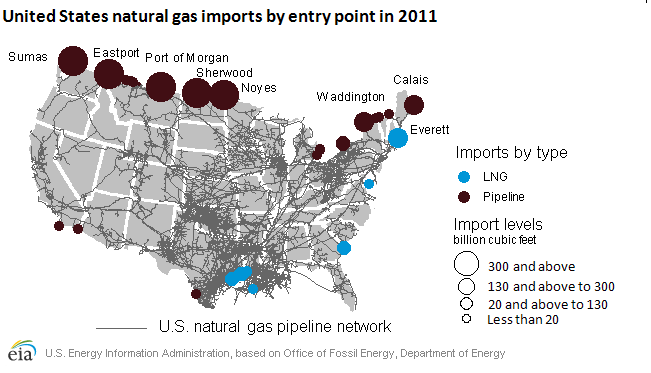 About 88 percent of all U.S. Natural gas imports were received at six entry points (Port of Morgan, Eastport, Sherwood, Noyes, Sumas, and Waddington) in 2012.

Total natural gas exports increased by 8 percent to 1,619 Bcf in 2012, a new high. The growth in exports was driven by increased pipeline exports, which grew by 11 percent. This growth offset about a 42 Bcf decrease in LNG exports and re-exports.

Exports and re-exports by exit point --

About 68 percent of all U.S. Natural gas exports was delivered through four exit points (St. Clair, Roma, Ogilby Mesa, and Clint) in 2012.