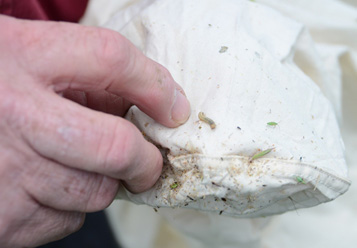 Mild March temperatures extended the spring season and brought armyworm moths to Indiana in populations not so abundant since 2001—a year entomologists dubbed "The Year of the Armyworm."

Purdue Extension's black light trapping network has been finding substantial populations of the insect, especially in the northeastern part of the state. While this isn't necessarily a disastrous scenario, Purdue Extension entomologist John Obermeyer said corn growers need to be out scouting their at-risk fields.

"Though most of the armyworm moths are blown here from the southwestern states, a percentage will overwinter in the Midwest if winters are mild," he said. "We know that moths have been active before our April 17 start date of the black light traps."

Obermeyer said it's impossible at this point to know how many armyworm moths are present or how active they have been in Indiana. But based on when moths were first seen flying in the state, he said it's likely that moths not only are actively mating and laying eggs, but there probably are larvae up to three-quarters inches feeding on Indiana corn, wheat, grass hay and grass cover crops.

"Corn that has been no-tilled into a grass cover crop, especially annual rye, should be inspected immediately for armyworm feeding," Obermeyer said. "We've been made aware of some wheat fields being converted to corn because of freeze damage, and these, too, should be considered high-risk.

"Hatched larvae will move from the dying grasses to emerging or emerged corn."

Armyworm feeding will give corn a "ragged" appearance, and the damage will extend from the leaf margin toward the midrib. There are no other insects this time of year that will display the same feeding damage that armyworm will, Obermeyer said.

"Depending on the population, most of the plant can be consumed," he said.

Because armyworm feed only at night, Obermeyer said finding the insect during scouting can be a challenge. In wheat, growers should concentrate on areas of dense growth. They also should inspect for notching on the leaves once flag leaves have unfurled. Growers also can carefully uncover crop residues or soil clods to look for curled-up larvae.

With abundant moths and eggs and larvae already in fields, Obermeyer said farmers need to be diligent about monitoring their fields multiple times. While some Bt hybrids might resist armyworm, the insect still can cause significant damage before plant proteins can reduce feeding.

He also noted that seed-applied insecticides will not control armyworm, regardless of application rate.

"In short, there is no in-plant or on-seed solution that will allow you to avoid scouting on this one," Obermeyer said. "Remember, once armyworms get to an inch or more in length, they eat a tremendous amount of foliage in a short period of time and become harder to kill. Some areas of fields seem to disappear overnight.

Read the AgWeb Online Field Guide to learn more about this pest.