President Donald Trump remains in U.S. farmers’ good graces, according to the latest Farm Journal Pulse survey, despite an ongoing trade war with China and a 2019 average net-farm income that is projected to be less than half of what it was in 2013.

The Pulse survey sent via text to approximately 5,000 farmers on Monday asks, “Do you approve or disapprove of the way Donald Trump is handling his job as president?”

Of the 1,129 farmers who responded to the survey, 50% say they strongly approve while another 24% say they somewhat approve. 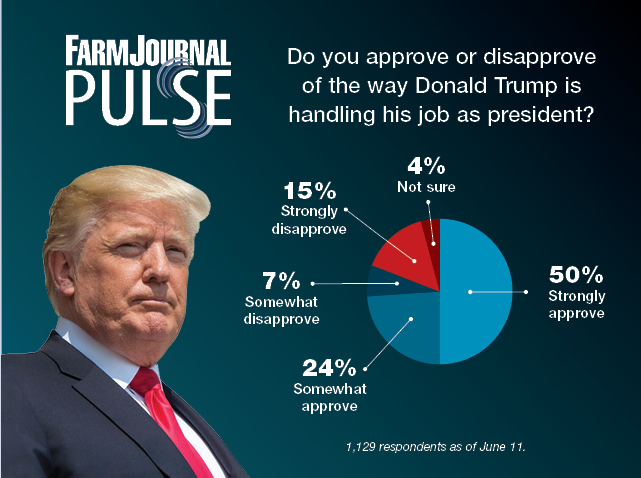 Farmer approval ratings for Mr. Trump are statistically the same as they were in December 2018, when the Pulse survey regarding his job performance was first conducted. The survey has been conducted five times in the past year-and-a-half, the most recent in late April.

Randy Russell, The Russell Group, attributes the high marks for Mr. Trump to a couple of reasons, including his efforts to rein-in China’s theft of U.S. intellectual property.

“The Chinese have been stealing our intellectual property and forcing companies to transfer technology to them. We’re at a pivotal point, and for the first time we’ve got a president who’s trying to do something about it. Farmers may not agree with every tactic he uses or everything he says, but they support what he’s trying to accomplish,” Russell said earlier this year.

In May, Mr. Trump announced tariffs on $200 billion worth of Chinese imports. Beijing responded by imposing duties on $60 billion worth of U.S. goods. President Trump has said he is prepared to apply additional tariffs on $300 billion of Chinese goods, if a trade resolution with the country is not forthcoming. He is supposed to meet with China president Xi Jinping at the G-20 summit, which is scheduled for June 28-29 in Osaka, Japan.

To review interactive maps from previous Pulse surveys, go to Agweb.com and click on the link, Farm Journal Pulse. Text the word PULSE to 31313* to participate in future surveys.