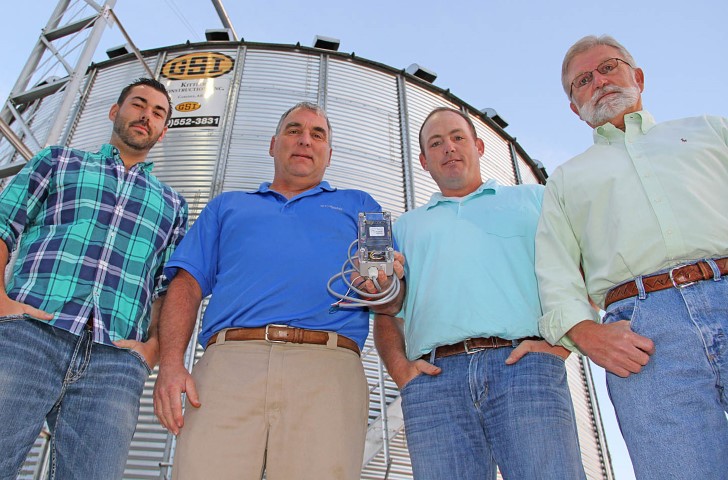 Grain bins flashing in his headlights, Matt Schafer turned off his truck, checked his .40.-cal. pistol, and began another midnight vigil on his Lonoke, Ark., farm. He was playing a futile numbers game, hoping to catch copper wire thieves at his grain bins – and Schafer knew he was losing.  Worn from a cat-and-mouse grind, he fell asleep clutching the gun – another night of empty returns.

Schafer’s grain bins had been stripped of wire and he was desperate: A $3,500 camera system; high-resolution video with a hard-drive; and sentry duty – all had failed. “I woke up at 3 a.m. and was sick of it,” remembers Schafer. “I felt like an idiot; hiding in my truck with a pistol and waiting on thieves that don’t sleep and don’t stop.”

Grabbing an iPad in the cab and searching for wire theft solutions, he came across Indiana-based Net Irrigate, a company with a pivot-monitoring device. Schafer contacted Net Irrigate and asked if they could apply the technology to grain bins. “I kept bulldogging them and they came down and took a look at our bins – probably just so I’d leave them alone.”

Caught in the Act

In the aftermath of repeated theft, Net Irrigate, in conjunction with Schafer and two other Lonoke producers, Scott Mitchell and Jerry Kelly, developed BinSnitch – wire protection for grain bins. (Prior to BinSnitch, Mitchell and Schafer’s bins systems were hit once each, and Kelly’s bins were hit four times -- $150,000 in damage.) BinSnitch wires into a grain bin’s electrical system in less than an hour and when a wire is cut; panel box opened, or the device disturbed – BinSnitch contacts as many people as are programmed to receive warnings. Automated phone calls, texts, and alerts shoot out with precise GPS coordinates of bin locations. The alerts are sent out instantaneously, allowing farmers and law enforcement time to catch criminals in the act of theft or vandalism.

“If someone opens my panel box or cuts a single wire, BinSnitch contacts me immediately because it’s part of the electrical loop. “BinSnitch calls me, my wife, my employees, my son, and the sheriff. We can catch them in the act and that’s how to get a conviction,” says Mitchell.

BinSnitch runs off a lithium battery and if a grain bin power system is turned off, BinSnitch remains functional and the battery lasts up to eight years. The battery will send out messages and alerts when it gets low.

“For a farmer, it’s hard to describe the frustration when you work all day and go home feeling good, only to come out the next morning and find damage from thieves. It’s hard for me to tolerate working all day while some guy on drugs comes on my farm, steals my wire, and puts my operation at risk. He gets paid in cash at a scrapyard, goes home, and then I deal with the aftermath,” describes Mitchell.

The agriculture industry is recognized as a soft target, but copper wire theft isn’t merely about repair costs for farmers. Time lost is also a heavy factor, and the risk of losing a crop looms largest of all. A bin hit when grain is drying can hammer an operation; lost wire is genuine trouble, but a lost crop can lead to ruin. In addition to wire protection, BinSnitch also prevents grain theft or tampering.

“For BinSnitch, I hope a grower puts it on and never has to use it. He’ll sleep better at night knowing his harvested crop is protected. At a given time, a bin system will contain over $1 million in grain,” says Mitchell. “If a farmer had a $1 million in cash money stored in his bins, he’d race out of bed each morning to check it. However, with grain, a farmer might say, ‘My grain is just fine in my bin.’ Farmers can’t afford to get that comfortable.”

The efforts of Schafer, Mitchell and Kelly to protect grain bins turned into AgSecure, a distributor business partnership that markets BinSnitch. “Farming full-time and working with AgSecure takes a tremendous amount of effort – but we find a way,” says Schafer.

AgSecure has also developed PumpSnitch -- wire theft prevention for agriculture wells. However, PumpSnitch also allows a farmer to operate wells via smartphone from any location or control a well with a timer. Mitchell says PumpSnitch directly saves water – cutting farmer costs and boosting conservation. “If 10 wells are pumping at 1,000 gallons per minute, that makes 10,000 gallons per minute. If PumpSnitch saves one hour of pumping per day, that’s 600,000 gallons in savings.”

PumpSnitch protects in the same manner as BinSnitch by wiring into the electrical loop and sending out alerts after any disruption. “Farm Bureau offers a waiver of deductible for any farmer using PumpSnitch or BinSnitch and there’s one reason – both work.”

High copper prices coupled with drug addiction ensure the wire and metal theft epidemic is not going to end for farmers. Wire theft remains an illicit billion-dollar industry, but for grain bins and wells, Mitchell believes he has an answer. “Wire thieves are relentless and they keep coming back. We are farmers and we had these products designed for farmers. Our first concern is our fellow farmers; we’ve been through the pain of theft and know how it drains an operation. Theft is over with when BinSnitch and PumpSnitch are in place.”