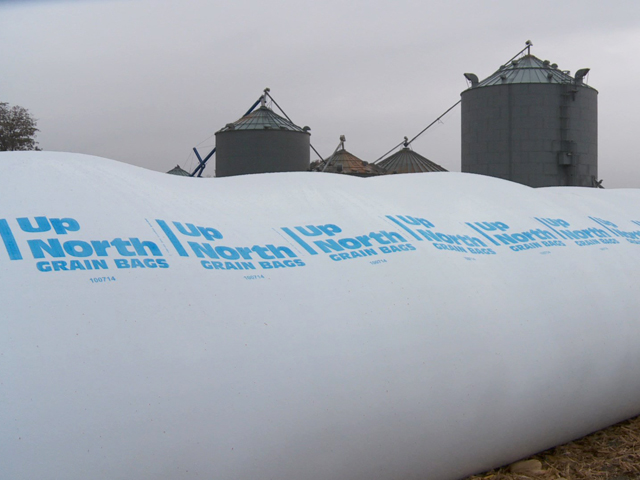 Elevators around the Corn Belt are using temporary and emergency storage to hold this year’s massive crop, but some farmers are trying to cut additional holding and drying costs by bagging their own grain.

Harvest may be over, but the work for Grant Noland isn’t.

“Our model is we try to keep majority of our grain on farm. It’s a risk on our side but it allows us to capture a higher price point at a later point of the year,” said Noland.

For the first time, the central Illinois farmers is storing his grain horizontally in bags, as a way to cut storage and drying costs at the elevator.

“Present point, we are pretty full close to being full of our storage. We put bags out as a means to get us through maybe twenty percent of our harvest,” said Noland.

He’s hoping to take advantage of a possible higher market down the road.

“It’s been nice to try to capitalize and taking those bushels and maximize on them,” said Noland.

He says others in the eastern Corn Belt are going that route, too, something Noland hasn’t seen much of in his area until now.

“At the local facilities, the ground piles, you see those every year with big yields. You don’t see it on the producer level,” said Noland.

Noland estimates he’s saving about 40 cents a bushel by storing in bags instead of a local elevator. The bag loader however is a big expense, ranging in price from $25,000 to $40,000.

“If you load constant grain to it, it will probably fill about 15,000 bu. an hour. It is just keeping grain coming at that pace,” said Noland.

It’s an expense he feels is worth it.

“The local facility levels commercial storage rates increased. Drying rates are not decreasing in costs. So for us, we had to make the decision for an alternative option,” said Noland.

Because he’s trying to capture the carry, his goal is not a long term storage solution, but long enough to do what the market tells him.

“Our plan is to at some point, between now and February, we’re going to have the opportunity to move grain. We will probably move upright storage to the market place and pick up our storage and put in the upright storage,” said Noland.

Noland thinks a new era of bagging may be beginning and hopefully his work is worth it.

“I think it’s something we will do on an annual basis,” said Noland.

Noland says the market gave him a chance to move some grain early because of the October rally. He says he dried all of the grain, so he’s not worried about it spoiling.