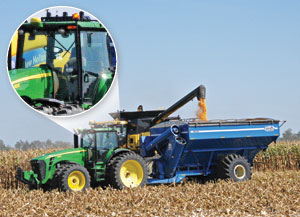 In the middle of harvest, Monmouth, Ill., farmer Rick Elliott got a call from one of his neighbors. "He was driving by and asked me, ‘Is there anyone in that grain cart tractor?" Elliott says.

There was no cause for alarm—the tractor was following the combine through the field, unloading on the go, without anyone in the cab. Elliott’s farm was one of three in Illinois testing the Kinze Autonomous Harvest System.

"After unveiling our project in July of 2011, we are excited to demonstrate it in the field," says Susie Veatch, vice president and chief marketing officer of Kinze Manufacturing, Inc.

The Kinze Autonomy Project started in the lab in 2009 and was tested on the Kinzenbaw farm until this year. The harvest fleet includes a combine, tractor and grain cart outfitted with GPS sensors and rugged computers. The system is controlled by the combine operator’s tablet computer,  eliminating the need for an operator in the tractor cab.

"The goals for this system are efficiency, productivity and safety," says Rhett Schildroth, Kinze product manager. "Farmers are experiencing a shortage in skilled operators for the seasonal work at harvest and planting. We also know that it’s key for the system to run as safe at the end of the day as it did at the beginning."

Components on the tractor are: GPS receiver; inertial measurement sensors for hills; wheel  encoders; LIDAR (light detection and ranging) sensors; radar sensors for far-reaching sensing; and a camera to see what the systems sees.

Components on the combine are: an emergency stop button; GPS receiver; communication module that networks the machines; and a tablet computer, which is the user interface.

How it works. The system performs in four modes: follow, unload, park and idle. In the follow mode, the tractornand grain cart follow the combine’s path through the field using GPS guidance. The system reads where the combine has operated and designates those areas as safe for travel. If obstacles are known or encountered in use, the operator marks them to be avoided.

When the combine is ready to be unloaded, the tractor and grain cart pull alongside it and sensors provide real-time reaction to any adjustments made by the combine in regard to speed and direction.

"The system is continuously scanning for obstacles in the field so that when it’s time to meet the combine, it calculates a path factoring in any obstacles. If it can’t map around an obstacle, it stops," Schildroth says. "Right now, it doesn’t run as fast as a human operator would—7 mph when following the combine; 9 mph for field travel."

To park the tractor and cart, the combine operator hits the park button and the machinery returns to a designated area at the edge of the field.

In idle, the system comes to a stop wherever it is until further instruction.

"The technology is hidden from the farmer. He has the tablet and that’s all—four buttons and an aerial view of the field," Schildroth says. "Keeping it simple means our farmers learn how
to use the system in an hour, and within a day it’s part of their routine."

"We wanted flat ground for this initial testing, and this area had good crops despite the tough growing conditions this year," she says. "There were three farmers within 8 miles that were willing to be part of our project."

Elliott Brothers Farms (brothers Rick and Dan and other family members), Kent Armstrong and Joe Krupps were chosen to participate. All are Kinze customers through Painter Farm Equipment.

"Ten years ago we were skeptical about GPS, automated steering, planter clutches and other technologies," says Todd Painter of Painter Farm Equipment. "But those have been highly accepted by our customers. We have 80% or more of our customers using GPS technologies on their farm. Technology is here to stay, and this autonomous system is the next thing to come."

Krupps, who farms near Galesburg, Ill., says he is not quick to adopt technology and doesn’t currently use auto-guidance or steering systems. But he says the autonomous system was easy to bring onto his farm.

"I’m not exactly a technology leader," he says. "The whole system surprised me—how well it worked, how they made it user-friendly. It follows instructions better than some employees, including myself."

Armstrong started using automated steering systems on his farm just three years ago and says he’s impressed with the accuracy of the system.

"I haven’t run any corn on the ground this harvest unless it was my own fault," he says. "The tablet gives you a countdown for how long it’ll take for the cart to get to the combine, and the cart stays right with my auger."

The Elliott Brothers farm has multiple machines with GPS auto-guidance and RTK steering systems, but Rick Elliott reports the system fit easily into their operation. "The system is designed the way a farmer would have done it," he says. "It’s simple to give the system the command you want in the field—four buttons, that’s it."

On and off. The tractor can be switched from autonomous to manual mode. When the tractor is in idle mode, the farmer lowers the bottom step, which uses sensors to automatically disengage the autonomous system. The operator has control until he exits the tractor and lifts the step to
re-engage the system.

In autonomous mode, before the tractor leaves its designated parking area, the lights flash and the tractor beeps and revs its engine to send an alert that it’s about to move.

The company has demonstrated the technology on John Deere tractors but says the system is compatible with any make of tractor or combine. Once it is commercially available, Kinze plans to offer kits for specific models.

For now, the system is designed for a variety of harvesting conditions. For example, when cutting soybeans at an angle, the system follows the combine path and reacts in real time. Amid waterways, it understands tilt, and if the wheels start spinning in wet conditions, the tractor shuts off.

Field testing yielded some changes as well. "The biggest improvements this year are that we added the tablet as the user interface, and with adjustments to the software, we improved the time it takes for the tractor’s path to be determined," Schildroth says.

Although there isn’t yet a date for commercial availability, Kinze is working on autonomous technology for planting applications. The system is designed only for in-field, off-road use.

"Farmers want increased productivity and rapid return on investment, and we’ll continue to innovate around the autonomous solution," Schildroth says. "Next year, we’ll have more testing."

To watch a video of the Kinze Autonomous Harvest System in action, visit
www.FarmJournal.com/follow_the_driver