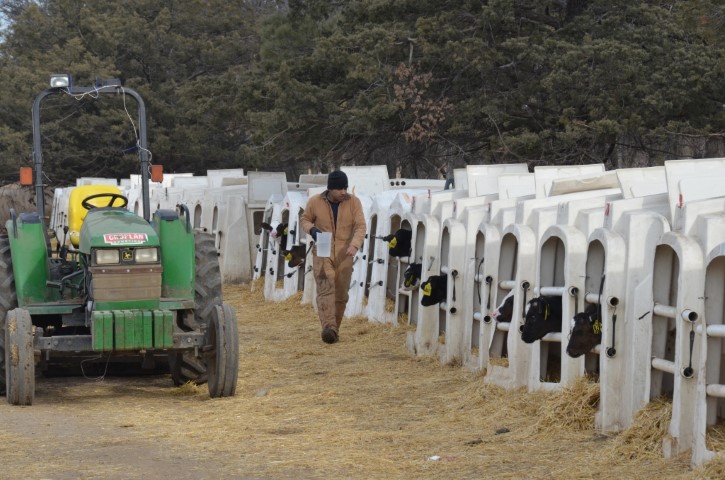 Feeding the next generation of dairy cows a little more could be beneficial to long-term production.

Last week during a seminar at World Dairy Expo the principle of feeding calves more often was discussed by Donald Sockett, epidemiologist/microbiologist for the Wisconsin Veterinary Diagnostic Laboratory at the University of Wisconsin-Madison.

Historically, calves were fed twice a day because producers only milked cows twice a day. Sockett says calves have been fed improperly for over 100 years.

A normal calf on its mother will nurse eight to 12 times per day in the first seven days of life.

“As calves get bigger and they start growing, they will nurse larger volumes per meal and less frequently,” Sockett says. By one month in age calves will nurse approximately four times per day.

Sockett sees a lot of calves come through the diagnostic lab that passed away from abomasitis. Some of the cases are related to bacteria loads in the milk, but Sockett believes many cases could be prevented if feeding frequency was increased.

A recent study showed when calves are only fed twice a day the abomasum sits empty too long and low pH levels can result, this may lead to stomach ulcerations.

Sockett has conducted his own research with other members of the University of Wisconsin to look at the impact of feeding milk replacer three times a day compared to twice a day. Seventy Holstein calves were split into two feeding groups: 2X feeding and 3X feeding.

There was no difference in starter intake up to six weeks of age, but when the weaning process began by feeding calves once a day there was a marked increase for calves on the 3X feeding treatment.

The reason those 3X feeding calves ate more starter was because they had higher maintenance requirements because they were much larger says Sockett. 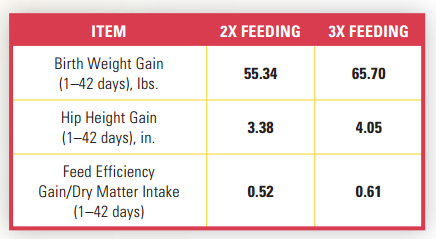 “The calves were already bigger at 10 days of age, fed 3X per day,” Sockett adds. “Isn’t it amazing if we feed the calves more like momma would they do better?”

On the production side calves fed 3X were more likely to enter the lactating herd than 2X.

“Five to 10 years from now the normal standard in our industry will be feeding calves a minimum of three meals per day,” Sockett adds.