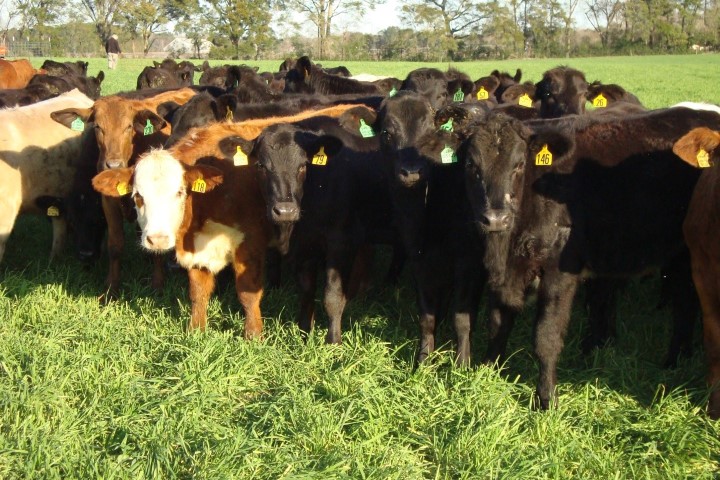 The Sunshine State will continue to play a key role in the record success of the beef industry.
By: Richard Mullins, The Tampa Tribune

Dennis Carlton slowly rolls his pickup through a herd of hundreds of mother and baby cows meandering in the midmorning sun around the Audubon Ranch property north of Plant City.

"Come on there, get up," Carlton gently calls out to a calf lying in the grass. "If they're lying down, they're not eating," he jokes. As far as the eye can see, there are open fields of grass and cattle pacing about. Cute as they may be, speaking strictly financially, each calf represents $600 to $700 on the market, roughly twice what it was just two years ago.

Being a seventh-generation Florida rancher gives Carlton quite a perspective on where beef prices are going, and he says burger and steak fans may just have to get used to paying more. "At least for the next two or three years; then we'll see where things stand."

Though Florida may be known for Disney and oranges, dozens of massive ranches make this state one of the largest cattle producers in the nation. One ranch alone, the Deseret Ranches in St. Cloud, stretches to 295,000 acres — roughly 20 times the size of Manhattan Island.

Times are good, lately, for those ranchers. Virtually every factor of the beef industry is pushing up prices: weather, shrinking herd sizes, corn prices, energy prices, growing foreign demand. In turn, the price of ground chuck at Publix stores in Tampa is $4.49 a pound, up 25 percent from last year and 50 percent from 2010, and a New York strip steak last week cost about $13.99 a pound when not on sale.

"A lot depends on the droughts, but there are a billion people moving into the middle class around the world, and given the choice between chicken and a steak, they're gonna pick the steak," Carlton says.

Florida largely plays the role of the maternity ward for the U.S. beef industry. Three of the top five largest calf-producing ranches in the country are within 150 miles of Tampa, and the state overall has 1.7 million cattle when dairy cows are included.

From Florida, thousands of semi-trucks each season carry 8-month-old calves to massive feedlots in the Midwest and West where they grow on corn and other grains. As cattleman often say, it's easier to send the calf to the grain than the grain to the calf. The reason: pure math. A calf in Florida is subject to more heat and swampy sicknesses and will gain less weight by eating grass alone, compared with dry-climate lots in Texas or Oklahoma, said Wes Williamson, president of the Williamson Cattle Co. and president of the Florida Cattlemen's Association.

Once calves are sent West, market forces really begin to push up the final prices customers see in the beef cooler at the grocery store.

Severe Western droughts several years ago forced ranchers there to send cattle to market lest they die of hunger or thirst. That may have temporarily boosted supply and tamped down prices, but the move also shrank the overall herd size dramatically going into the next year. The U.S. cow-calf population fell from 96 million in 2007 to 89.9 million in 2012, according to federal statistics. Presently, the total cattle population in the United States has shrunk to levels not seen in 60 years, all while the human population in the U.S. has almost doubled.

Ironically, this cycle of moving cows across the nation means customers here at Publix or Wal-Mart buying a steak may be looking at a product raised in Hillsborough County, then trucked to Texas, then processed in Missouri into quarters, refrigerated and then trucked right back to a store in Plant City.

Higher prices have some moving into the cattle industry.

Chas Bruck, the Tampa developer behind The Heights project along the river downtown, also manages property in the region destined for housing or industrial use.

"We had been leasing land to a cattle rancher," Bruck said. "Then we looked at the matrix and said, 'That's a pretty good return — better than the stock market.'?" So Bruck had his rancher buy more cattle. They now run 60 cows at a plot near the Suncoast Parkway and 40 more in Brooksville.

Bruck said some developers will put so-called "junk cows" on land merely to maintain the lower tax level for agricultural operations until they're ready to build, but he's trying to buy more cows whenever he can.

"It's been an interesting business," he said, compared with building apartments or homes. "But, say that cow gets sick and dies. You have to write off that asset. I can see how hard it would be to get ahead doing just cattle."

Carlton is lucky enough to lease some land directly from Hillsborough County, including the Audubon Ranch area. In exchange, he pays to maintain the land with a crew of employees that fixes miles of fence and keeps out invasive species such as wild hogs and a new, bright green thorn bush that's popping up all over the state.

Even with high prices at the grocery store, the beef industry, unfortunately, can't react quickly to produce more. As Florida ranchers like to say, anyone can get into the chicken or pork business within a couple months. All a farmer needs is an acre or two for a barn. Hens can produce hundreds of chicks a year, and pigs produce a dozen babies each birth, letting farmers rapidly expand supplies.

Cattle, by contrast, take enormous amounts of land, and the time frame stretches years. A cow takes nine months to gestate a calf. Then the calf takes eight months to grow large enough for a feedlot, then two to three years to become a full-size cow. Any rancher trying to rapidly expand their herd needs to retain more cows to become birth mothers (reducing the population for the market), and the cycle begins again.

So ranchers are now dealing with a herd size dictated by decisions made at least four years ago — not this year. For now, prices are high.

"If it rains out west and the pastures come back, maybe we'll see more cattle," Carlton said. "That could have an effect on prices. But I think we're at a new plateau."