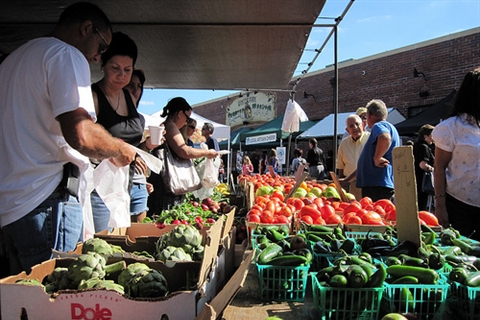 Move over farmers' markets. More than 300 food hubs around the country are also providing small farms another outlet to sell locally raised food to consumers.

There's no one model for a food hub — it depends on the market, the location and what it is grown in that area. Some collect food from farms and dole it out to customers in weekly deliveries. Other hubs help consumers, restaurants, colleges and institutions to source food online. But producers, consumers and experts all say food hubs have an important thing in common: it's an efficient way to get locally raised food to those clamoring for it.

"We've seen in the last few years in particular as local and region food systems have grown and become not only larger but kind of more sophisticated that there has been a need for sort of the logistics of moving food from the field to the consumers. And food hubs kind of fill that space," said Doug O'Brien, deputy undersecretary for rural development for the U.S. Department of Agriculture. The agency spent about $25 million from 2009-2013 supporting food hubs.

The number of food hubs has doubled over the last six years, and many are in urban areas, with the Northeast leading the way. Some operate as nonprofits, others are for-profit or producer-consumer cooperatives. Some are modeled after CSAs, or community supported agriculture, where consumers pay up front for food throughout the season.

That's how the Intervale Food Hub in Burlington, Vermont, works, with 30 farms, 15 specialty producers and 1,100 members who pick up their weekly bundles at various sites around the city. The venture started in 2008 with just 192 members and 24 farms.

Legal secretary Betsy Bourbeau says the food hub's deliveries to her place of work are more convenient than shopping at farmers' markets and cuts down time at the store.

"I spend much less time looking at grocery sales, clipping coupons, driving around town and finding parking. I just bring home my food on Wednesday and figure out what to make," said Bourbeau, 50, who gets produce, bread, cheese, eggs and specialty items for about $38.50 a week — less than she would spend at a farmers' market.

For farmers, food hubs provide distribution, marketing and, in some cases, processing and storage.

Predicting what will sell at a farmers' market is a challenge, according to Ray Tyler of Rosecreek Farms in Selmer, Tennessee. By getting involved with the Bring It Food Hub in Memphis, Tyler can plan ahead for the next growing season, when the hub plans to double its membership to 400.

"Basically instead of us spending all this time on marketing, we can now spend more time doing what we love to do and that is growing great food," he said.

The emerging business model can be challenging, says Bring It Food Hub operations manager Alex Greene, because you have to cater to customers and be flexible with farmers, whose product is at the mercy of weather. Food hub leaders need "a sense of the end product" and have to learn the logistics, plus "managing the website, the online credit card system and other technical matters," Greene said.

To that end, the University of Vermont is starting in January what it says is the nation's first Food Hub Management Certificate Program.

"Many food hubs are up-and-coming businesses with staff who need further training or experience," Cynthia Belliveau, dean of Continuing and Distance Education, said in a news release. "High-quality staffing is one of the greatest challenges food hubs face, and it's also a key contributing factor to their success."

One of the two farmers' markets that Josephine and Randy Alexander of Tubby Creek Farm in Ashland, Mississippi, had planned on selling at fell through this year, but they were able to sell most of the extra produce to the food hub.

The Alexanders are currently planning ahead for their next season's food hub offerings — carrots, salad turnips and lettuce mix.

"It simplifies it a little bit for us and that way we can do more of those things that we do really well, in targeted way," she said.