Forage Growers Should be on the Lookout for Alfalfa Weevil 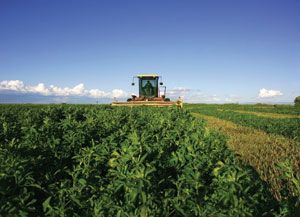 Alfalfa growers need to be on the lookout for weevils in their fields as temperatures rise.

Alfalfa weevil is an insect pest that can cause damage ranging from light and non-economic defoliation to devastation of first-cut alfalfa. Populations and feeding damage increase as temperatures rise in the spring, which means the pest is more prevalent early on in sand soils and south-facing slopes that heat up more quickly.

Purdue Extension entomologists Christian Krupke and John Obermeyer said now is the time to get out into the fields to look for alfalfa weevil. They offered some tips for growers.

"Sampling an alfalfa field to determine the extent of alfalfa weevil damage and average stage of weevil development is best accomplished by walking through the field in an M-shaped pattern," Krupke said. "Ten alfalfa stems should be examined in each of five representative areas of the field for a total of 50 stems from the entire field."

Growers should examine each stem for:

Obermeyer said that while large alfalfa larvae are relatively easy to see, small larvae aren't. That means growers should closely examine leaves for pinhole feeding, small black fecal pellets and small off-white larvae. If feeding is noticed, alfalfa weevils are the culprit; there are few other pests of alfalfa this early in the season.

If growers find alfalfa weevils, they will need to determine whether a rescue treatment is warranted. They can make that decision by looking at the number of weevils found and the size of the alfalfa plants.

Another option, depending on the timing and severity of feeding damage, is to cut alfalfa a few days earlier than planned.

Obermeyer created a video of Krupke demonstrating how to scout for alfalfa weevil. It's available in the latest edition of Purdue Extension's Pest and Crop Newsletter.