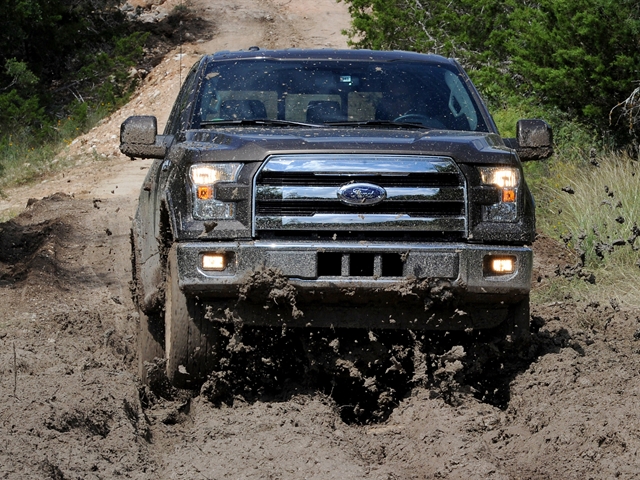 Ford Motor Co. executives spared no expense in overhauling the crown jewel of their empire, the F-150. They gave the truck a new aluminum body, smaller turbocharged engines and a lighter and stronger steel frame -- all with an eye to appease U.S. regulators demanding cleaner vehicles. The initiative took six years and cost Ford more than $1 billion.

The problem, though, is that some versions of the new F-150 still don’t meet the government’s 2016 emission and fuel-economy mandates. What’s more, the hurdles get higher from here: By 2025, the targets will be much more stringent. The stakes for Ford couldn’t be greater. Ford’s F-Series, America’s best-selling truck line, accounts for 31 percent of the company’s North American sales and half of its profit in the region, according to Barclays analyst Brian Johnson.

Ford is trying to safeguard this profit center as global regulators push harder than ever for clean air. In the past year, Volkswagen AG, Mitsubishi Motors Corp. and Suzuki Motor Corp. admitted to manipulating emissions and fuel-economy tests. Hyundai Motor Co., Kia Motors Corp. and Ford have had to apologize for misstating fuel economy on window stickers.

“Not meeting the standards is not really an option, especially on your most profitable product,’’ said Gopal Duleep, president of H-D Systems, a Washington research company. “On fuel economy, the regulators allow you to pay a fine if you fall short. But on greenhouse gas, they don’t. You either meet the standard or they shut you down.’’

Cutting fuel consumption reduces greenhouse gases, so Ford and other manufacturers are racing to incorporate new technologies in their pickups, including gas-electric hybrids and 10-speed transmissions. They also may plead for relief during a so-called midterm evaluation of the U.S. requirements beginning this month. Just retooling the factories that produce the F-150 cost $1.2 billion, according to figures provided by Ford.

Ford is scrambling because about 40 percent of its new aluminum-body F-150s don’t comply with the 2016 mandates, Duleep estimates. The four-wheel-drive, 3.5-liter SuperCab –- which Ford says accounts for about 2 percent of F-150 sales -- falls 1 mile per gallon short and emits 15 grams of CO2 per mile more than allowed, he said.

Since most two-wheel-drive models with smaller engines do comply, the F-150 program as a whole meets the targets. But by 2025, the MPG requirement for SuperCab-size trucks will have jumped by a third to 33.3 and the CO2 limit will fall by the same percentage. The fuel-economy numbers refer to test results; real-world driving and window-sticker displays can be 20 percent lower.

Detroit automakers don’t know if they can comply with the stricter regulations at an acceptable cost to customers and shareholders, according to people familiar with the situation.

“The question is, do consumers pay for this technology or just get it for free?’’ said Warren Gibbon, a portfolio manager for Standard Life Investments in Boston, who helps manage $373 billion and sold his holdings in big Detroit car companies in 2012. “If it’s the latter, it will be tough for automakers to make a good return on their investment.’’

All this increases the importance of the standards evaluation. President Barack Obama agreed to it in July 2011 when he announced a 54 percent increase in the corporate average fuel-economy requirement -- to 54.5 mpg in 2025 from 35.5 in 2016. He also mandated a cut in average greenhouse-gas emissions to 163 grams of CO2 per mile from 250. The first step in the evaluation is a technology assessment the Environmental Protection Agency, National Highway Traffic Safety Administration and California Air Resources Board are scheduled to publish this month.

Progress on clean air has stalled because low gasoline prices boosted the popularity of pickups, minivans and sport utility vehicles, which tend to pollute more than cars. As a result, average greenhouse-gas emissions from new models were six percentage points higher in March than in August 2014, and the fuel economy of models sold in May was down 0.4 mpg from the same month, according to the University of Michigan Transportation Research Institute.

Mary Nichols, chairman of the California board, said regulators were caught off guard by the truck surge and now need to push manufacturers to equip them with the same fuel-saving technologies as cars, including aerodynamic designs and more gas-electric hybrids, especially in small trucks used for personal transportation.

Sergio Marchionne, chief executive officer of Fiat Chrysler Automobiles NV, has said his 2018 model Ram will save fuel with a bigger battery that lets the engine shut off at stoplights

Thirty percent of Ford’s F-150s already have this type of battery, and the share will rise to 60 percent next year. By 2020, Ford will have a hybrid pickup with batteries powerful enough for daily driving, CEO Mark Fields has said.

Ford also is testing a diesel-powered F-150, according to a video posted on Autoblog.com, and may add a 4-cylinder engine for the first time in the U.S., a person familiar with the plans said. That may be a hard sell on the farms and construction sites where Ford has championed big, powerful V-8s for decades.

GM -- which is bashing the durability of F-150 aluminum beds in new ads -- will be forced to join Ford in using more aluminum to save weight in components including engine blocks, transmission cases, fenders and doors, said Mark Stevens, a retired GM vice president for engineering and manufacturing.

The new technologies save fuel but add thousands in consumer costs, including for features such as 360-degree cameras. Between 2011 and May 2016, the average price of full-size pickups jumped 24 percent -- almost triple the pace for all new vehicles -- to $41,606, according to J.D. Power & Associates.

Regulators measure fuel economy and emissions by setting separate car and truck targets for each size vehicle, then using sales-weighted formulas to determine a corporate average. They give credits for eco-friendly technologies, including aerodynamic design, then fine companies whose fuel-economy average is still too low.

Detroit faces an uphill battle for pickup relief because it already extracted a huge compromise: Obama agreed in 2011 to keep SuperCab-size truck mandates relatively flat for a decade and then accelerate them as fast as those for cars.

Automakers now want more time to reach the 2025 targets, even if they can’t change the direction regulators are heading. Within nine years, the U.S., European Union, China and Japan are scheduled to require fuel economy of 45.9 mpg or more and CO2 emissions of 122 grams per kilometer or less. Hitting the CO2 target in the U.S. means a 53 percent reduction since 2000, according to the International Council on Clean Transportation.

Automakers also are pressing U.S. regulators to expand credits for eco-friendly technologies, the people familiar with the situation say. These include more for self-driving vehicles, which could save fuel by improving traffic flow, and for big vans like Ford’s Transit, which can haul a dozen or more passengers.

“Increased fuel efficiency costs consumers much less than the savings they get over the life of the vehicle,’’ said Dan Sperling, a California air-board member and professor of civil engineering and environmental science at the University of California at Davis. In 2012, the EPA and NHTSA projected buyers would spend $1,800 to meet the new standards but save at least $5,700 on gasoline during their vehicle’s lifetime.

“This is one of the smartest and best things our country can be doing for the economy and the climate,’’ Sperling said.

What do you think of the Ford F-150 overhaul? Let us know what you think in the comments.