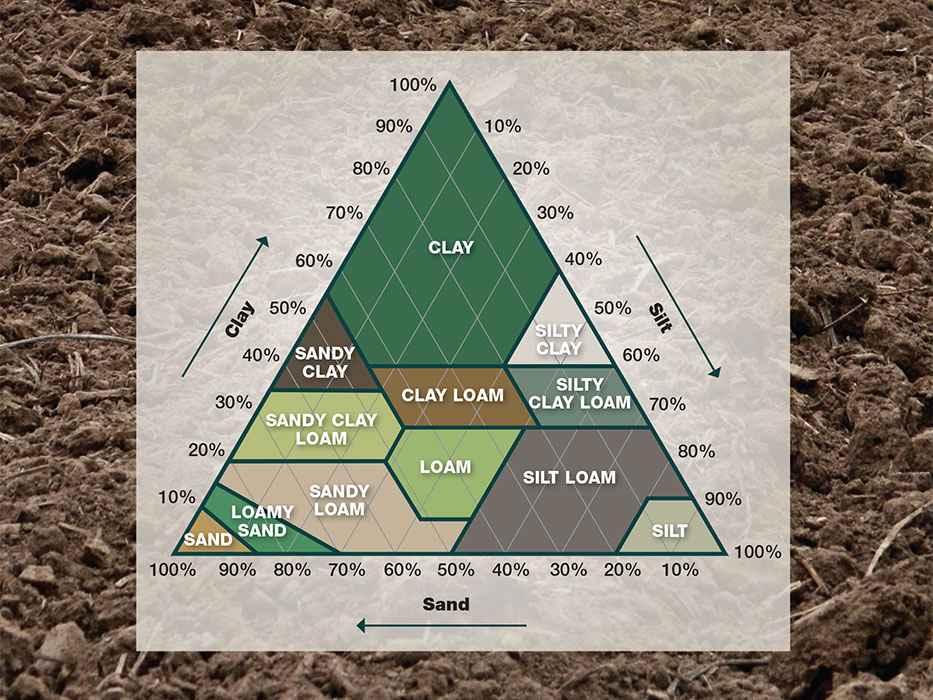 The percentage of sand, silt and clay particles determines the texture of your soil. Within most soil types, you can improve soil health by taking steps to improve aggregate stability and penetration resistance.
( USDA; Illustration: Lindsey Benne )

Think about it: No matter how much management, labor and fertilizer you apply, and regardless of the quality of seed you plant, it’s the soil that underpins how much food and fiber you produce.

In celebration of World Soil Day, Ken Ferrie, Farm Journal Field Agronomist, shares four steps to a Systems Approach to soil management. “Farmers have always looked at the individual components of soil health, such as fertility, tillage and water management, but to really improve soil, we have to look at all the components together,” he notes.

The first step is defining your soil health objective. “I like to define soil health as sustained productivity,” Ferrie says. “But we could also call it ‘maintaining profit,’ not just for ourselves but for our kids and grandkids.”

Soils were not created equal in terms of yield capacity. “Soils differ in their ability to produce a crop,” Ferrie explains. “Your lightest soil, even in the best of health, may not keep up yieldwise with a darker soil in poor health. It’s like comparing a 17-year-old to an 80-year old. Even though both are healthy, the teenager is more athletic.

“Even if he’s overweight, the 17-year-old may still outrun and outjump a fit 80-year old. With soils, too, some are naturally more athletic. But by making all our soils as healthy as possible, we maximize each one’s productive capacity.”

The second step is knowing the difference between unhealthy and healthy soil. The characteristics of unhealthy soil, the kind you want to—have to, if at all possible—improve, include:

The characteristics of healthy soil include:

The third step is evaluating the management aspects of soil health—think of them as chemical, physical and biological.

You already understand the chemical side. It’s the nutrient and pH analysis that you find on your soil test.

“Physical aspects like soil texture—the percentage of sand, silt and clay particles—make some soils more ‘athletic’ than others,” Ferrie says.

There’s a huge difference in the size of those particles. “Think of it like this,” Ferrie says. “If a sand particle is a 747 airliner, a silt particle is a Cessna and a clay particle is a hummingbird.”

Another physical aspect is aggregate stability. “Healthy soil has particles bound together, in a crumblike structure, or soil aggregate,” Ferrie says. “Different sized aggregates create macropores, which hold water that can be extracted and used by plants. Smaller pores, called micropores, also hold water, but it is bound tightly to soil particles and unavailable to plants.

“In healthy soil, if you immerse an aggregate in water, it will hold together. If the aggregate falls apart, sand
remains in the upper layer, while silt and clay shift downward in the soil profile. This changes macropores into micropores, inhibiting water percolation,” Ferrie explains.

“So aggregate stability translates directly into available water-holding capacity—the amount of usable water your soil can hold above the water table,” he summarizes.

“For practical purposes, the water-holding capacity determines how heavy a population you can plant—something you must understand to use variable-rate technology.”

Another physical property of soil is penetration resistance. You can think of it as compaction or soil strength. When soil is free of compaction and dense layers, it is easier for crop roots to penetrate. It’s also easier for water to move upward, via capillary action.

The biological aspect is organic matter—the portion of soil that was once living plants or animals. That’s one of the things that makes soil microorganisms so important. They mineralize organic matter into nutrients that crop plants can use.

Soils with higher levels of organic matter can retain more nutrients. This is called cation exchange capacity (CEC) and is expressed as a numerical value.

Each component—chemical, physical and biological—can be tested, providing benchmarks to measure your progress in improving soil health.

The fourth step is to start improving the health of your soil. Tackle the easiest steps first. These include balancing fertility and pH levels and using vertical tillage to remove compacted layers, Ferrie says. Improve drainage if you and your landlords can afford the investment.

After that, the options get tougher. “Reducing tillage is beneficial,” Ferrie says, “but it may delay planting, especially in northern areas. No-till may be difficult in poorly drained soils. Some can’t be no-tilled until you improve structure. Changing tillage systems requires its own Systems Approach, from planting through harvest.”

“Diversified crop rotations are better for soil health, but they don’t fit many operations that have specialized in a few crops for efficiency,” he says. “For new crops to be practical, they require markets, storage capacity and often livestock.”

“But just like adding new cash crops to your rotation, cover crops require knowledge and good management to be successful—so do your homework first. Decide what cover crop to plant, based on the cash crop that will follow it next spring.

“Decide now when you’re going to kill the cover crop next spring—and who will kill it, you or your retailer,” Ferrie says.

Determine whether you will have to pay a carbon penalty because of the increased residue created by the cover crop—and, if so, how you are going to pay it. Whether there’s a carbon penalty will depend on which cover crop you plant and which cash crop follows it.

Short growing seasons add to the challenge. “Planting a cover crop without fully understanding all these things is failing to apply the Systems Approach,” Ferrie says.

The conundrum with soil health is maintaining profit as you make improvements. “The most profitable farms may not be the healthiest, and the healthiest farms may not be the most profitable,” Ferrie says. “But when you find that balance, you’ll have a farm that is healthy, profitable and sustainable for your generation and generations to come. Those are the fields our kids and grandkids will farm in the future. Let’s leave them a legacy of healthy, sustainable soils.

“That’s the goal we have to keep in mind as we invest our time, money and effort in improving soil health. It will be worth the effort,” he adds.