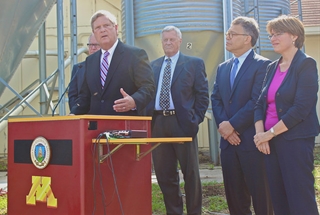 Sen. Al Franken got an election-season bump Thursday from an Obama administration official on an issue he's tried to build into a cornerstone of his campaign: agriculture.

U.S. Secretary of Agriculture Tom Vilsack visited Minnesota to tout new safety net programs for farmers, part of the 2014 farm bill passed after a yearslong slog. Standing in front of tall farming silos on the University of Minnesota's St. Paul campus, Vilsack, Franken and other members of Minnesota's congressional delegation congratulated one another for the passage of the bill, which they deemed a big win for the state's farming community.

Franken has leaned heavily on the farm bill to bolster his legislative portfolio for re-election. That legislation plays a lead role in his latest ad, which features a Minnesota farmer who says Franken "has worked his heart out for us" since narrowly winning his U.S. Senate seat in the 2008 election.

Republicans cast Vilsack's Thursday stop in St. Paul as a reminder that Franken has close ties to an unpopular Obama administration. Franken's opponent, GOP businessman Mike McFadden, called the visit "a reward for voting with President Obama 97 percent of the time."

Agriculture is big in Minnesota — for business and politicians alike. One in every five Minnesota jobs are connected to food production, and candidates try to court some of those votes every year at the state's annual Farmfest trade show in Redwood Falls.

Vilsack applauded Minnesota's congressional delegation for its outsized role in the final product. He called Franken "a champion of the renewable energy side," a reference to the freshman Democrat's role in writing the bill's energy section.

In both his latest ad and remarks Thursday in St. Paul, Franken stressed the bipartisan work that went into crafting and passing the farm bill. President Barack Obama signed the bill in February.

Downey tied Franken to delays in building pipelines that would move crude oil across Minnesota. He said Franken is responsible for the ensuing railcar shortages that have hit farmers across the state with shipping delays.

He said Vilsack's visit was a sign to Republicans that Franken's re-election hopes may be in trouble.

"It's a little bit of show, and he probably needs it because he's weak in greater Minnesota," Downey said.