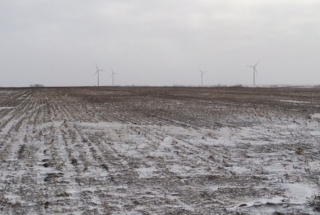 Cold temperatures gripping the Plains states have pushed winter wheat into dormancy and halted planting, but experts say the wintry weather will help the crop in the long-run as melting snow replenishes soil moisture.

The winter storm's impact on planting will be "a bigger deal" than the possibility of spotty winterkill in western Nebraska and the northeastern Colorado border where temperatures are expected to dip below zero by Thursday morning, agricultural meteorologist Don Keeney of MDA Weather Services said.

Wheat planting was already behind schedule across the southwestern Midwest, even before the cold hit.

Nebraska was finished with its wheat planting, but Oklahoma had seeded 96 percent and Texas had planted 88 percent of its winter wheat, the National Agricultural Statistics Service reported Monday. Missouri had 74 percent of its wheat seeded, while Illinois had seeded only 84 percent.

The storm is not expected to impact Kansas much, Keeney said.

"The fields that haven't been planted, they will not get planted, but that is about it," Keeney said. "I don't think it will be a big deal in Kansas. If anything, the snow that they will get early next week will certainly be a plus for the wheat."

In Kansas, about 96 percent of wheat acres had been planted as of Sunday, compared to 99 percent that was already in the ground at the same time last year, according to NASS.

The state has also had some good soil moisture this fall compared to the last three or four years, he said.

"Certainly we want to be cautiously optimistic at this point in time because we are a long way from harvest, but (there has been) certainly more fall growth than we've had in recent memory," Henry said.

Snow is preferable to heavy rains because it usually melts slowly and seeps more easily into the soil, he said.

"Overall, I think (the storm) is going to be a plus for the wheat," Keeney said.

The storm will also delay the harvest of some fall crops for three to four weeks, particularly in parts of the country that have already gotten heavy snow. Those harvest delays will spread into the west central Midwest by early next week.

The Kansas corn harvest is 92 percent finished, but just 67 percent of sorghum and 84 percent of soybeans has been harvested, NASS reported.

"It wouldn't hurt the crop itself, but it will certainly keep the farmers out of the fields," Keeney said.