“This is a huge picture and the most important contest in 50 years for the U.S., but we have not had a broad-based awareness as a country to know what’s at stake. However, now we’ve got certain communities that are experiencing the front lines, and that’s what’s happening to American farmers.”—Jonathan Ward
( White House/Shealah Craighead )

As the United States and China play tennis in an economic minefield, American farmers are forced to watch from the stands, and no matter how the current tariff war ends, a roller coaster ride for U.S. agriculture may be only just beginning in the long game of U.S.-China economic competition.

At the 2018 G-7 Summit, President Trump cited the U.S. as “the piggy bank that everybody is robbing.” However, “everybody” doesn’t hold a candle to China on the international stage. In the vernacular: Brussels ain’t Beijing. China’s threat to the U.S. economy is without compare and its expansion as an economic and military juggernaut, led by Xi Jinping, essentially a dictator for life, means the rise of an adversarial power enjoying a near-$400 billion annual trade surplus at America’s expense. Adding to the alarm, China is catching wind and has concrete plans for ascendance—i.e., solo occupation of the global catbird seat by 2049.

The ultra-high stakes chess match between international heavyweights leaves U.S. farmers exposed. Xi’s calculated use of agriculture as a battering ram to strike at the U.S. heartland is the preeminent farming issue of the 2018-2019 tariff war, with soybeans and other ag commodities piled on center stage. Yet, even if the current tariff war is resolved favorably for U.S. farmers, the future of U.S. ag exports to China is a looming question, and even the most sanguine predictions must reckon with a rapidly changing dynamic.

In 2017, the U.S. bought nearly $566 billion more in imports than American businesses sold in exports. China was central to the massive gap, muscling its way to a $376 billion surplus, almost double its defense budget, according to Jane’s. In 2018, the U.S. imported $539.5 billion in goods from China, and exported $120.3 billion in goods to China—a difference of almost $420 billion (an all-time, single-year record). From 1992 to 2016, China was the fat cat of U.S. trade imbalance, racking up $4-plus trillion in surpluses with a wink and a nod, while the U.S. bled jobs and manufacturing power.

Mark Stys, a geoeconomics analyst and president of WS Wealth Management, says in the short-term, the U.S. has competitive advantage and leverage. “We have a $21 trillion economy and China has a $13 trillion economy. Based on the size of the economies and how important exports are to both countries, every $1 of loss to us is an $8 loss to them. China exported $540 billion to the U.S. last year and that means 4.2% of their economy is built on exports to the U.S.”

China is also affected by agricultural circumstances unrelated to tariff pain, Stys explains: “Right now, they are feeling things that have nothing to do with U.S. actions. They’ve got 13 regions with an armyworm infestation, and that hits corn and other crops. Swine fever has swept into 31 regions, killing millions of their hogs.” 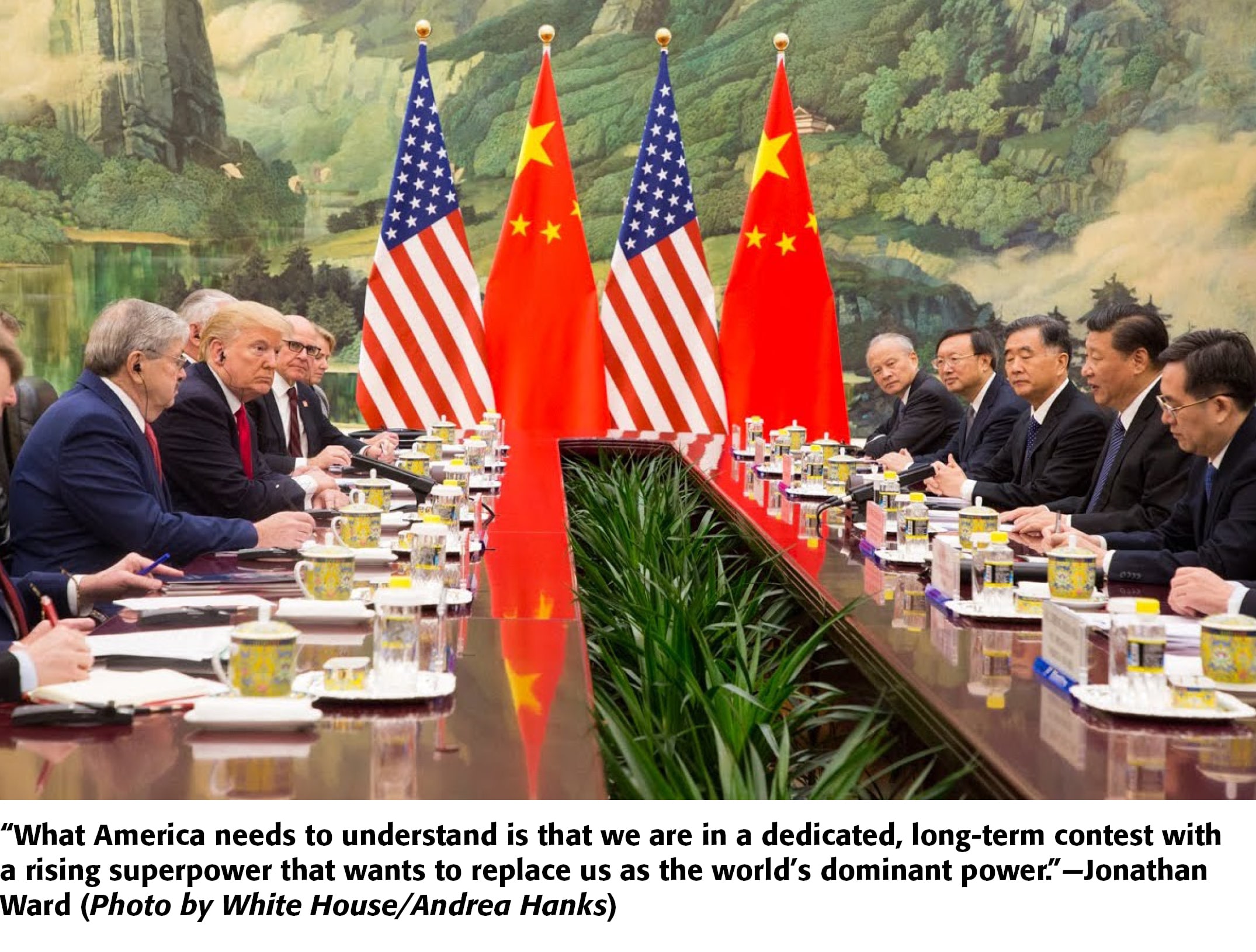 The total extent of armyworm and swine fever is unknown, but the damage is significant, according to Stys. “China doesn’t get a ton of fuel from us, but it does get a heavy amount of food. The Chinese economy is 70-85% capable of feeding its own population. Many estimates say swine flu and armyworm could knock out 20% of China’s ag production. That takes you down into 50-65% internal production.”

Stys expects tariff resolution at least by the end of 2019, but acknowledges U.S. farmers are in a precarious position. “Certainly, China can replace ag product sourcing and farmers could feel the brunt. But it wouldn’t be a shock to see the Trump Administration hand in goals to balance long-term trade to get commitments to increase income for agriculture. If that happens, U.S. farmers could also be winners.”

Over the past 30 years, U.S. officials knew a day of reckoning would arrive regarding China, but the fear of trade disruption ensured the inaction of successive presidential administrations—no one wanted to bell the cat. Further, Xi and his predecessors benefitted from Western insistence that China was on a dual path toward wealth and a modicum of democracy. However, in 1991, when the Soviet Union imploded and finally splintered, China took copious survival notes on the USSR’s downfall—crucial lessons learned. Recognizing economic prosperity as the vehicle to remain in power and sustain communism, Chinese leaders pivoted and hopped on the free market bus, riding as far as necessary and getting off whenever convenient.

Meanwhile, the West bought the feint, praised China’s new road, and championed a world order where democracy was inevitable across Asia. According to the political script, China was shaking loose its totalitarian past and marching toward a model of freedom. Remarkably, the praise from Western leaders drowned out the echoes of the benchmark Tiananmen Square massacre in Beijing, only a few years prior in 1989, when hundreds of protestors (possibly far more) calling for political reform were killed, along with thousands of arrests, during a military crackdown. (In a page pulled directly from George Orwell, Tiananmen currently is wiped from China’s history books and educational history. Nothing to see, but a memory hole; move along.) 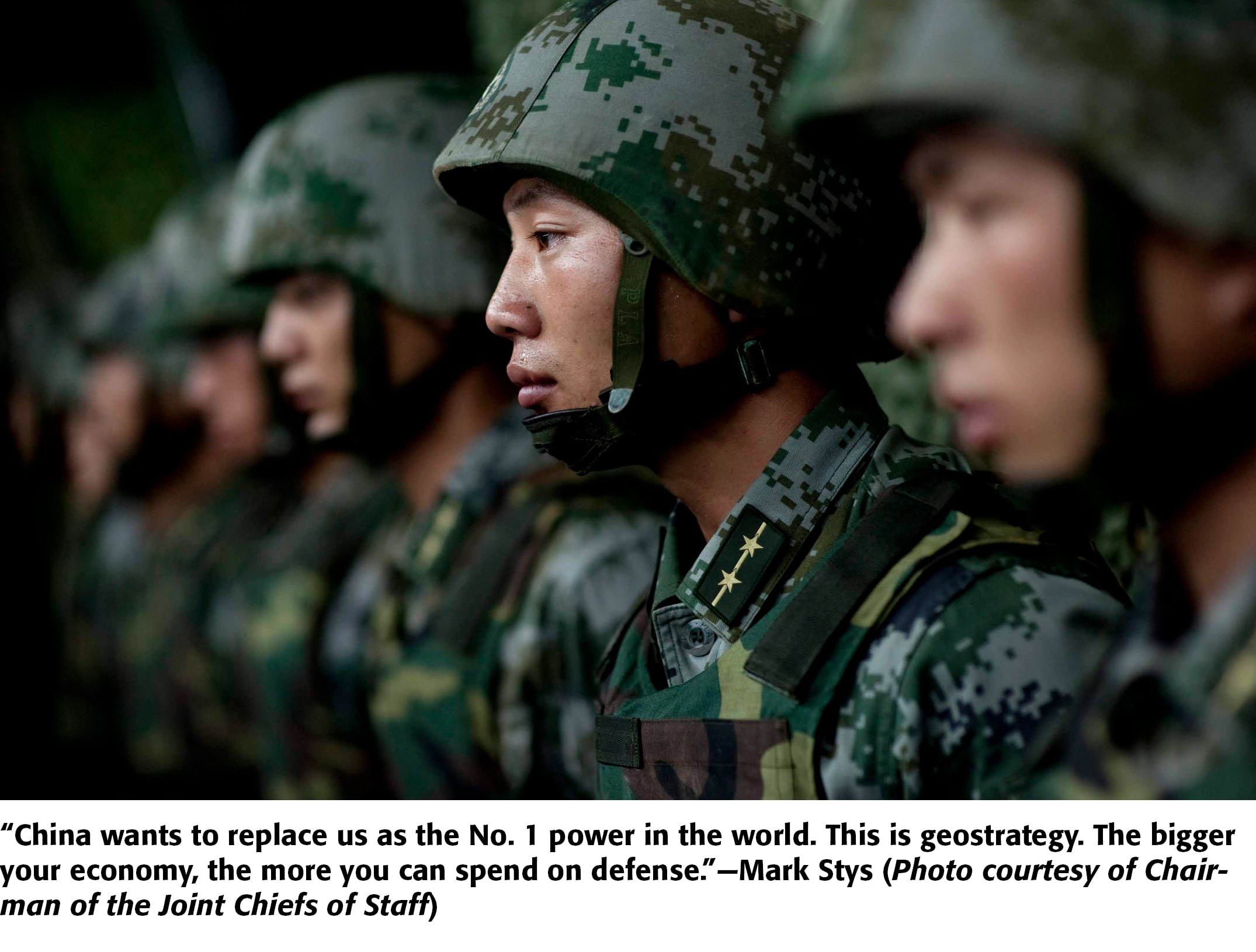 Yet, by 2001, just over a decade after Tiananmen, China had cemented most favored nation (MFN) status with the U.S., and waltzed into to the World Trade Organization (WTO)—and still operates with a “developing nation” designation. All the while, whole chunks of America’s manufacturing sector set up shop in China, and the trade imbalance became unrecognizable from a pre-1990 vantage point.

While the West slept, miscalculated or pursued policies based on willful ignorance, China flaunted WTO rules, restricted foreign investment, made massive investments in Africa and Latin America, put a stranglehold on the South China Sea, and committed industrial espionage, as well as intellectual property theft (including agricultural activity—corn and rice). A 2017 report by the U.S. Commission on the Theft of American Intellectual Property estimated a cost of $255 billion to $600 billion to the U.S. economy each year, and pegged China as the “principle IP infringer.” 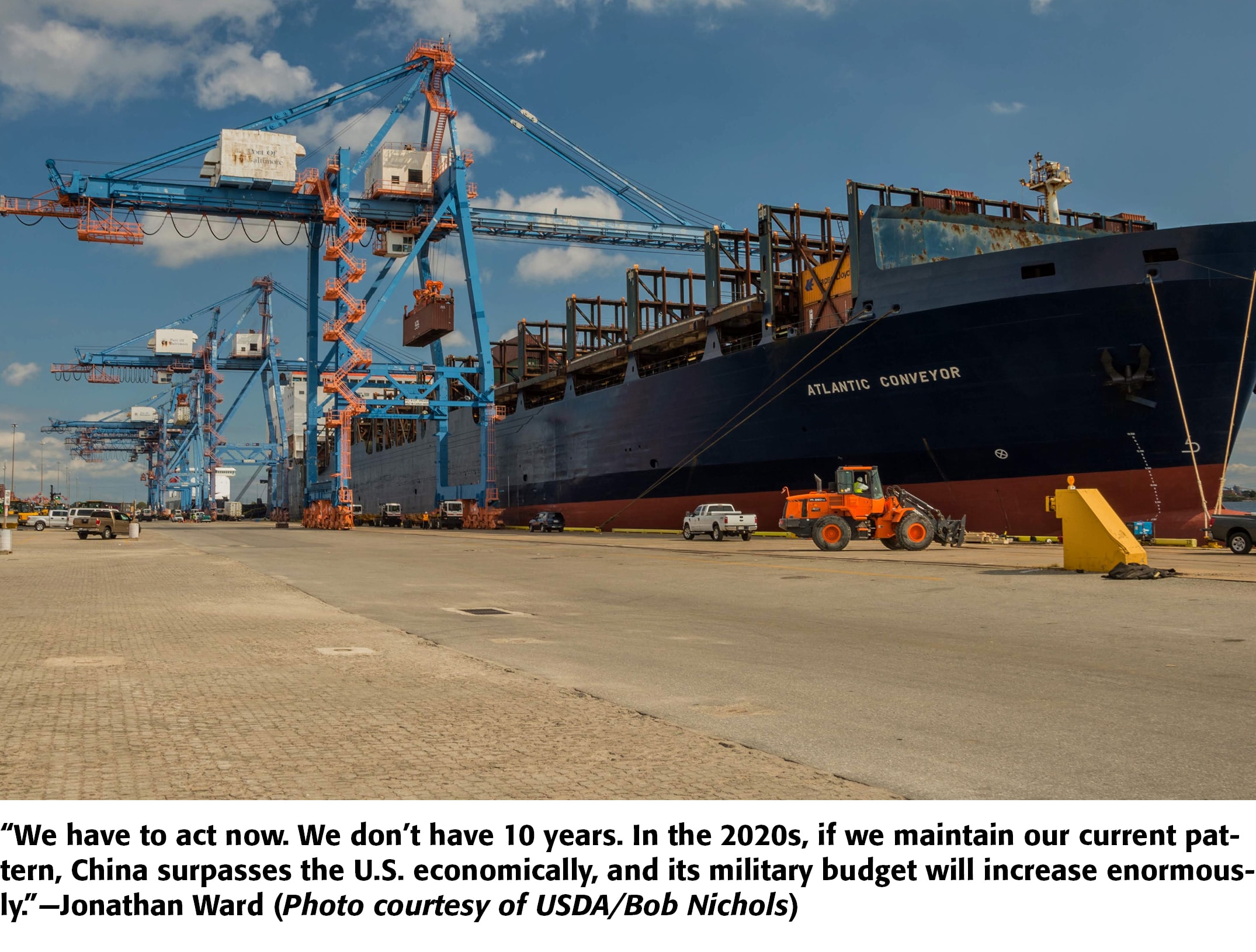 In addition, in 2013, Xi kicked off the Belt and Road Intiative (BRI), an incredibly ambitious infrastructure project that aims to give China unparalleled access to global trade by 2049. (According to the Council on Foreign Relations, roughly 60 countries have at least shown interest in coupling with the project.) Beyond BRI, another alarming program is Made in China 2025. Announced in 2015, Made in China is an attempt to dominate 10 high-tech industries by 2025—including information technology, artificial intelligence, telecommunications, electric vehicles, aerospace engineering, advanced electronics, biomedicine, high-speed rail, maritime engineering—and agricultural technology.

China’s advances over the last 30 years are stunning, but they are the achievements of a one-party dictatorship. Xi dangles his role as president to the media, but that tag is superseded by his title of “General Secretary of the Central Committee of the Chinese Communist Party (CCP).” Ruled by Xi, China remains a totalitarian state centered squarely on the 90-million member CCP.

The U.S. cannot afford to ignore China’s aspiration’s regarding global supremacy, contends Dr. Jonathan Ward, founder of the Atlas Organization, a consultancy for business and government on U.S.-China competition. “What America needs to understand is that we are in a dedicated, long-term contest with a rising superpower that wants to replace us as the world’s dominant power. And, it’s an authoritarian state where rights we enjoy in the U.S. and rights we’ve fought for over generations do not exist. Freedom of press, religion, and assembly do not exist; all of these features of American democracy are not there in China…We have to understand their growing economic power is going to be converted into military power.”

Xi plans to take China’s armed forces to complete military modernization by 2035—on pace to rival the U.S. in the Indo-Pacific. Chinese military spending likely topped $200 billion in 2018, according to Department of Defense estimates, outpacing the military expenditure of any nation except the U.S. Significantly, Xi has an entire army command dedicated to cyber warfare, the Strategic Support Force, established in 2015 as part of his military reform effort. (Also, in 2017, Xi had a Civil-Military Fusion program written into China’s constitution: Any innovation in the private sector must be transferred to the military.) 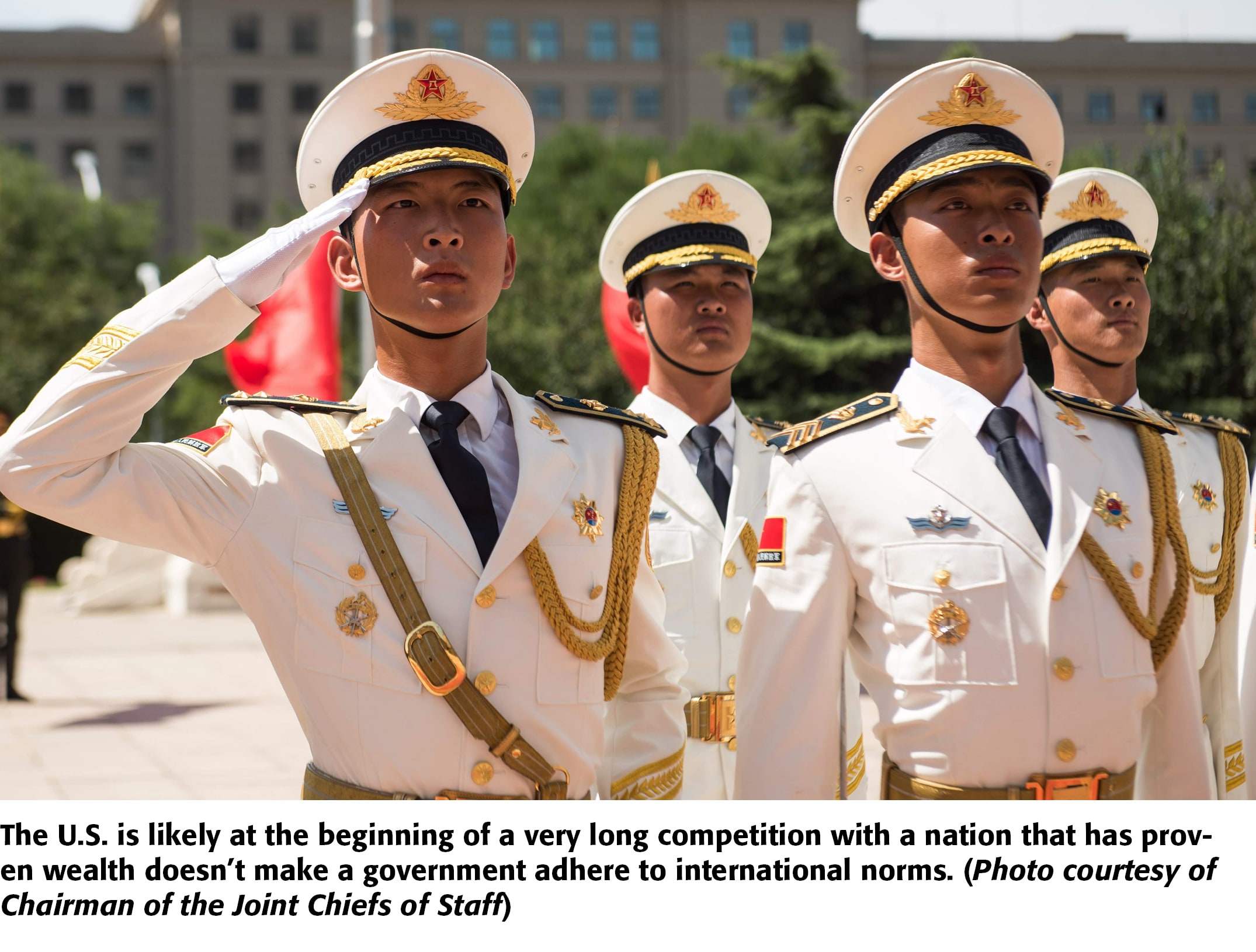 Ward believes China’s “long-term goal is to become a dominant global superpower by 2049, which is the 100th year anniversary of the founding of the People’s Republic of China. The only country standing in the way is the U.S. They are also going all around the world; this is not just China versus the U.S. This is China seeking to become the dominant power in a variety of regions.”

“This is a huge picture and the most important contest in 50 years for the U.S., but we have not had a broad-based awareness as a country to know what’s at stake,” he continues. “However, now we’ve got certain communities that are experiencing the front lines, and that’s what’s happening to American farmers.”

The trade war is one part of a competition that will continue to grind in coming decades, notes Ward, author of China’s Vision of Victory. The U.S. policy of coaxing China into the free world and inviting them into every major trade institution has backfired: “For the last 30 years, it has been all about engagement and hoping that China will be our friend. That has proven to be a failure and the evidence is everywhere you look,” Ward adds. “However, there is a consensus forming in D.C.—maybe the only thing both parties agree on—and that is taking on China.” 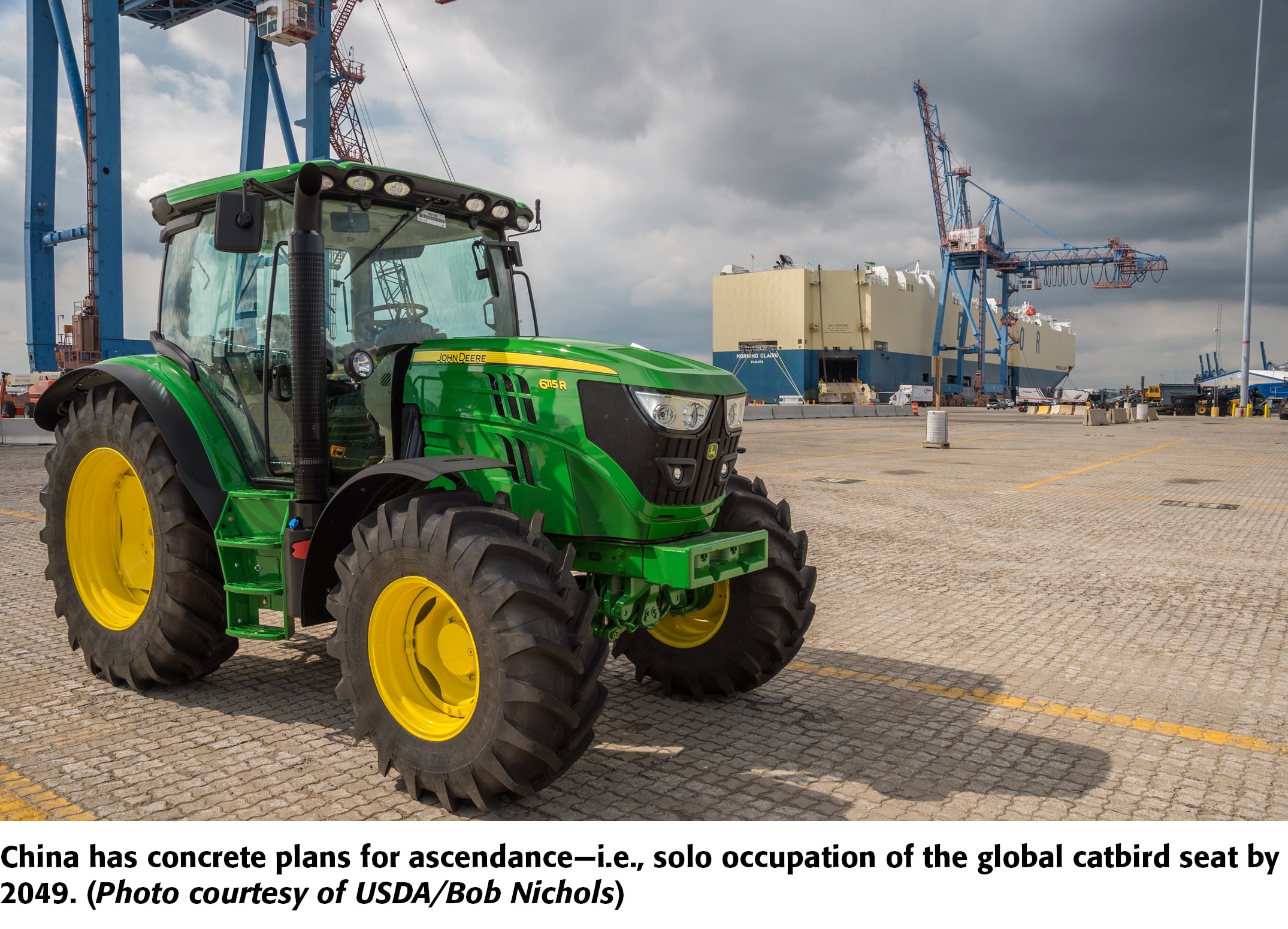 “We have to act now. We don’t have 10 years. In the 2020s, if we maintain our current pattern, China surpasses the U.S. economically, and its military budget will increase enormously. All the technological competition—artificial intelligence, 5G, and quantum computing—all the things that will define national power for decades into the 21st century, will happen. They have a plan and we’re just getting our act together. We have to do it now.”

What might the world look like if China gains supremacy and power? How would China use such a top-perch position? A present certainty: Basic freedoms don’t exist in China and the leadership is anchored to the CCP—the same party responsible for tens of millions of deaths since its founding in 1921.

The U.S. is likely at the beginning of a very long competition with a nation that has proven wealth doesn’t make a government adhere to international norms. According to Xi’s words and actions, China believes it can win, and believes history is on its side. “China wants to replace us as the No. 1 power in the world,” Stys says. “This is geostrategy. The bigger your economy, the more you can spend on defense.”

“They want to provide technology, loans and construction across the world and own the infrastructure of these countries. They want to be the producer and provider, and that is not a positive to the free world,” Stys concludes.

No matter the efforts of Xi, China must have food to feed 1.4 billion citizens. “In many ways, food is our advantage,” Ward says. “We have tons of friends in the world facing this same issue and very few want a world dominated by the communist party of China. The American farmer must be top of mind while we form a long-term strategy.”