Genetically Engineered Insects Next For Agriculture? 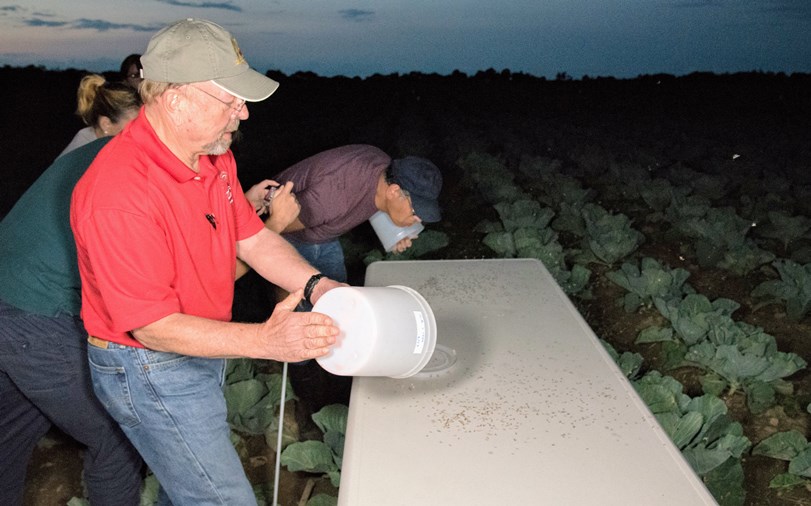 Want to crash an insect population? Slip in a self-limiting gene and topple the family tree in two to three generations. The promise of biotech mosquitoes to combat the pest that spreads Zika, dengue and yellow fever grabs the headlines, but just off center stage, the same technology utilizing genetically engineered (GE) insects is being tested on U.S. farmland.

With the flick of a genetic switch, agriculture could turn the sex drive of an insect against itself. The arrival of GE insects in farming could usher in a new wave of pest management, based on species-specific tools targeting pest insects, and result in a significant reduction in broad-spectrum insecticide applications. GE insects may provide growers with a major new pest weapon if all goes according to plan.

In the pantheon of devastating pests, DBM holds a top-tier perch, casting a long shadow across global farmland as a major crop killer of broccoli, cabbage, canola, cauliflower, and more, racking up $5 billion per year in damage. A consummate survivalist, DBM features a remarkable ability to develop resistance to insecticides (sometimes within two years) by reproducing a generation within a few weeks in the field. DBM has developed resistance to every insecticide class used against it, according to Shelton: “It’s a leader in the resistance movement and is the first insect to have developed resistance to Bt.”

Shelton is using technology developed by Oxitec to target DBM. Oxitec, at the vanguard of GE insect research and technology, has garnered a great deal of attention through its releases of GE male mosquitoes in Brazil and other countries. GE males mate with wild females and the resulting offspring die as a result of a self-limiting gene.

Shelton is testing Oxitec’s self-limiting technology in DBM trials. When Shelton releases DBM males modified by Oxitec, they mate with wild females. Through biotech engineering, all female offspring die. With the continued release of male moths over a sustained period, the number of females in the population drops precipitously and the capacity of the population to sustain itself is diminished.

In 1990, Shelton was asked by the International Atomic Energy Agency to work on a SIT project to sterilize DBM with radiation in Indonesia and Malaysia. The radiation dose sterilized the moths, but they didn’t hold up well to the treatment and weren’t fit enough to fly well and mate. The project was dropped due to the limits of radiation. Yet, rather than the sledgehammer of radiation, current GE insect technology is akin to precision surgery.

In 2015, Shelton and his colleagues completed GE DBM greenhouse trials proving the technology was effective—the pest DBM population crashed after several releases of GE DBM. Additionally, beyond triggering DBM population crashes, the trial also addressed insect resistance to Bt crops. “When we introduced the GE insects into the pest population, which we had bred to be resistant to Bt, the DBM population crashed and we also restored susceptibility to Bt,” he explains. “It’s like having your cake and eating it too.” In fall 2017, he completed open-field testing to assess the field behavior of GE DBM.

Shelton is currently conducting supplemental lab experiments and preparing to publish his overall findings in a peer-reviewed journal. “Growers need tools and this one is species-specific. There are so many concerns about the broad-spectrum effect of some insecticides on pollinators,” he notes. “If something as benign as genetic engineering helps control insects, growers will want to adopt this technology.”

Shelton also touts the potential for using biotechnology in diverse ways to help manage pests. Current discussion usually centers on the development of GE crops resistant to particular insects, but Shelton says rather than wading through the expensive and time-consuming process of creating and getting such crops registered, the focus also could be placed directly on engineering pests to control themselves: “In so many cases, maybe a more effective way of using biotech is to engineer the pest to take care of itself. We’ve got GE crops of all types, but let’s think about GE insects to supplement, or in some cases replace, those crops.”

“We’re at the cusp of utilization of GE insects. In 25 years, when someone sees an airplane spraying insecticides over a field, they may wonder if that’s the best way to control pests,” he adds.

Debut in a Decade?

Oxitec strains of Mediterranean fruit fly and fall armyworm are also in preparation. Are all agricultural insect pests a candidate for GE control? “The top consideration is whether they reproduce sexually,” says Neil Morrison, research lead for agricultural pest control at Oxitec. “That leaves most pests still on the table. Our technology is highly suitable for a whole lot of important pests.”

DBM has rapidly developed resistance to insecticides even when faced with sophisticated pest management programs. The mode of action within biotech DBM relies on mating, ensuring target-specific pest suppression, and avoidance of pollinators and other beneficial insects. Morrison says genetic engineering is a powerful alternative to insecticides and provides another much-needed IPM tool for growers.

GE technology in use with DBM has an additional benefit to direct pest suppression, in that male progeny initially survive. “If our factory colony is insecticide susceptible, those susceptibility genes are pushed out into the pest population,” Morrison explains. “We’ve done laboratory tests indicating this could have a powerful resistance dilution effect. We potentially have a powerful tool for managing insect resistance to insecticides in biotech crops.”

When could biotech pest control make a commercial debut on farmland? Timelines depend on the regulatory process, but Morrison expects some GE insect use within a decade. Navigating EPA requirements for GE insects is a trip into uncharted waters. “Others who come after us may have an easier time,” says Sarah Hoey, communications manager at Oxitec. “Given the nature of our solution, the success of Oxitec relies on partnerships with each country. Working closely with collaborators around the world, we’re able to develop the best strategy for each location.”

Morrison believes GE technology is a powerful pest control agent and says the benefits extend beyond suppression: “This relies on mating and has the potential to reduce pest populations lower than other methods, but there is more: It protects other tools in the toolbox. Genetic engineering could be a solution for growers that find it difficult to control pests sustainably using conventional tools. In terms of IPM, this can fundamentally change the ways pests are managed.”

“We’re very passionate about this opportunity. Growers face increasing pressure to control pests in a way that doesn’t harm the environment beyond their fields,” Morrison adds. “This technology is one of the most sustainable means of pest control, period, and it has a lot to offer growers and the environment.”