Give Your Soil a Physical Exam 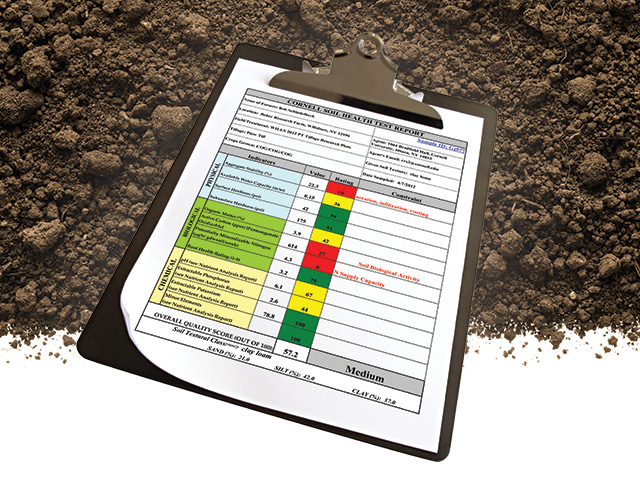 It’s a good idea to pay a visit to your doctor every year—even if you’re feeling fine. A complete physical exam can give you the piece of mind to keep doing what you’re doing, or it could uncover areas of concern.

Soil is no different. "By evaluating the health of soil, we can get an idea of what’s good; what’s bad; learn where to start making improvements; and set benchmarks to measure progress," explains Farm Journal Field Agronomist Ken Ferrie. "The process can tell you whether a piece of land you’re thinking about renting or purchasing will be a sound investment."

There’s no time like the present to add a soil physical exam to your arsenal of management tools. "The sicker soil gets, the harder it is to bring it back to health," Ferrie says. "New tools and laboratories offering soil quality analysis enable us to give soil a physical exam."

You can’t expect all soils to attain the same level of health, Ferrie points out. "That would be like expecting an 83-year-old person to perform like a 17-year-old," he says. "When you
understand your soil, you can make the most of what you have."

What to assess. A soil health evaluation involves assessing chemical, biological and physical aspects. You’re already familiar with the chemical aspect, which is your soil test. The biological aspect includes soil microorganisms that break down old crop residue and make nutrients available to plants.

"Soil texture—the amount of sand, silt and clay particles—affects nutrient- and water-holding capacity," Ferrie says. "Farmers know water percolates easily into sand because of its large particles and pore spaces, but it tends to move right on through. It’s harder for water to infiltrate into a silt loam soil, but it tends to stay there after it enters. So the silt loam has more water-holding capacity."

Think of aggregate stability as how well the soil maintains a crumb-like structure, in which sand, silt and clay particles are held together by organic matter and glues given off by mycorrhizal fungi.

How to test. You can determine the percentage of sand, silt or clay by squeezing moist soil in your hand and trying to make a ribbon. "If it won’t make a ribbon, it’s sand," Ferrie says. "How long a ribbon you can make determines whether it is silt loam, clay loam or some other texture."

USDA’s Natural Resources Conservation Service (NRCS) offers an online soil survey to help determine soil texture. You can also have it analyzed in a commercial laboratory.

"The online soil survey is an excellent resource," Ferrie says. "Just choose your state and location, and it will tell you your soil types. From that, you can figure out the physical properties, such as organic matter content, bulk density, percent sand, silt, clay and water-holding capacity."

Using GPS technology, an app called SoilWeb lets you stand in a field and pull up information about the field’s soil type and associated properties.

Aggregate stability can be determined by a lab, or you can figure it out yourself in the field using a slake test or a rainfall simulator, such as the Cornell University Sprinkle Infiltrometer.

To measure soil hardness, or compaction, you or your consultant will need to go to the field with a soil penetrometer. "Measurements must be taken when the soil moisture is at field capacity because dry soil might show resistance without being compacted," Ferrie says. "Look for resistance above 300 psi because that’s the amount of hardness that roots have difficulty penetrating."

There are an array of soil penetrometers on the market, with varying degrees of sophistication.

A logging penetrometer made by Spectrum Technologies measures resistance for every inch of soil. Connected to a GPS unit, it creates a map that identifies density layers in the field. Several years later, the farmer can return to the same spot to see if he has made progress in removing dense layers.

A simple infiltration rate test involves driving a 6" ring into the soil, pouring in a known volume of water and recording how long it takes to soak in the ground.

"Different labs may use different organic matter tests," points out consultant Dan Towery of Ag Conservation Solutions, West Lafayette, Ind. "It’s important to use the same lab each time, for repeatable results. Sampling depth also is important. Soil within 2" of the surface will show changes in organic matter content much faster than soil at 7"."

Another important component of soil health is mineralizable nitrogen. That is ammonium nitrogen, a form that can be used by plants and microbes, which might be provided by soil organic matter during the growing season. "If you know the soil’s potential to mineralize nitrogen, temperature and moisture conditions during the growing season, it will give you an indication of how much ammonium nitrogen will become available," Ferrie says. "That will help you decide whether to make a late-season application of nitrogen fertilizer."

Take a deep breath. Ultimately, soil health boils down to the health of soil organisms, Ferrie says—healthy soil contains more life. "It’s no exaggeration to say the "livestock" in your soil are as important as the livestock in your feedlot or dairy, and just as sensitive to their environment," Ferrie says.

"An experienced agronomist actually can estimate the amount of life in soil by smelling it," Ferrie notes. "It’s the scent you detect when soil is tilled. But this is subjective and difficult to document. So you need to run a soil respiration test and establish a numerical value that you can work with."

Because microbial organisms breathe (sort of like humans), the soil respiration test reflects how many creatures are present, doing their jobs by decomposing plant residue and releasing nutrients for your crop.

The necessary equipment to measure soil respiration is included in some commercially available soil health kits. "Results will vary, depending on soil temperature and moisture levels," Towery adds.

"The soil respiration test can be done in the field or in a lab," Ferrie says. "For repeatability of results, always use the same type of test."

On the road to better health. Studying your soil health analysis report along with your own yield zone map will show you where to start making improvements, Ferrie says.

Like every aspect of management, soil health requires a long-term strategy. "Take your soil samples and measurements in the spring, when soil moisture is close to capacity," Ferrie advises. "Record locations using GPS, so you can return every three to six years and measure your progress."

Some aspects of improved soil health—such as balancing nutrients and pH, removing compaction layers (and keeping them out), installing drainage to manage the water table and applying manure to increase organic matter—probably will boost yield and profitability quicker. Other improvements will take longer.

"Soil health is somewhat like human health," Ferrie says. "The immediate consequences of being overweight and out of shape may not be a big deal when you’re young. But they can shorten your life, or reduce the quality of your life, many years later."

"Improving soil health takes time, maybe several years," Towery says. "Soil improvements you make now may or may not show an immediate benefit to your bottom line. Over time, they will result in a farming system that is profitable and sustainable for you, your kids and your grandkids."

The following four tests can analyze the state of your soil’s health. Most of the tools are included in commercially manufactured test kits.

In many cases, the tests can also be done by commercial laboratories. When tests can be done both ways, it’s a good idea to compare the results of both to make sure they are similar.

Soil hardness, or compaction, can be measured with a penetrometer. An Internet search will reveal several penetrometer manufacturers.

The Cornell University Sprinkle Infiltrometer simulates rainfall onto the soil surface. Apply a given amount of rainfall, and measure how much soil falls through a screen. The more soil remaining on the screen, the better the crumb-like structure and the healthier the soil. You can also use an accessory kit with the Sprinkle Infiltrometer to measure the infiltration rate of water. Drive a ring equipped with a hose that captures runoff into the ground. Use the Infiltrometer to apply a given number of inches of water per hour. Subtract what runs off from what was applied to get the infiltration rate for a given period of time. Or, you can simply drive the ring into the ground and record how long it takes for each inch of water to soak into the soil.

"The slake test involves scraping soil off the surface, dropping it on a screen inside a cylinder and immersing the cylinder in water several times," explains Farm Journal Field Agronomist Ken Ferrie. "If the soil is poorly aggregated, the onrush of water as you immerse the cylinder will blow the structure apart. Then smaller silt and clay particles will fall through the screen." The cylinder on the left in the photo shows properly aggregated soil, and the one on the right shows poorly aggregated soil.

One way to evaluate soil structure is to air dry clods from the same soil type but with different management systems in a jar of water, says Dan Towery of Ag Conservation Solutions, West Lafayette, Ind. With healthy, crumb-like structure (right), soil particles will hold together, bonded by organic matter and by glues produced by mychorrizal fungi, which are found around plant roots. With poor structure (left), the soil falls apart, or "melts away" when immersed in water.

Soil health is on its way to becoming a new buzzword in agriculture, and Cornell University is leading the charge.

The Cornell University Soil Health Team was formed in 2001. The primary goal of the soil and plant researchers was to learn why plants perform poorly in degraded soil conditions, explains Cornell University soil scientist Robert Schindelbeck.

"They concluded soil degradation had reduced the functioning of multiple soil processes," Schindelbeck says. "They realized that soil physical and biological processes, which were not represented in standard soil nutrient analyses, needed to be routinely evaluated."

The researchers set out to develop rapid, reliable and low-cost techniques to measure indicators of essential soil processes. Their efforts resulted in a soil health test that identifies constraints on the functions of healthy soil.

"I’m not aware of any other soil health test that provides the holistic assessment of soil constraints that ours does," Schindelbeck says.

The university’s Soil Health website (http://soilhealth.cals.cornell.edu) describes the test and provides sampling and shipping instructions. A downloadable Soil Health Manual provides more information about the tests. There are links to management strategies farmers can consider to address soil health constraints. For farmers who wish to conduct their own tests of aggregate stability and infiltration, the university offers the Sprinkle Infiltrometer.