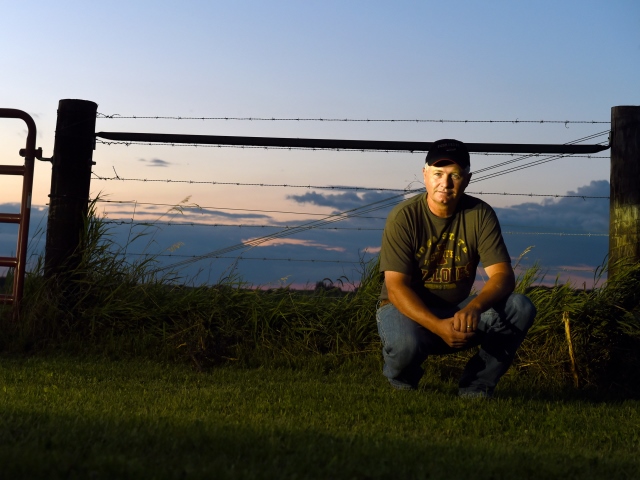 Doug Schroeder had always been around livestock. But Angus cattle and then the Junior program and finally the Certified Angus Beef ® (CAB®) brand took on special significance to the Iowan who steps down next month after a year as the brand’s Board Chairman.

“When we got married, I had some commercial cows and my wife Glenda had some registered Angus,” he says. “We sold them all and bought five registered cows as foundation for our herd. Three years later when we rented a place, we had 10 cows, and now it’s 130.”

Herd growth was steady over time near Clarence, Iowa, in “a county with one stoplight,” but expansion has reached a practical limit, even with the next generation joining in.

“We live in corn country, 50 miles from Illinois, with a lot of 25- and 30-acre pastures and some of those with two creeks,” says Schroeder, who also runs a hog operation with 4,500 annual marketings. “We have to trailer the cattle around for rotations, and that limits your scope.”

Still, he wouldn’t want to farm or raise livestock away from this spot where his great-grandfather borrowed money from a neighbor to buy a farm and ended up buying a place for each of seven sons.

“We still farm a couple of those, and a cousin does. Family is the most important thing to us,” Schroeder says.

As their three children, Jason, Drew and Lauren, followed their parents’ footsteps into 4-H and FFA projects and then area, state and National Junior Angus Association programs, the Schroeders demonstrated their commitment. The couple served as advisors for the Iowa juniors for 13 years.

“They didn’t just show cattle,” their dad says. “They were involved in speech and quiz bowl and everything that was going on. They all received scholarships from the Foundation and the Iowa Angus Association, and today they are all involved in our operation.”

In a sense, Schroeder ran for the American Angus Association Board six years ago to give something back.

“But I never dreamed I would end up being chairman of the CAB Board,” he says. “I’m a cow-calf guy. We sell 20 to 25 bulls and 15 good cows each year, but we sell most of the calves at weaning.”

Most of those bulls go to diversified farmers who feed their steers out, and Schroeder has begun working more closely with them to track progress on carcass value.

“I really believe in CAB and know it adds so much value to our cattle,” he says. “When the feeder gets another $50 and the other grid premiums, he’s in there to bid more for those calves the next year, and then that cow-calf guy can get a better bull so it all works together.”

Looking at the brand before his time on the Board, he already got that, beyond the general notion of adding value to black hides.

“If you really look into it or want to make sure your cattle qualified for all 10 carcass specifications, the first thing that would surprise most people is how hard it is to do that if you’re not really focused on it,” Schroeder says. “And the next thing, that’s a better surprise, is what great tools we have.

“The information in our Angus database is just solid, and it cost nothing,” he adds. “That is really the best thing available to cattlemen today – not just seedstock but to all commercial guys, too. It’s let us develop the kind of genetics that are making it easier to make CAB all the time. But again, it takes focus.”

The trend toward record-high CAB acceptance rates shows the market is stimulating that focus, even as the brand encourages industry-wide relationships.

“We like the way it unites all segments,” Schroeder says. “Some of the most important work we’re doing is helping people at every step along the beef chain to understand each other and what they are all about. Then those people selling or serving beef in the big Eastern cities know the truth. They can speak from experience when somebody tries to say we’re all corporate farmers or don’t care about our animals or something.”

It’s been a rewarding tenure on the Board, but the farm and family are calling for less travel as new grandchildren represent a sixth generation who could farm the land.

“January is my favorite time of year, but not because of weather,” Schroeder says. “It’s because of the new calves. Maybe we just invested a lot in a new bull or were excited to see the first AI calves from another, and how they match up with our cows. Those bulls can make a huge difference in the direction of the herd. And of course, when you have cow families that have been proven over the years, you can’t help hoping they have heifer calves.”

Naturally, talk of young ones leads to a look down the road.

“Our goal has been to get to where we can retire from farming and have the next generation carry on as we live on our share of the herd and land. Our sons and their families are right there with us, heavily involved already, and although Lauren is in banking in Des Moines, she still owns cattle and sometimes we’ll pick her up to go to sales together.”

With prospects for Angus cattle brighter than ever, Schroeder likes the way things look for his family, herd and industry.