GO TO THE HEAD OF THE CLASS – OF DEWORMERS.

When two dewormers are better than one.1

As you know, parasites compete with cattle for nutrition, suppressing dry matter intake and decreasing average daily gain, meaning they literally suck profit from your
operation.2 Which is one reason effective parasite control is critical for cattle performance and profitability.

But did you know that parasites directly suppress the immune system, decreasing the animal’s ability to fight infection or
respond to vaccines?

All these reasons are why choosing a dewormer – or two – is an important decision. Two? Yes. Parasite researchers now recommend using two classes of dewormers (typically one benzimidazole and one macrocyclic lactone) for both effectiveness and to help curb dewormer resistance issues.1 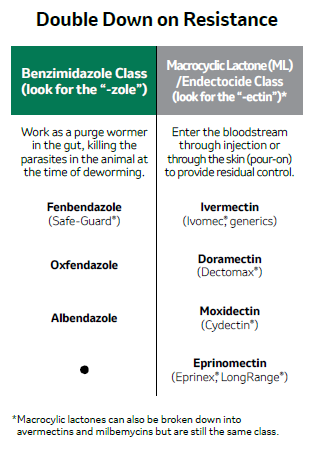 This is why it is important to look beyond brand names and active ingredients and choose products from different classes.

This also ensures that you’re getting both tough internal parasites which “-zoles” like Safe-Guard® (fenbendazole) excel at, including brown stomach worm (Ostertagia), small intestinal worms (Cooperia) and threadneck worms (Nematodirus), as well as the internal and external parasites that endectocides cover. 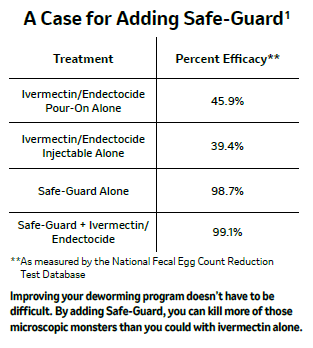 Put Your Dewormer to the Test

Of course, whatever deworming program you’re using, you need to check that it’s working. The fecal egg count reduction test (FECRT) is the gold standard in efficacy testing on live animals. It will not only tell you which parasites you’re dealing with, but also if they’re responding to your current program.

Proper parasite management is the cornerstone of your animal health program.

That’s why understanding which products belong to which class and consulting with your veterinarian can help producers make the right herd health decisions and aid in the development of parasite control programs that help achieve your operational goals.

Be a two-time winner by simply getting more information.

Learn more about the effectiveness of a second dewormer and get a free hat.
That’s two wins in one by filling out this form.