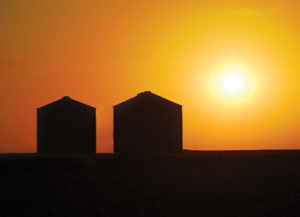 In 2010, Purdue University safety specialists documented 51 cases of farmers or elevator employees becoming trapped in grain—and 26 of them died. Other incidents probably went unrecorded because there is no national reporting system for such accidents. Six of the 2010 entrapments involved youths less than 16 years old.

The Purdue specialists have been recording cases of grain entrapment since the late 1960s. When team members Bill Field, an ag engineer and Extension safety specialist, and Steve Riedel, a graduate research assistant, analyzed this past year’s data, they found some disturbing trends.

Spoiled grain can be deadly. In 2010, there were 13 more entrapments than in 2009 and 37 more than in 2001, which had the fewest recorded incidents since data collection began. The percentage of fatal entrapments is also growing. In 2010, 51% of entrapments in grain bins resulted in death, compared with 42% in 2009.

More than half of the 2010 entrapments occurred when someone entered a bin to loosen crusted, spoiled or frozen grain without shutting off unloading equipment. "There’s a direct relationship between out-of-condition or spoiled grain and the probability of entrapment," Field says.

The worst thing about grain entrapments, Field says, is that "every one is a preventable incident."

All it takes to avoid an accident is common sense. You know the rules; but, for safety’s sake, take a few minutes to review them with your family and employees before you fill your bins this fall. Here’s a quick refresher from Fred Springborn, a Michigan State University Extension educator in Stanton, Mich.:

Ask your Extension staff if there are any grain bin safety workshops in your area. If there are, take your family and employees.

You probably know, or know of, someone who was trapped, or even killed, in a grain bin accident. Don’t be the next victim. As Field says, "Record corn crops should lead to celebration, not tragedy and sorrow."

Don Poore does not want to read or hear of another farmer death from entrapment in a grain bin. If the project he started in his farm shop can save a life—just one—well, it’s worth it.

Poore’s Bin Life Tower offers a secure support for farmers entering a bin. As the bin is unloaded, grain naturally flows to the middle, where the sump is located. If a farmer enters a bin from the side and encounters trouble, he will be swept toward the center, where he can grab onto the tower until help arrives.

Most often, Poore says, farmers enter a bin due to clumps or out-of-condition grain caused by moisture or mold that clogs the sump. Death by suffocation can occur when a farmer becomes engulfed with loose grain or when bins develop a hazardous gaseous atmosphere or lack oxygen.

Using Poore’s tower apparatus, farmers can enter the bin from the top, climb down the tower and address clumps and out-of-condition grain before the bin is completely empty. Working at the grain level prevents sudden grain flows from above and prevents an existing problem from becoming worse. The farmer can then climb back up the tower to exit the bin.

"I came up with this tower design while working," says Poore, who farms near Shelbina, Mo. "I had a concept of how to make it so that it is efficient yet not complicated. From the original design, we worked through some problems of it interfering with other things in the bin. After a couple years, we have a product that is user-friendly and effective in addressing entrapment issues."

The three legs of Poore’s tower prototype are made of 14-gauge steel. From there, 10' sections can be stacked to the height of the bin. The rings are made of 16-gauge steel, 3' in diameter. At the bottom, the tower is secured with three quick-release pins, anchored to a low-profile base surrounding the sump of the grain bin. The sweep can be operated a quarter turn around the bin before the tower needs to be lifted. Once the pins are pulled, the tower can be raised so the sweep can continue unobstructed. The weight of the base is supported by a concrete support under the bin, not the bin floor.

Bin considerations. Some safety specialists are skeptical that the tower will remain upright, so Poore is looking for grain bin simulation tests to analyze the force and weight of grain movements in bins. Unfortunately, no one can yet tell him how much force flowing grain has, as conditions and circumstances vary.

"One idea is that the flow of the grain would knock the tower down, but it’s actually the surface of the grain that flows, not a 10' wall of grain that moves at one time," he says. "If you are pulling grain from the side of the bin with a depth of 16' or 18', the bottom 14' or so of grain will not be moving, thereby holding the tower in place while the grain being taken out flows through it."

Another consideration is the variety of bin systems and designs. Poore’s tower is installed when the bin is empty and sits in the middle of the bin, over the sump.

If placed in a bin with top stirrers, the height of the tower needs to be below the stirrers for them to operate. The only equipment the tower would interfere with is a stirring device that can’t be programmed to reverse before entering the center of the bin.

"I’m reluctant to encourage anyone to enter a grain bin as it is unloading. But farmers are entering their bins anyway. This is a device that, if in place, will make it safer for bin operators to address issues with stored grain before those issues are serious," Poore says.

Poore is talking to a manufacturer about building tower frames for testing in grain bins. He is also working on a website that will have more information. You can contact him with questions by calling (573) 819-8220.