Good News For Soybean Meal Prices, If You Are a Buyer 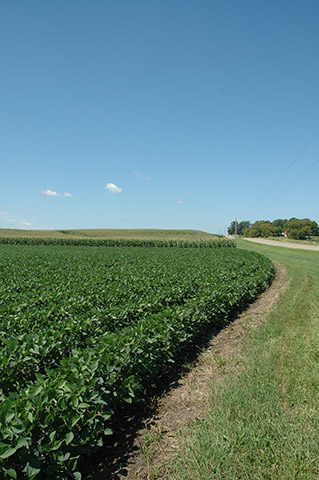 Although soybean meal prices have gyrated wildly this fall, expect prices to settle and even soften as harvest wraps up and crushers move more soybeans through the system, says Chip Flory, Pro Farmer newsletter editorial director.

“Soybean meal will drift back down to the $300 level this fall, back down to levels seen in October,” says Flory. Right now, soybean crushers can’t operate their plants fast enough because margins are so good.

“Crushers are operating 24 hours a day, and the only way they could crush more beans right now if they could operate 28 hours a day,” he says. Logistics are also proving to be a bit of a bottleneck, with sometimes inadequate rail service moving whole beans to the plant and moving meal out.

Corn prices should also remain reasonable moving into 2014. As of this week, just 65% of the corn crop has been harvested. The five-year average is 73% by early November.  And even though harvested corn acres will be down by some 4.5 million acres this year compared to last, yields are extremely strong and could average 175 bu/a.  That’s a 15 bu/a bump over last year.

It’s always difficult to speculate on prices and acres planted for 2015, but it appears an El Nino weather pattern is setting up in the Eastern Pacific. That typically means wetter weather for the Corn Belt, and good corn and soybean growing conditions.

Pro Farmer analysis, which looks at planted acres from the previous year and then adds or subtracts 1 million acres, shows corn prices could range from $3.10 to $3.75/bu in the 2015-2016 marketing year. That assumes an average yield of 167 bu/a.  Under the same scenario, soybean prices could range from $9.50 to as low as $8.25/bu. A $9 price equates to about $300/ton soybean meal prices.  So optimal growing conditions next year mean soybean meal could drift down under $300.