Grain Analysts Accept Inevitable at CME's Board of Trade 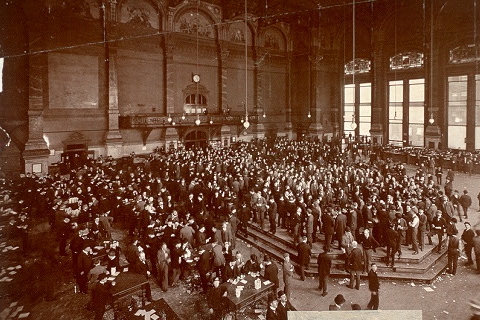 The news that CME Group would be closing legendary open-outcry trading pits in Chicago and New York proved both startling and totally expected among grain analysts this week.

“It was inevitable,” Chip Flory, editorial director of Pro Farmer and host of Market Rally with Chip Flory, said on Thursday. “We knew it was coming. But it’s one of those things that when it comes and you get the word, it’s sad.”

CME will close most of its live future trading pits by July 2, saving $10 million and shifting the loud, boisterous process to the electronic exchanges that now dominate. On Feb. 4, for example, open-outcry trading represented just 4 percent of the transaction volume for corn, 5 percent for soybeans, and 1 percent for wheat. Those numbers were slightly higher for livestock, with 8 percent of trades for live cattle from the pits, according to research firm Allendale Inc.

That established level of electronic trading is expected to ease the final transition away from the pits.

“If you’ve been around as long as I have, it’s more of a sad day than actually a day that’s going to change anything,” said Steve Freed, vice president of research for ADM Investor Services, at the Crop Insurance and Reinsurance Bureau annual meeting in Florida. “Ninety percent of our trades in the grain futures are electronic. We knew the technology was coming.”

Analysts agree. "If the same folks take a cubicle and provide the same pit-like liquidity, I don't think the impact will be significant other than the cultural shift," said Alan Brugler, president of Brugler Marketing and Management in Omaha.

“I’d say for 99 percent of potential trading scenarios this will not be an issue for grain or livestock pricing,” said Rich Nelson, director of research at the McHenry, Ill-based Allendale. “We have found no issue with quality of pricing and actually prefer electronic trading due to quicker fills and other factors. Yesterday, the pit accounted for 4 percent of combined grain and livestock activity in futures. We see no real impact for agriculture, as all participants were clearly favoring electronic activity leading into this decision.”

While closing the pits may not affect the markets, the news is causing an understandable outbreak of nostalgia among traders and analysts who remember the noisy, crowded pits of the past.

On his show, Flory recalled January 18, 1988. “That was the first day that I walked into my new job on the floor of the Chicago Board of Trade, and on that day, there were more people in the corn pit than there was in my hometown of Oxford Junction, Iowa,” Flory said. “And they were all crazy.”

Just last year, he visited the floor as a major USDA report was released and had a very different experience. “It was an absolute shell of what it was on the first day when I got there in the corn pit,” Flory said.

“While many of you will no doubt notice nothing different, and I am sure there are a few who cheer on the demise of the pit, this is truly the end of a major era,” wrote Dan Hueber on The Hueber Report. “There is probably no other image that embodies free trade and capitalism more so than traders standing toe-to-toe haggling over prices,  but of course pit trading is not the first, nor will it be the last, activity that has been pushed to the wayside due to technology.”

It surely will give the trading floor a different feel come July. "It's not too impressive to tour the CME and just see a cubicle farm or a massive computer room," Brugler said.

But even those who will miss the pits admit that times have changed and that the market—like everything else—must adapt to survive.

“Ten years ago, I thought open-outcry was the fair way to find price discovery,” Freed said. “You’ve got 1,300 people trading their own money. They’re going to find out what is the right direction whereas now we’re at the mercy of the machine. But if we were to have a weather rally, with the size of the volume we are trading, we couldn’t do it without electronic trading.”

What do you think about the pits closing? Do you agree or disagree with CME's decision?  Share your thoughts on the AgWeb discussion boards.