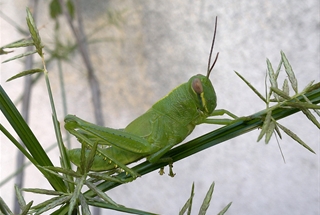 The sign that graces the entrance of Kevin and Mary Ford's farmhouse in St. Leo, Kansas, ushers visitors inside: "Let all guests be welcomed as Christ."

Except, that is, for the grasshoppers.

Part of a disassembled greenhouse leans against the red barn. Acres that should be potato plants are bare. Fruit trees planted in the spring have been eaten down to the bark.

The Fords came back to Kevin's hometown three years ago to follow their dream of operating a small-scale vegetable and livestock farm. They put up greenhouses and planted fruit trees and strawberries. They planted melons and potatoes, tomatoes and asparagus.

But on this sultry September day, Kevin Ford tipped his straw hat and peered out across the four acres where he and Mary's dreams have died.

There won't be produce this year. The grasshoppers, which have overtaken the Fords' farm by the thousands, have run the organic growers out of business, The Hutchinson News reported.

"This is our second year in a row of catastrophic losses to grasshoppers," he said. "We lost our tails last year and lost the rest this year."

While this year's population isn't larger than normal for most of the state, there are probably pockets of areas that have seen increases, said Kansas State entomologist Jeff Whitworth.

Four years of dry temperatures have tormented Kansas, after all. In those areas seeing augmented populations of grasshoppers, the conditions were probably good when eggs were laid in late summer to when they hatched in the spring.

"Grasshoppers are my No. 1 agricultural pest all across the state," Whitworth said.

The U.S. Department of Agriculture even has a program for grasshopper suppression. The agency shows significant grasshopper infestations from Kansas, Oklahoma and Nebraska west. Last year, the USDA tabulated a light outbreak in the western third of Kansas - with grasshopper populations at less than three grasshoppers per square yard to more than eight. In parts of southern counties along the Oklahoma panhandle, grasshoppers seemed to swarm to more than 15 a square yard. Predictions for 2014 were similar.

Despite projections, it seems like many roaming the outdoors are seeing more hoppers.

His company also cleans seed, and he has noticed that a lot of grasshoppers have come through the combine. He said one of the concerns for farmers drilling wheat is grasshoppers eating off the new growth.

Tom Giessel, who farms in Pawnee County, said a few fields where farmers planted triticale and rye in August for cattle - "the outside ring of the field - up to 50-60 foot, it is pretty well eaten off."

Whitworth said grasshoppers are hardy. Once grasshoppers hatch, they don't usually die until temperatures dip to below 30 degrees. Still, he noted, grasshoppers can be stopped, and it is easier to combat grasshoppers for conventional farmers. Farmers with grasshopper concerns can plant a seed treated with an insecticide that will protect germinating wheat.

Farmers can also spray an insecticide on their fields, which will help kill grasshoppers that tried to feed on the treated plants. Meanwhile, they can also take preventative measures for grasshoppers that tend to congregate on the edge of fields in untilled areas, in ditches and tree rows.

Organically, however, they are tougher to control, he noted. There is a big market for organic alfalfa, and he gets calls from producers trying to figure out how to keep the grasshoppers at bay.

For the organic grower, however, disturbing the soil does help, which exposes the eggs to the winter weather and helps kill them. There are organic insecticides available, but Whitworth said that he hasn't seen anything that can be applied that is effective year after year.

Grasshoppers spring up around him as he walks across the farmyard. They linger on his driveway, in his yard and on the trees. They even ate the fiberglass screen on his greenhouse. He replaced it with a metal one.

Still, it's just 25 percent of the population he had mid-summer, which he figured was 30 to 40 grasshoppers per square yard. He even had a dozen ducks roaming the greenhouse to curb the hoppers, which still seemed to find their way inside, but the ducks couldn't keep up with the large quantity.

Their operation, Fiat Farms, was a Community Supported Agriculture operation where people could buy memberships and then purchase product throughout the year. They had an on-farm store set up in the barn. This spring, they planted 2,000 strawberry plants in anticipation for a better year, along with the vegetables.

All he and Mary have left is a crop of tomatoes, which are damaged by grasshoppers.

The Fords even had a partner, another young family who moved to the area. That family, however, left earlier this year - moving to Michigan - when it was realized with the grasshopper situation the farm couldn't support two families.

The couple sent out an email last month explaining they wouldn't have produce and were selling their operation to another CSA near Sedgwick.

"We could be the St. Leo grasshopper ranch," Kevin said, trying to stay upbeat. It's not easy for either of them, said Mary.

Financially, it's tough with no crops to sell, Mary said. They do have a hog business, selling meat to customers.

Family has helped out, she said. And Kevin's parents live just down the road.

Mary said they saw an opportunity in Kevin's home county. Both have degrees from private universities, but Kevin's passion is farming. With Gov. Sam Brownback's Rural Opportunity Zone program available for those who move to rural counties, which helps pay a portion of student loans, Kevin left his job teaching theology at Kapaun Mount Carmel, moving the family to Kingman County. Mary home-schools their children, Rose, 6, and Ana, 3. There is also 8-month-old Francis.

"We built a dream here," she said. "It was our dream to run a farm like this."

Kevin flicked a pair of mating grasshoppers off his greenhouse. The offspring would be born next year.

The couple plan to stay in agriculture, producing naturally raised livestock for a niche market. But not in St. Leo. They are still deciding where they will go.