Grassland Still Looks For Other Market As Dropped Producers Respond 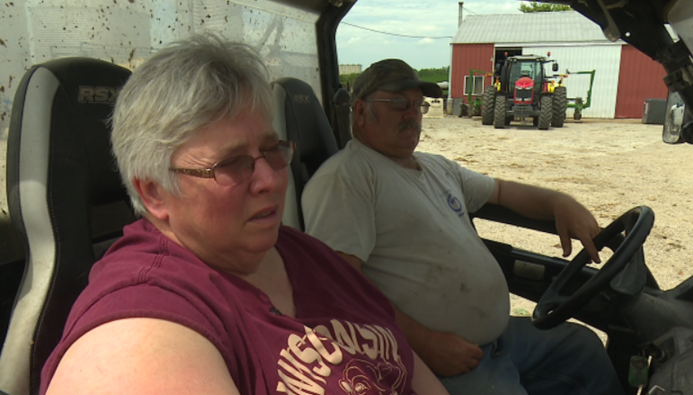 Back in April, Grassland Dairy Products, a processor in Wisconsin, gave notice to dozens of dairies their contract would be terminated by the end of the month. The ax was all due to a change in Canada’s milk market, which would no longer take some U.S. products called ultra-filtered milk.

The Wisconsin Department of Agricultural Trade and Consumer Protection says 58 dairies in the state were dropped, and all but two found new processors.

A dark, quiet, parlor sits empty, quite unusual for a dairy. Milkers, pipeline and farm help are all out of sight for Chwala- T Acres in Jefferson, Wisc.

“All the hard work we put in to get this built up like this, then you get a letter and it can change your life in a second,” said Gerald Chwala, part-owner of Chwala-T Acres.

The Chwala family decided to sell its milk cows.

“It’s hard,” said Emily Chwala, of Chwala-T Acres. “I miss the cows. Couldn’t do much with them anymore, but I miss them.”

They had short notice and limited answers brought a string of sleepless nights.

“It was like we got the letter and we were on our own,” said Emily.

Gerald and Emily spent hours on the phone to find a new processor fast.

“Everyone said they were full,” said Gerald. “We tried and tried for weeks.”

The two showed cattle together in 4-H- turned that passion into a partnership and then a family business with 150 milk cows and 80 young stock. They were forced to sell out and are now getting by raising a neighbor’s cattle.

The Chwala’s are keeping their own calves and young stock, but they’ll be out of business altogether in a matter of years. They say the day before the family sold their final load, the operation received a last minute offer. It was one they couldn’t take.

“If we didn’t sell the cows, we would have been dumping the milk,” said Emily. “They were going to give us base-rate. Plus, we had to pay for all of the hauling. So, we probably wouldn’t even get $14 a hundred. They told us right out, that if someone picks your [milk] up, start to look for someone else to take it because it’s probably only going to be a three to six month [contract].”

“We have not come to the end of those short-term contracts,” said Mark Stephenson, director of dairy policy analysis with the University of Wisconsin, Madison. “As far as I know, producers have not been notified if they will be renewed or continued [with the] relationship. However, I think the determining factor is what the market feels like as we get toward that time when the short-term contracts are finished.”

Dan Smith, who works with agricultural development with the Wisconsin Department of Agriculture, Trade and Consumer Protection, says each processor worked out its own deals. Some of those are short-term contracts but that doesn’t necessarily mean a termination.

Yet, Grassland Dairy Products had said all along they had to drop producers earlier this spring due to Canada’s policy on ultra-filtered milk, something they believe could happen again, possibly to another company.

“This could happen to other processors, yes,” said Goedhart Westers, vice president of business development with Grassland Dairy Products.

Westers said Grassland Dairy Products is still looking for a new market for its product not imported by Canada any longer because Canada has not changed its policy.

“In July, Canada announced they were going to increase the quota in five of the biggest providences,” said Westers. “They do this to fit their butter needs. At the same time, this made them longer on skim milk. That’s exactly the product we were exporting [to the country]. Since Canada increased milk supply, that’s even less of an incentive to work with us on increasing our market access.”

Turning a topic as intangible as trade into real life for these life-long producers.

“Not be a farmer? No, I’d still be a farmer if that’s what you’re asking,” said Gerald.

As the Chwala’s close the door on the future of their dairy, they hope others won’t have to do the same.

“I just wish the rest of the farmers that got shut off, I hope they make it,” said Gerald. “It’s a rough game.”

The Wisconsin-based Dairy Business Milk Marketing Cooperative says most, if not all, of their co-op members dropped by Grasslands have found long-term agreements beyond six months with other processors. They had roughly 25 members of the 58 dairies dropped.

The Chwala’s say their son, who is part-owner of the partnership will take over the farm. They hope their grandson will carry on what’s left of the farm’s legacy as well.